The embattled FKF boss had announced he was back in office after writing to FIFA informing them of the same. 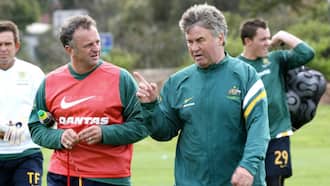 Amina has rebutted claims that the country’s football leadership has been reverted back to Mwendwa. The CS termed Mwendwa’s action as a break-in as he remains out of office as Capital Sports reports.

It is instructive to note that this decision rendered in May has not been vacated/reversed and the FKF Transition Committee remains in office and in charge of football management in Kenya.

The May decision was a High Court ruling that upheld Amina’s move to remove Mwendwa’s team from office. Amina has reiterated that the transition committee is still in charge of football in the country.

As this happened, a section of top-flight clubs led by Gor Mahia have announced that they will not participate in any league that would be run by the Transition Committee. The statement read by Gor Mahia’s CEO Raymond Oruo on behalf of the clubs said, 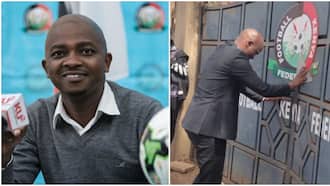 We will not participate in any competition that is not sanctioned by the world governing body, FIFA, because it is a waste of time and investment.

The transition committee had announced that the new season will kick off on October 1st.

Sports Brief had earlier reported that the Football Kenya Federation President Nick Mwendwa, on Tuesday morning, led other members of the federation back to official offices.

Mwendwa announced last week that he was back in office following the Directorate of Public Prosecutions(DPP) decision to withdraw graft charges against him.

He had stepped aside last year and delegated his duties to the vice-chairperson Doris Petra. The offices at Kandanda house had been closed down following Sports Cabinet Secretary Amina Mohamed’s decision to disband the federation.

You may also like
‘There’s never been more buzz around one man passing a drink to another’ – The Indian Express
After his world record-shattering marathon run in Berlin
7 United players who could make their maiden appearance vs City for the club – United In Focus – Manchester United FC News
There are as many as seven Manchester United players
Your Friday Kickoff: What surprises will Week 33 create for Decision Day? | MLSSoccer.com – MLSsoccer.com
FINALLY. The September international break is over
Supercomputer predicts Arsenal Vs Tottenham outcome ahead of huge North London Derby clash – Football.London
A supercomputer has predicted that Arsenal will just
‘I’m still the best,’ insists Kenenisa Bekele before London Marathon tilt – The Guardian
Kenenisa Bekele insists he still deserves to be considered
The three Tottenham players Antonio Conte could be without against Arsenal in North London Derby – Football.London
Arsenal host Tottenham this weekend in a huge new installment
Every word Mikel Arteta said on Thomas Partey fitness, Emile Smith Rowe and Arsenal vs Tottenham – Football.London
How’s the team looking? We just finished the last training
Ten Hag press conference: Maguire out; Rashford & Martial could face City – United In Focus – Manchester United FC News
Manchester United manager Erik ten Hag has conducted
Go to mobile version