Oleksandr Zinchenko was almost grabbed by a steward who mistook him for a pitch invader during the comeback win against Fulham on Saturday, August 27.

The Ukranian has been impressive since coming to the Emirates from Manchester City, but had to sit out the London derby against Fulham due to injury.

Arsenal were looking for a fourth straight win to maintain their lead at the top of the table, but things almost threatened to go awry after a howler from Gabriel saw the inform Cottages striker Aleksandar Mitrović get the opening goal. 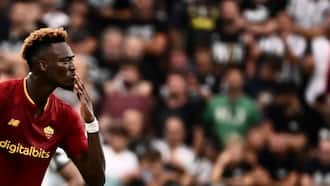 But Martin Odegaard, another in-form Gunner, found the equaliser moments later with a deflected striker, and Gabriel made up for his earlier error with a scrambled finish from close range with five minutes to go.

Gabriel’s late goal to turn the game on its head sent fans into delirium, including Zinchenko, who was clad in his own civilian clothes for the game.

Like his teammates, the Ukranian also jumped onto his players in excitement as the crowd went wild, but one steward was left puzzled.

Sky Sport cameras managed to capture the incident and the steward approached Zinchenko before eventually backing off once he realised it was an a case of mistaken identity.

Fans who noted the incident took to social media with interesting reactions:

“Would have been even better if that steward tried to take down zinchenko after the goal though.”

“Was the steward coming for Zinchenko???”

The win ensures Arsenal remain at the top of the table with four wins from four and Mikel Arteta’s next five fixtures strongly suggests his side will remain top for a while.

After the Fulham test, Arsenal will host Steven Gerrard’s Aston Villa at the Emirates on August 31. Being at home, the Gunners are expected to dominate and perhaps take all three points.

Manchester United then come next for Mikel Arteta’s side in what will be their first real test of the campaign on September 4.

Seven days later, the Gunners come up against Everton on September 11 and hopefully they will replicate the 5-1 demolition that took place last season.