There was an awkward moment during the Euro 2020 semi-final clash between Italy and Spain when defender Leonardo Bonucci was mistaken for a pitch invader during celebrations.

Italy, as TUKO.co.ke reported, became the first side to make it to the final after beating Spain 4-2 on penalties after a pulsating 1-1 draw in regulation time. 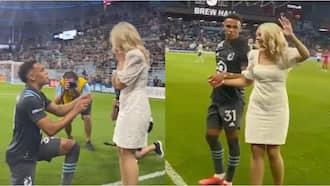 When it mattered from the penalty spot, Spain were not clinical enough as they saw their luck run out after a third successive game which meandered to extra time in the knock out stages in this year’s edition of the tournament.

As expected, Italian players were ecstatic with the win and Bonucci went to celebrate with the crowd after their triumph on penalties.

However, there was a brief oops moment during celebrations when the Juventus defender was approached by a steward who confronted him thinking he was a pitch invader.

The whole thing is interesting to watch as there were several fans dressed in Italian colours in the crowd, hence the possibility of blending with the players.

On the other hand, the steward might have been fully aware Bonucci was a player and the confrontation was simply a way of telling him to keep off the crowd. 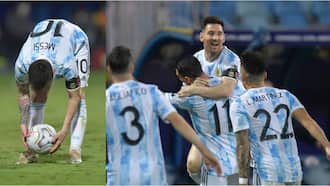 Regardless, the whole scene ignited some hilarious reactions from fans.

“Not fair for him . He’s a good player and the fans and media beat him up . It happens to the best of players,” one said.

“The classic Opel jersey too,” said another.

“No she was saying “they’re not done with you yet…get back there,” another one jibed.

“The toughest match I have ever played in”

After the game, Bonucci was wary of the intensity of the Spain team as he described the semi-final clash as the toughest match he has ever played in.

“This is the toughest game I have ever played. I congratulate Spain for what they showed, but once again this Italy showed heart, determination and the ability to push through difficult moments and the lottery of penalties rewarded us,” Bonucci told RAI Sport.

A supercomputer tipped Italy to go all the way to reach the final and win the Euro 2020 at the expense of England, who were also predicted to beat Denmark in the semis to go through to the final. 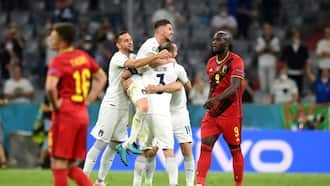 Euro 2020: Clinical Italy see off Belgium in thriller to set up Spain clash in Semis

Based on the fact that the Azurri have not lost a single game in nearly three years, to say they will win the Euros is not far-fetched at all.