Barcelona Legends 2-3 Real Madrid Legends: Watch all the goals and highlights as Ronaldinho rolls back the years – Sportskeeda

Real Madrid legends and Barcelona legends contested an El Clasico that rolled back the years with some quality football on Tuesday.

Real Madrid legends didn’t take long to put together some impressive moves of their own and were level in the second half when Pedro Munitis scored from a rebound.

Amavisca’s shot was too hot to handle for goalkeeper Codina, and Munitis had the goal at his mercy for the rebound. 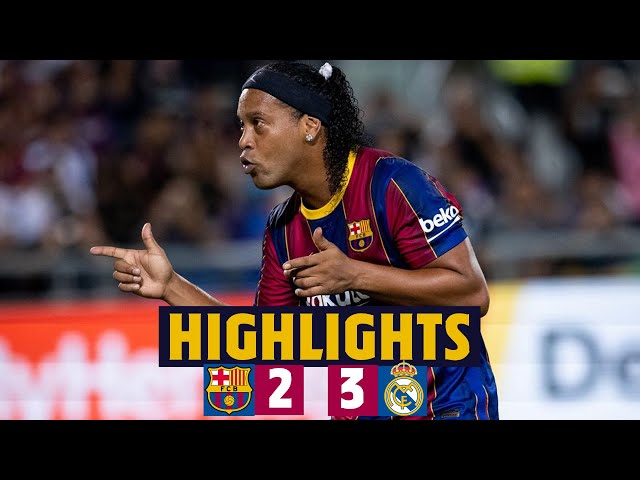 The veterans in white then took the lead through an Alfonso Perez goal after some brilliant work by Munitis on the right. Perez’s shot was not the most convincing, but the Real Madrid legend will probably tell you that he meant it.

Barcelona legends went in search of an equalizer and found one when Jofre Mateu took on two Real Madrid legend defenders and slotted the ball past the goalkeeper.

Real Madrid legends eventually won the game through a strike by Ruben de la Red, who slalomed past the Barcelona legends defense to place a perfect shot into the far corner.

The Brazilian rolled back the years with his lovely smile and impressive moves on the pitch.

It wasn’t just the pre-match tricks that wowed the fans as he often moved forward with his classic verve and could have scored a wonderful goal early on.

Despite being out of action for several years, the two veteran sides turned it on at times, and it was nice to see them play an El Clasico with a smile on their faces.