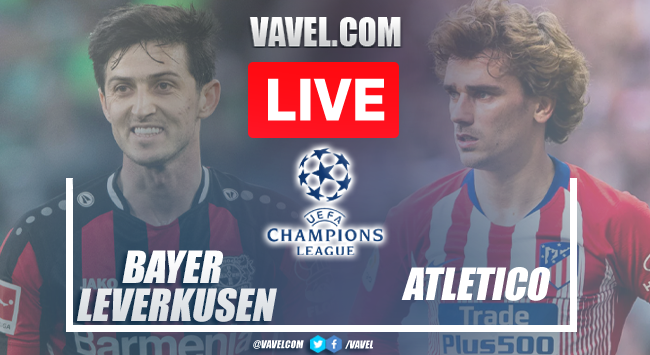 The match is over and Bayer takes the victory at home.

Griezmann’s shot is blocked by Hincapie.

Goal, goal, goal for Bayer Leverkusen! A great run by the home team, a great shot for Diaby who finishes in great form to score the second.

Goal, goal, goal for Bayer Leverkusen! Andrich shot from outside the box and opens the scoring.

Griezmann’s header for Llorente, but he ends up losing the ball.

Schick came close to opening the scoring, but failed to score correctly.

Atletico’s change. Carrasco and Griezmann are substituted by Mandava and Molina.

Good clearance by Grbic, avoiding the arrival of the locals.

The second half restarts at the BayArena

Halftime in Leverkusen, the score is still not open for either team.

Félix’s cross, but the ball is blocked by the defense.

Hermoso’s cross and Felipe tries to shoot at goal, but the ball goes wide.

Back-and-forth match, both seek to generate danger in the opponent’s goal.

Both teams are already on the field warming up before the start of the match.

Bayer Leverkusen are already at the BayArena and will be looking to make it three points and give a good performance tonight.

Atlético de Madrid has already arrived at the Leverkusen stadium and will be looking for their second victory.

They did not negotiate!

Despite rumors of a possible return of Griezmann to Barcelona, from Atletico ruled out his departure.

Since 2020, Atletico has not won two consecutive victories at this stage of the Champions League.

Watch out for the data!

Atletico have lost six of their last seven matches in Germany, so they will be looking for a victory.

Oblak won’t even be on the bench for this match, what a surprise.

We’re back for a minute-by-minute coverage of the match between Bayer Leverkusen and Atlético de Madrid. We will shortly share with you the most relevant information, as well as the confirmed lineups.

In a few moments we will share with you the starting lineups for Bayer Leverkusen vs Atlético Madrid live, as well as the latest information from the BayArena Stadium. Keep an eye on the action with VAVEL’s minute-by-minute live online coverage.

Diego Simeone spoke ahead of the match: “It’s very difficult to be in the Champions League for 10 years. I still feel the same emotions as when I was 15 points behind Valencia in third place in the Champions League. From then on, I am the first one who demands the most from myself and the most self-critical. We have grown a lot and with the possibilities that the club has given us with the players it has brought in, the competition demands the best from you”.

“We are always in search of a positive result and it generates anxiety and rushing, but we are talking about it to get on track behind the game and what soccer asks for after each moment. Porto and Villarreal, the ones that cost us the most were at home, but the team responded very well against Celta and with more tranquility. And we put Cunha on so they wouldn’t say we were going backwards and he came out well with a counterattack”.

I have great respect for German teams, they have a very strong head, they are tough, they don’t let their guard down and they compete very well, like Leverkusen when we played them. Against Brugge I liked them, they played a good game with speed and good play, they lost but deserved more. We don’t imagine anything other than a tidy team that will try to counterattack.”

“I have a way of looking at life that they know. What happened, happened, nobody remembers when something new comes along. What is new is what matters and what positions you all, the club, the players and everyone. We are still looking to evolve and not think about anything other than tomorrow’s game.”

“He is giving us a lot in this role that favors him because he is in front and for his vision that few have. But it is also a reality that he came to play in the middle, as he will do when Giménez and Savic are in the team. I like how he is doing, but we will see him in the middle.”

“I asked for him, I insisted for him to come because he is the one Atlético needs in that position because of his offensive play. He has to continue to grow defensively, but he won’t be the first to do so at Atlético. We trust him, with peace of mind he will give us a lot of things in the offensive game”.

How does Atlético Madrid arrive?

How does Bayer Leverkusen arrive?

The match will be played at the BayArena Stadium.

The match Bayer Leverkusen vs Atlético Madrid will be played at the BayArena Stadium located in Leverkusen, Germany. The stadium has capacity for 30 010 people.

My name is Lore Solórzano and I’ll be your host for this game. We will provide you with pre-game analysis, score updates, and news as it happens live here on VAVEL.