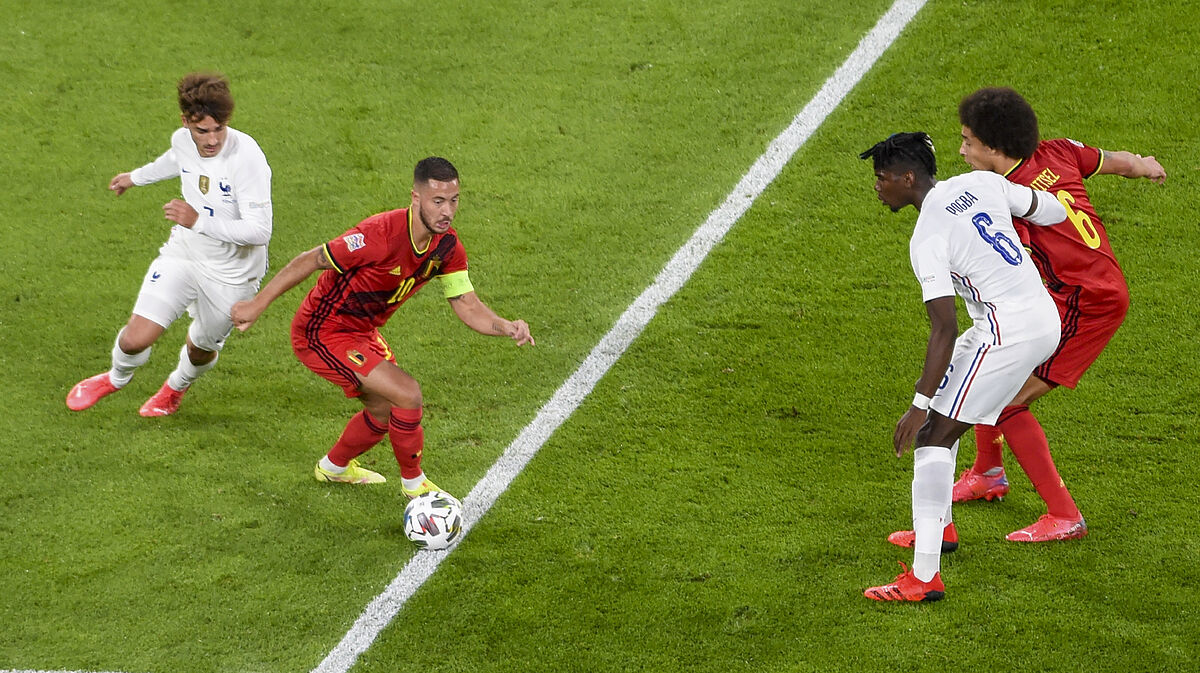 The second semi-final of the Nations League takes place this Thursday night, as Belgium face France at the Allianz Stadium in Turin, Italy. Spain booked their place in the final on Wednesday after beating Italy 2-1, so the winner of Belgium vs France will face La Roja on Sunday night, with the loser set to play Italy in the third-place play-off on Sunday afternoon. Stay with us for build-up to Belgium vs France and then updates from the match itself, which gets underway at 19:45 BST.

This is the start of our live blog for Belgium vs France. We’ll have build-up and preview news here and then minute-by-minute updates once the ball gets rolling, with the entries nearest the top being the most recent.

De Bruyne’s flick saw Belgium give the ball away, which allowed Pogba to fire a shot from distance, but it went miles wide of Courtois’ goal.

Minute 46: France kick off second half

France need to significantly improve in this second half if they are to secure their place in Sunday’s final against Spain. Otherwise, they will have to take place in the third-place play-off against Italy.

Two quickfire goals from Belgium towards the end of the half means that they go into the half-time break with a comfortable lead. France had a fair amount of the ball in the opening 20 minutes but failed to create any clear-cut chances, whereas Belgium have grown into the match and certainly look the more confident side.

Hazard played a one-two with Lukaku before unleashing a shot from the edge of the box, but this time Lloris was able to stop it from going in. Afterwards, Hazard seemed to be wincing. Hopefully it’s not another injury for the 30-year-old.

Wow, what a goal. De Bruyne played a pass into the box for Lukaku, who allowed it to run through his legs before rifling a right-footed shot into the roof of Lloris’ net from a tight angle. Belgium 2-0 France.

Yannick Carrasco breaks the deadlock in Turin. The Belgium left wing-back received a pass from De Bruyne, came in from the left and was too quick for Pavard, as he shimmied away from the France right wing-back before firing into the bottom left corner. Lloris was completely wrongfooted. Belgium 1-0 France.

Minute 31: Belgium appeal for a penalty!

A wonderful move between Lukaku and Hazard led to the Belgium captain going down inside the box, but only after an incredible tackle by Kounde. Belgium – mainly their supporters – appealed for a penalty, but it seemed half-hearted more than anything. VAR is in operation here and nothing has been given, so…

Minute 29: Belgium camped inside France’s half

Belgium are enjoying plenty of the ball inside France’s half and are more or less camped just outside their box, but they are unable to find the killer pass.

Eden Hazard keeps dropping deep to come and receive the ball as he looks to get Belgium going in attack. France are defending well, though.

Minute 16: Castagne lucky not to be booked

Timothy Castagne scythed down Kylian Mbappe in the opening minutes and then went in aggressively on Theo Hernandez after being shrugged off the ball, but the referee has decided to once again keep his cards in his pocket.

Minute 13: Cat and mouse early on

France seem the more comfortable side when it comes to retaining possession, but Belgium are causing more danger on the counter-attack. It will be interesting to see if this changes as the match progresses.

Mbappe’s cross from the left into the box was met by Pavard, who took advantage of Carrasco going to sleep to create a yard of space, but the France right wing-back’s volley was comfortably saved by Courtois.

Minute 4: What a save by Lloris!

Lukaku galloped down the right and sent in a cross which was only half-cleared by Kounde and that allowed the ball to sit up for De Bruyne to strike a half-volley at goal, but Lloris got down to his bottom corner to turn it around for a corner. Brilliant save.

Whenever Belgium have had possession in these opening few minutes, they have looked to get in behind France’s back three by playing passes for Lukaku to run on to.

Belgium get us underway here at the Allianz Stadium. What a match we have in store! Stay with us for all the key updates from Belgium vs France.

Mbappe is just 22 years old, yet today he will make his 50th appearance for the French national team. In that time, he has scored 17 goals and provided 12 assists, while he has also lifted the World Cup.

Theo and Lucas Hernandez are lining up together in France’s starting line-up for the first time tonight, and as such they are break the record set by Jean and Lucien Laurent in 1932.

Curiously, Belgium have the better head-to-head record against France, having won 30 times against Les Bleus. But, it is France that have the better recent record. It should be interesting to see which side comes out on top tonight.

17:45 BST: The last meeting between Belgium and France

Belgium and France last met at the 2018 World Cup, when Samuel Umtiti’s goal in the 51st minute was enough for Les Bleus to advance to the final.

France could start the two Hernandez – Lucas and Theo – brothers tonight, and after Theo’s birthday yesterday, he is clear what his birthday wish is: to beat Belgium.

Belgium’s social media team have posted some photos from the venue for tonight’s match, which is Juventus’ home, the Allianz Stadium.

Amajor clash awaits in the UEFA Nations League on Thursday night, as Belgium face France at the Juventus Stadium.

The two sides last met in the semi finals of the 2018 World Cup where a Samuel Umtiti header sent Les Blues to the final, which they went on to win.

The same coaches remain on either dugout, even though both Roberto Martinez and Didier Deschamps had disappointing Euro 2020 campaigns last summer. The Belgians were eliminated by eventual winners Italy in the quarter finals while the French outfit suffered a shock exit at the hands of Switzerland in the round of 16.

With the spotlight very much on both coaches for different reasons, passage to the final of the Nations League, and eventually winning it, would alleviate some doubt that pursues them.

Belgium vs France: When does it start?

Belgium vs France: Where to watch it?

Football fans in the United Kingdom can watch Belgium vs France on Sky Sports on Thursday night. Meanwhile, those in the USA can tune in through ESPN2, UniMas, TUDN, fuboTV, Sling Orange, Hulu + Live TV and Vidgo.