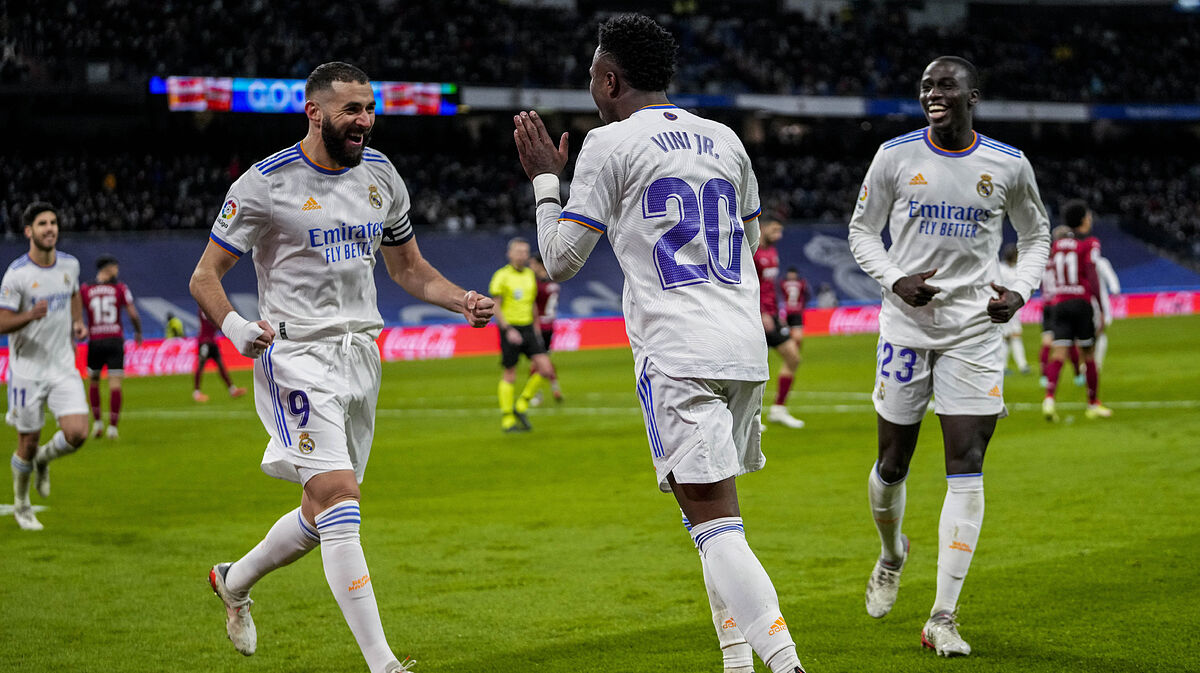 Real Madrid re-established their eight-point lead at the top of the LaLiga Santander table on Saturday night after beating Valencia 4-1 at the Estadio Santiago Bernabeu.

Karim Benzema converted a penalty to open the scoring for Los Blancos before two second-half goals from Vinicius Junior saw Carlo Ancelotti‘s side pull away from Jose Bordalas‘ charges. Goncalo Guedes pulled one back for Valencia from the penalty spot, but by then it was too little too late. Benzema then added another for Real Madrid in the latter stages of the match.

The first half was a rather drab affair, but the match kicked into life when Luka Modric hit the crossbar in the 40th minute. Vinicius played the ball to Modric on the edge of the box, and that led to the Croatian shifting the ball away from Jose Luis Gaya and Hugo Guillamon before sending a left-footed shot towards goal that hit the crossbar and bounced down, but back into play.

Inspired by Modric‘s effort against the crossbar, Casemiro charged forward from midfield 90 seconds later and ended up winning Real Madrid a penalty. The Brazilian made his way into the area with the ball and collided with Omar Alderete, which led to Alejandro Hernandez Hernandez pointing to the spot. Benzema stepped up and made no mistake, sending his shot into the roof of the net.

The opening of the deadlock meant that Valencia had to come out in the second half with more desire than they showed in the first, but that was not the case. Instead, Real Madrid continued to be the far more positive side and ended up being rewarded with more goals.

Just seven minutes into the second half, Vinicius played a one-two with Benzema and then managed to force the ball through Valencia‘s centre-back pairing of Alderete and Mouctar Diakhaby before keeping his composure and placing his effort into the bottom right corner.

Then, nine minutes later in the 61st minute, the game was all but over as a contest as Vinicius made it 3-0. Real Madrid won the ball back in Valencia‘s half and quickly counter-attacked, which resulted in Marco Asensio getting a shot away from inside the area that was parried by Jasper Cillessen and then headed into the back of the net by Vinicius, who was a couple of yards out.

There was some hope for Valencia that they could at least head home with a goal, as Thibaut Courtois pulled off an excellent save to stop Daniel Wass‘ impressive half-volley. With 15 minutes to go, they were given a great chance to get on the scoreboard after Ferland Mendy pulled down second-half substitute Marcos Andre in the area. Goncalo Guedes stepped up and saw his penalty saved, but he headed in the rebound.

The scoring did not finish there, though, as Real Madrid restored their three-goal lead with Benzema‘s second goal in the 88th minute. Dani Ceballos, a late introduction by Ancelotti, played a nice pass for Mendy, who sent in a low cross towards Benzema. The No.9 then managed to control the ball, turn and send his shot into the bottom right corner to mark his 301st goal for the club.

This 4-1 result means that Real Madrid have put pressure on second-placed Sevilla by going eight points clear, but it is also another sign of the strength of Ancelotti‘s team this season. With Benzema and Vinicius in this sort of form, they could be in with a chance of not only winning the league title but possibly the Champions League as well.