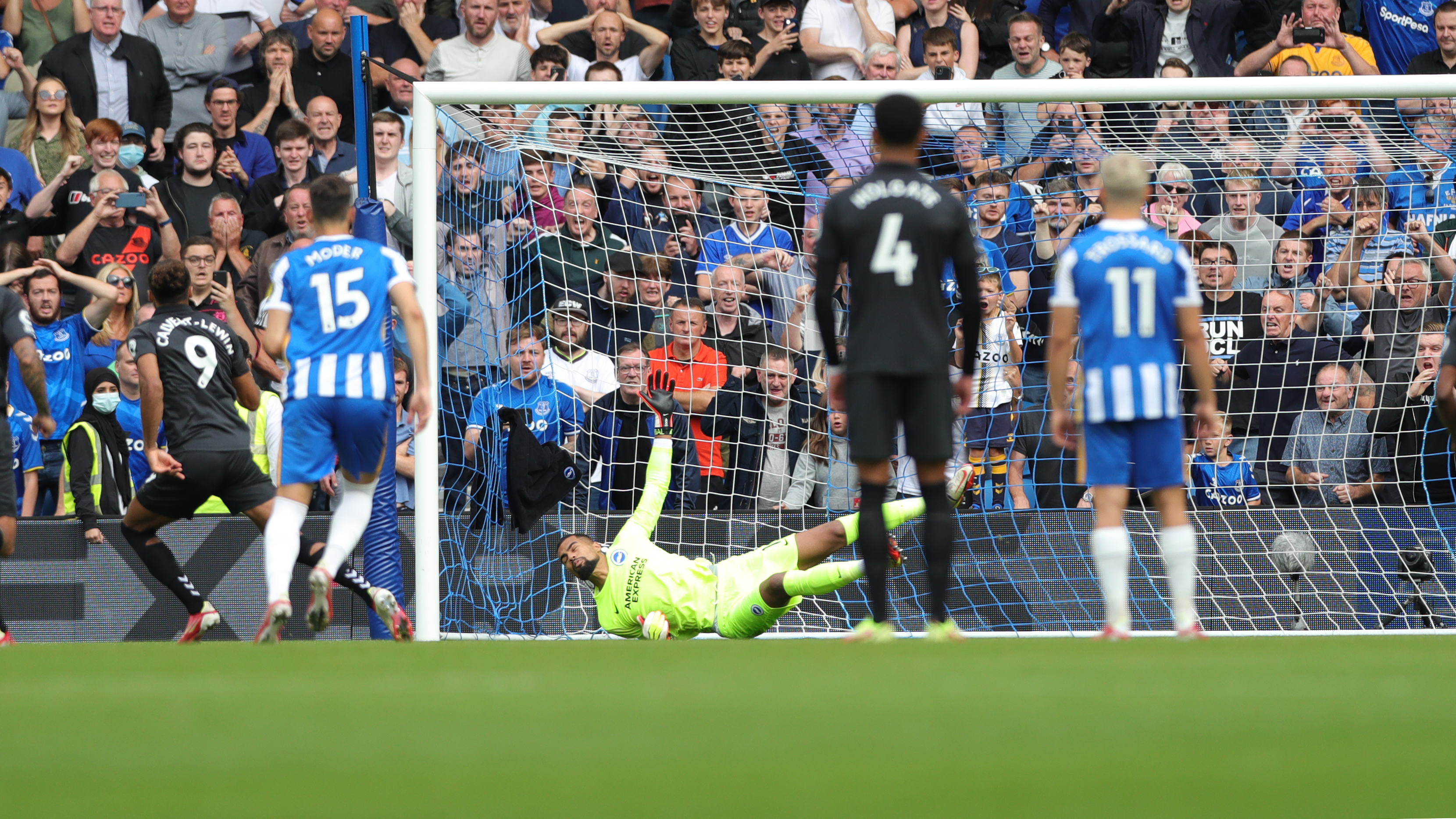 Albion’s 100% start to the season was brought to an end by Everton at the Amex.

Goals by Demarai Gray and Dominic Calvert-Lewin either side of half-time gave Everton their first win in Sussex since 1983, although Albion had their moments.

England keeper Jordan Pickford made a great reaction save early in the second half to keep out Pascal Gross’ free kick when it was still 1-0, but it was hard work to break down a well-organised Everton who defended resolutely and were always a threat on the break.

Albion will regroup during the international break before heading to Brentford on 11 September, when Graham Potter will hope to have a few more players available after Solly March was ruled out against Everton with a tight hamstring.

Leandro Trossard was in the wars early on. Lucas Digne accidentally trod on his foot after just 15 seconds and the Belgian needed more treatment a few minutes later when a stray clearance hit him on the face.

But he and Albion started to stretch Everton’s defence with Neal Maupay’s strike from distance in the 12th minute dipping over the bar after a good move.

Yves Bissouma then started a move with a brilliant pass to Trossard inside his own half, the attack ending with Alexis Mac Allister’s deflected effort flying over Jordan Pickford’s goal.

The hosts had started well but then Everton came to life, although the two chances they created in the space of a minute came after Albion gave the ball away. First Mac Allister gave up possession and Rob Sanchez got down well to his left to keep out Andros Townsend’s shot. Sanchez then cleared to an Everton player and moments later Digne’s shot was flying over the Albion goal.

Bissouma then made a rare mistake when he failed to control a high ball but Richarlison couldn’t keep his shot on target. Everton were now starting to look a real threat and they went in front on 41 minutes. Gray picked up the ball deep in Albion’s half and ran into the box, holding off Adam Webster before driving a right-foot shot across Sanchez and inside the far post.

It was nearly two before half-time after Calvert-Lewin dragged a shot across the face of goal but wide.

Joel Veltman replaced Mac Allister at the break and within a couple of minutes of the restart the Dutchman got into the box and picked out Trossard who couldn’t get his shot away. Pascal Gross then forced Pickford to parry his free-kick from just inside the D with his left-hand as he dived the other way.

Albion had switched to a 4-4-2 to get Moder into a more advanced position down the left but they found themselves further behind in the 56th minute when Veltman was penalised for pushing Seamus Coleman and after a lengthy delay, when Richarlison who wanted to take the penalty was pushed away by his team-mates, Calvert-Lewin eventually tucked it into the bottom left-hand corner.

Trossard stung Pickford’s palms with a decent hit as Albion looked for a quick response, with Danny Welbeck now on up front alongside Maupay. Taylor Richards then came on for Moder to make his Premier League debut with 17 minutes to go. Sanchez prevented a third goal for Everton with a smart save to deny Abdoulaye Doucoure before Maupay exchanged passes with Gross but was stretching as he shot wide.

It was that sort of frustrating afternoon for Albion.

Man of the match: Robert Sanchez