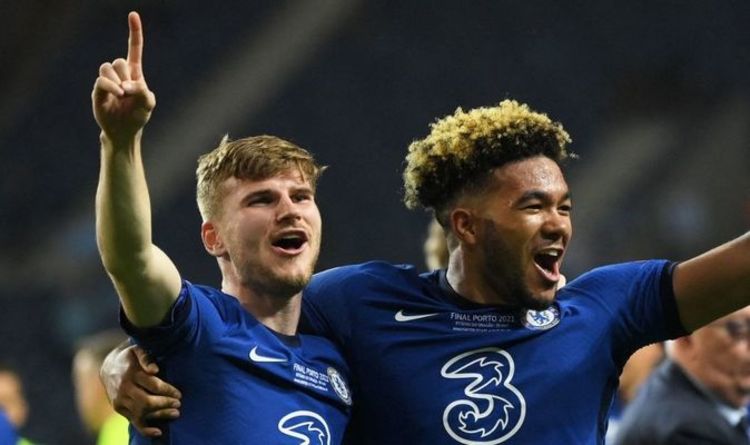 Reece James and Timo Werner could be forced to show their flexibility next season if the Blues manage to get deals for Erling Haaland and Archaf Hakimi over the line. Thomas Tuchel has now identified his top two targets this summer and Chelsea have now made their move for Inter Milan wing-back Hakimi, while contact has also been made for the Borrusia Dortmund sensation.

Inter Milan are under pressure to sell the Moroccan due to their financial troubles. Owners Suning have requested that the club raise £70m in player sales, a demand that forced title-winning boss Antonio Conte out of the door.

If Chelsea managed to wrap up a deal for Hakimi, fans can be forgiven for wondering how his potential arrival may impact Reece James.

The right-back, who has worked his way into the senior side via the club’s academy, has been a revelation since being promoted to the first-team by Frank Lampard ahead of the 2019/20 season.

JUST IN: Chelsea make their move for Erling Haaland with Roman Abramovich ‘confident’ of transfer

But if he joins the club it’s unlikely to affect James’ playing time and the England international could be set for a more permanent position change.

James has also played in midfield since the arrival of Tuchel back in January and is very highly rated by the German.

Furthermore, should Chelsea somehow twist Dortmund’s arm and agree a deal for Haaland, Werner is unlikely to ever play through the middle at Stamford Bridge.

That could of course change if Tuchel alters the system but the 47-year-old is expected to continue featuring from the left.

Although that’s not a clear positional change given how much he played there last season, Werner is a central striker and would prefer to play through the middle.

Even though his finishing and composure has been questionable to say the least, Werner has proven he can still be of use from out wide which is why he rarely lost his place in the side.

His runs in behind the defence have regularly stretched the opposition, while his movement and pace has also created a number of chances for his teammates.

Werner’s goal tally could improve with Haaland is in the side. The Norwegian is likely to occupy and distract defenders, leaving other attackers to pick up the pieces.

Although Werner was brought to Chelsea as their new No 9, his future lies as a wide forward in west London.

Tuchel is now assembling a Chelsea side with immense depth that is also tactically flexible, providing them with all the ingredients to mount a Premier League title challenge next season…

"ELITE IS CURRENT NOT HISTORIC!" Simon says Benítez will go anywhere that benefits him even Everton - talkSPORT

Life, loss and cosas chingonas: Chicharito’s battle for balance and endless search to find himself – Goal.com

Life, loss and cosas chingonas: Chicharito’s battle for balance and endless search to find himself – Goal.com