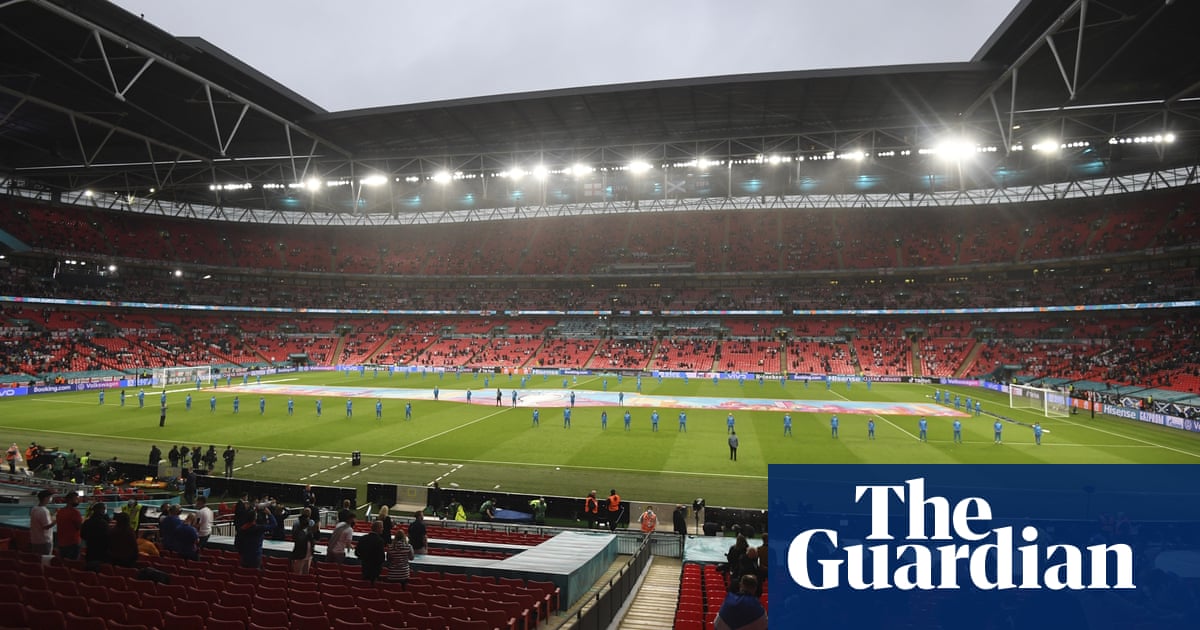 Pressure is mounting on ministers to reassure the public about the safety of hosting the final stages of Euro 2020 and other major events after almost 1,300 Scotland fans tested positive for Covid after travelling to London for a match.

Data published by Public Health Scotland on Wednesday showed that 1,991 people who later tested positive had attended one or more Euro 2020 events during their infection period, a time when they “may have unknowingly transmitted their infection to others”.

Nearly two-thirds of cases reported travelling to London for a Euro 2020 event, including 397 people who were at Wembley for the England v Scotland fixture on 18 June – 15% of the 2,600 Scotland fans given tickets for the match, which ended in a goalless draw.

The news came as 26,068 positive test results were reported across the UK on Wednesday, with 3,887 in Scotland – the highest daily total north of the border since the start of the pandemic.

Downing Street stressed that case numbers were only one of the metrics the government was monitoring, however, as the vaccination programme continues to weaken the link with hospitalisations and deaths.

But given strict 10-day self-isolation rules, the sharp increase in cases across the UK is already playing havoc with businesses and schools, as groups of staff and bubbles of pupils are forced out of workplaces and classrooms after coming into contact with a single coronavirus case.

After the publication of the Scottish data, Prof Stephen Reicher, of the University of St Andrews, a member of the Sage subcommittee advising the government on behavioural science, asked: “Will this year’s Euros be last year’s ‘eat out to help out’ on steroids?”

Prof Christina Pagel, director of the clinical operational research unit at University College London, said the news might explain the gender gap in Scottish cases, which was already suspected to be due to communal watching of the Euro football championships.

“I humbly suggest that this is perhaps more relevant evidence of the impact of big (televised) events on both attendees and watchers, than the small phase 1 government studies,” she wrote on Twitter.

Phase 1 of an official trial of mass events was published last week, and gave an upbeat assessment of the risks. But experts have pointed out that many of the events were held before the highly transmissible Delta variant took hold.

The England-Scotland match was held with a crowd of 22,500. Wembley is set to welcome 60,000 fans for the tournament’s semi-finals next week, and the final on 11 July.

Downing Street said the government would continue to study the data, but the remaining Euro 2020 matches would go ahead as planned.

“Everyone that will be attending the semi-final or the final – or indeed that were watching at Wembley [on Tuesday] night – were taking part in an events research programme that required strict entry requirements including negative tests or full vaccination. And that’s the approach we’ll be using going forward and obviously the results of those pilots will be kept under review.”

But Reicher tweeted: “By opening games to 60,000 fans without any mention of risk, they send a message to 60 million fans at home that the danger has gone away, that it is safe to embrace anyone whether during the game … or indeed at any time. And so, at a time when the race between vaccination and infection is so delicately poised, we create the potential for spreader events in virtually every household.”

The “eat out to help out” scheme, launched by the chancellor, Rishi Sunak, last summer as the government sought to encourage the public back into hospitality venues, was subsequently blamed for an increase in cases as the second wave of the virus took hold.

News of the high number of football fans who have tested positive came at a delicate moment, as ministers prepare to make the final decisions about whether to press ahead with allowing mass events from 19 July, when the last Covid restrictions are expected to be lifted in England.

Sajid Javid, the new health secretary, has already made clear he would like to see as many constraints on normal life as possible removed, in contrast with the more cautious tone on reopening struck by his predecessor, Matt Hancock, who resigned at the weekend.

When Javid was asked about whether scenes of celebrating football fans sent the right message amid rising cases, he stressed that the link between cases and hospitalisation is increasingly being broken.

“Sadly we are seeing a rise in cases. But if you look at hospitalisation and deaths, it is very very sad to see, and no one wants to see that, but we do seem to be doing the most important thing with the vaccine, which is trying to break that link between having a case of the virus and then hospitalisation and that is what is going to help us return life back to normal,” he said.

“We all want to see this nightmare come to an end and that means get out there and get your vaccines.”

Several ministers have underlined that they are keen to see the end of mask wearing, with Sunak saying he would stop wearing his “as soon as possible”.

Boris Johnson has suggested there is a “good chance” of being able to ditch the 1 metre-plus distancing rule, in another sign the government is minded to be much more laissez-faire after 19 July.

And government sources suggest plans for “Covid certificates”, that would involve members of the public being forced to show their vaccine status or evidence of a negative test before entering a mass event, have been ditched. Ministers feared they would be unable to win MPs’ backing for the plans, which many Conservative backbenchers regard as an unacceptable infringement of civil liberties.

Euro 2020 matches are being hosted in London as part of a pilot programme which has included everything from club nights to spectator sports.

Thousands of ticketless Scotland fans travelled down to London on 18 June despite warnings from the Scottish first minister, Nicola Sturgeon, and the London mayor, Sadiq Khan, to stay at home.

It is unclear whether they contracted the virus while in England or were already carrying it before their arrival. No data has yet been published about England fans attending the match.

Under the terms of hosting the Euros matches, about 2,500 football officials and sponsor representatives were allowed to travel to the UK without having to quarantine, although ministers said they would have to take daily Covid tests and would be restricted to official hotels and transport.