Denmark are through to the semifinals of the ongoing Euro 2020 Championship following their 2-1 triumph over Czech Republic at the Baku Olympic Stadium in Azerbaijan on Saturday, July 3.

A goal each from Thomas Delaney and Kasper Dolberg were all Kasper Hjulmand’s men needed to advance to the last four stage of the tournament.

Patrik Schick increased his tally to five goals in the continental competition but his goal was not enough to save them from crashing out despite their spirited performance from start to finish. 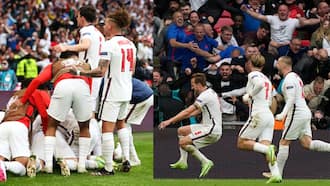 The Danish team got the game off to a blistering start after finding the back of the net just five minutes into kick off via Delaney’s bullet header and Jens Stryger Larsen responsible for the assist.

Dolberg then doubled their lead with three minutes before half time with a close range effort after receiving a superb pass Joakim Maehle in the danger zone.

Schick needed just four minutes after resumption to reduce his side’s deficit while he becomes joint top scorer with Cristiano Ronaldo but his goal couldn’t save them from crashing out.

He will now contend the golden boot award with the 36-year-old winger who has an assist with his five goals in the tournament.

Recall that the Danish team started their campaign on a devastating note after their midfielder Christian Eriksen collapsed in the first half of their opening game.

They went ahead to lose the game to Finland who went away with maximum points after the fixture resumed about two hours after it was stopped owing to the unfortunate situation. 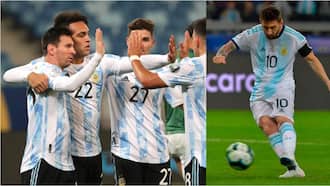 Denmark will now face the winner of England vs Ukraine quarterfinal game on Wednesday, July 7 as they look forward to lifting the title this summer.

In South America, Brazil look like retaining the Copa America title after booking their passage into the semi-finals following a 1-0 win over Chile.

Lyon midfielder Lucas Paquetá scored the only goal of the game in the opening minutes of the second half.

After a goalless first 45 minutes, Brazil got things into gear as Paqueta played a scrappy one-two with Neymar then out-muscled Gary Medel to score from close range.