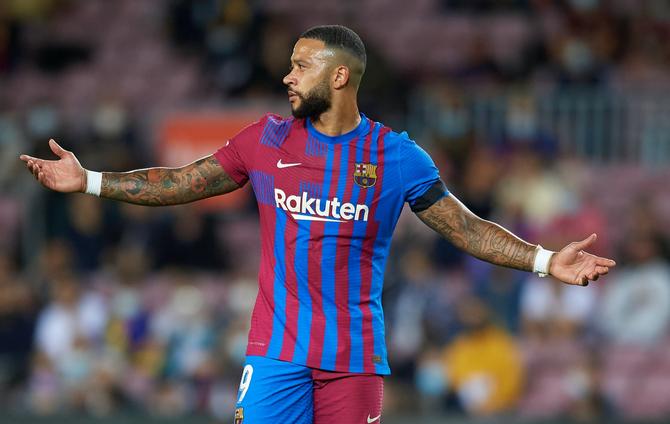 Memphis Depay insists he “would never regret” moving to Barcelona despite Los Cules’ difficult start to the season.

The Dutch forward moved to Camp Nou from Lyon on a free transfer but never got the chance to link up with Lionel Messi, who left the club amid financial difficulties and joined Paris Saint-Germain.

In the Argentine’s absence, Barcelona have underwhelmed, losing both their Champions League group-stage games so far 3-0 to sit bottom of the group and managing just three wins from their first seven LaLiga outings.

Depay, however, is adamant that the privilege of playing for the Catalan giants is more than enough to justify his decision to join, regardless of recent form.

“How could you ask [if I regret the timing of my move to Barcelona]? It’s Barcelona. I don’t think you understand how big this club is and what it means for a player if you move to a club like this. I would never regret it,” Depay said.

The 27-year-old was bullish about the Blaugrana’s chances of turning their season around, dismissing the notion that his new side could be written off amid the mounting pressure on head coach Ronald Koeman after their slow start.

“Despite results, I’m really happy at the club,” Depay continued. “It’s been a difficult time [for the team]. I don’t want to talk about that much, but people are acting like the season is already over.

“There are so many games to play. Everything is still open. But as a player, you feel responsible and you take responsibility. You care. Every player takes responsibility at Barca. That’s normal for a club like Barcelona.

“We know what the situation is right now. We know it’s difficult. [Playing with] young players, a lot of injuries. But I think [it’s just a matter of time].

“Everybody is panicking and for a club like Barcelona it’s a new situation. They’re used to winning everything with beautiful football. This is a new situation, but I am not worried. I’m sure we will turn things around.”

Depay has started the campaign well on an individual level, scoring three goals and notching an assist in his seven league appearances, and will be hoping to bolster those numbers when Barcelona host Valencia in their next game on October 17.