“Today I was just trying to catch up as fast as I could and I was so close at the end,” says Lewis Hamilton after bouncing back strongly from being sidelined in second practice; Watch Sunday’s Dutch GP live only on Sky Sports F1 from 2pm 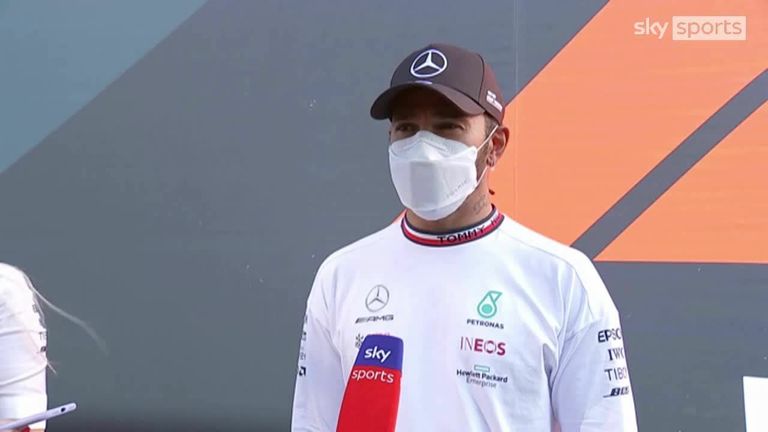 Lewis Hamilton said he was “really happy” to run Max Verstappen so close for pole position in Dutch GP qualifying after losing track time on Friday, as Mercedes boss Toto Wolff suggested the world champion had “outperformed” his car.

The Briton, meanwhile, praised the large Verstappen-supporting home crowd for the “amazing” atmosphere they are generating at Zandvoort’s first grand prix for 36 years.

Amid an exciting qualifying session around the narrow and acrobatic layout, Hamilton finished within 0.038s of Verstappen at the head of the Q3 timesheet to secure himself a place alongside his title rival, who he leads by three points, on Sunday’s front row.

“I’m generally really happy with how today has gone. Considering everyone else has had three practice sessions and I’ve had two,” said Hamilton to Sky Sports F1 in reference to losing Practice Two after an engine-related fault on his Mercedes.

“So today I was just trying to catch up as fast as I could and I was so close at the end.”

Valtteri Bottas qualified third in the sister car and Wolff said: “We need to be satisfied where we ended up.

“Lewis missed out a lot yesterday on running and at the end he put one lap together. We have P2, P3 and that’s a good starting point.”

And as for Hamilton’s final attempt that moved him onto the front row, the Mercedes chief added: “I think he outperformed the car. That was a mega lap.”

As expected, the Zandvoort crowd is generating a vibrant and colourful atmosphere with the 70,000-strong grandstands a sea of orange in support of their home hero.

Hamilton has been on the receiving end of boos from Verstappen supporters at the previous two races in Hungary and Belgium – the events following the controversial collision between the title rivals on the opening lap at the British GP which resulted in the Dutchman crashing out.

Hamilton did again initially receive some jeers in his post-qualifying interview but was then cheered too and, speaking afterwards, said: “They have been nice to me so far.

“I think the crowd has been amazing. I’ve not really received any negative vibes from anybody.

“Coming into the track everyone has been really positive and waving, it’s a really great crowd and at such a beautiful place too.”