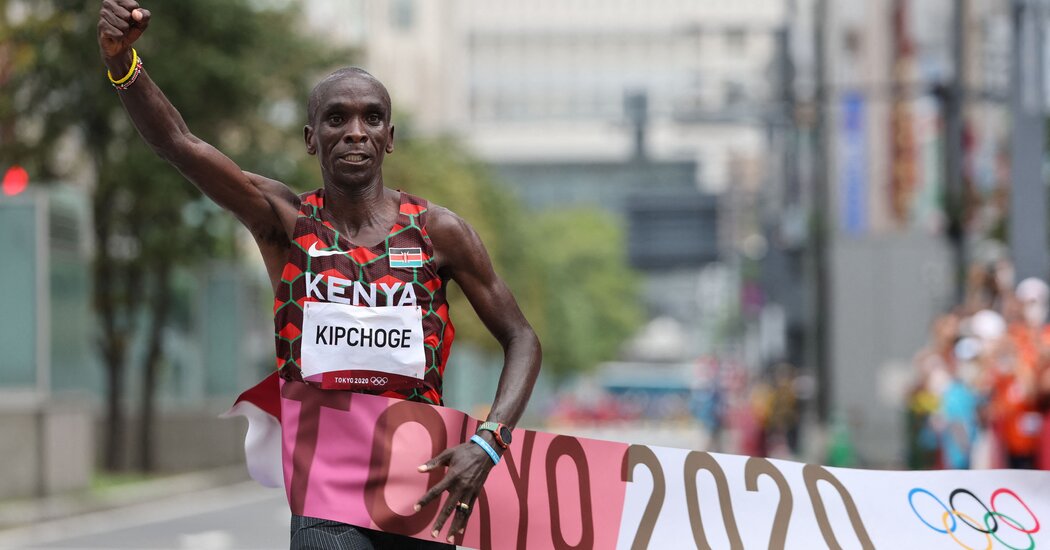 Eliud Kipchoge, 36, of Kenya won his second consecutive Olympic marathon on Sunday in 2 hours 8 minutes 38 seconds, reaffirming his status as the greatest runner in history over the distance of 26.2 miles.

He finished 80 seconds ahead of the silver medalist, Abdi Nageeye of the Netherlands, who ran 2:09:58. Bashir Abdi of Belgium took bronze in 2:10:00.

The race was held in Sapporo, Japan, 500 miles north of Tokyo, in an attempt to offer the athletes some reprieve from the severe heat and humidity in the capital. Still, the conditions were oppressive, with a temperature of 78 degrees Fahrenheit and the relative humidity at 86 percent at the start.

Galen Rupp, 35, the American who won a bronze medal in the marathon at the 2016 Olympics in Rio de Janeiro, shadowed Kipchoge for the first 17.5 miles. At that point, Kipchoge gestured for Rupp to assist by running at the front. Rupp smiled but did not respond, and a seemingly annoyed Kipchoge began to pull away, taking charge of the race and running alone for the final eight-plus miles. Rupp drifted back to eighth place in 2:11:41.

Kipchoge told Reuters after the race: “I think I fulfilled the legacy by winning the marathon for the second time. That’s my total happiness, my inspiration for the next generation.”

Kipchoge did not come close to challenging his world record of 2:01:39 on this brutal day, but he became only the third man to win the Olympic marathon twice in defending his Rio Olympics victory.

Abebe Bikila of Ethiopia took gold at the 1960 Rome Games while running barefoot, and again in Tokyo in 1964, this time in shoes, and famously performed calisthenics in the infield of the Olympic Stadium.

Waldemar Cierpinski of the former East Germany won the marathon at the 1976 Montreal Games and the 1980 Moscow Olympics. But his victories, achieved in a country that operated a well-documented and pervasive system of state-sponsored doping, have come under suspicion.

The dominant success of marathon runners from the East African nations of Kenya and Ethiopia has, in an unfortunate way, made them largely nameless, their regular triumphs often viewed as identical, interchangeable. But Kipchoge has stood out for his speed and consistency, his pioneering achievement and his philosophical nature.

“All of us will be in the same frying pan,” he told reporters about the heat and humidity that were expected in Sapporo.

Kipchoge seemed relaxed from the beginning, bouncing lightly in shoes containing Nike’s latest technology, not bothering to wear a hat, occasionally rubbing small bags of crushed ice across the back of his neck and under his arms and pouring water across his shoulders to remain as cool as possible.

At about 11.5 miles, he smiled and fist-bumped the Brazilian runner Daniel do Nascimento. Four miles later, do Nascimento began to struggle and soon stopped running, collapsing in exhaustion on the side of the road. Kipchoge prepared to make his decisive move. Once he did, it quickly became obvious that no one could catch him.

After all, he had become the first person to run a marathon in under two hours, finishing in 1:59:40 (sometimes reported as 1:59:41) at an exhibition in Vienna in 2019. It was a laboratory experiment as much as a race, occurring in controlled conditions with pace-setting methods and the availability of fluids that did not meet the rules for a standard marathon. But Kipchoge still produced a sense of wonderment that a man could run 26.2 miles while sustaining a pace of 4 minutes 34 seconds per mile.

He entered Sunday’s race having won 12 of the 14 official marathons he had entered, including, in one stretch, a remarkable 10 in a row over seven years. He set the official world record of 2:01:39 at the 2018 Berlin Marathon and seemed unflappable when the unexpected occurred. He won the 2015 Berlin Marathon even though the insoles had begun coming out of his Nike shoes.

A millionaire, Kipchoge is known to live an ascetic lifestyle while training with his running group at altitude in Kenya: living apart from his family, chopping vegetables for communal meals, cleaning toilets, hand-washing his gear and drawing water from a well.

But there is not an infinite number of marathon victories in any runner’s legs. The subtext of this Olympic marathon was this question: Was it going to be a celebration of Kipchoge’s career, or an elegy?

He had seemed potentially vulnerable as of late. His winning streak came to an end at the 2020 London Marathon, in which Kipchoge finished in eighth place on a cold, rainy, windy day when he felt a blockage in his ear and cramping in his hip and legs.

He recovered to win a marathon in the Netherlands in April, but the Olympics would, for many, confirm whether London was just a momentary lapse for Kipchoge or a sign that an unsurpassed career was beginning to decline.

He answered the question unequivocally on Sunday, waving to the crowd as he neared the finish line and pumping his fist in victory at the tape.