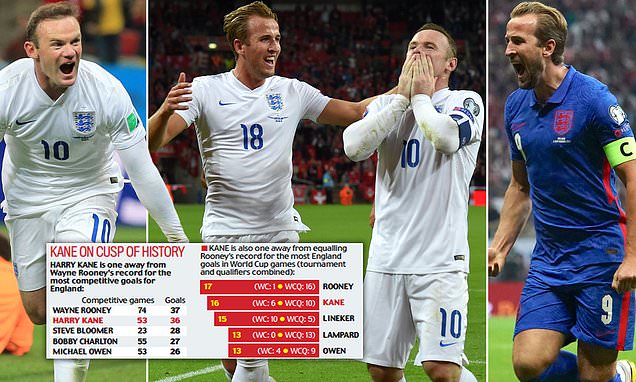 Even despite his underwhelming start to his Tottenham season, Harry Kane is on the cusp of England history when Gareth Southgate‘s men face Hungary tonight.

The Three Lions need two wins from their last three qualifying games to guarantee a spot at next year’s World Cup in Qatar.

And while a victory for the team will remain England’s prime objective in their Group I qualifying clash at Wembley against one of Euro 2020‘s surprise packages, an interesting subplot could be about to come to a head.

Three Lions captain Kane goes into the fixture with 36 goals from 53 games in competitive fixtures for his country.

It is a record that is far superior to legendary greats of the national team like Bobby Charlton and Michael Owen, who managed 27 and 26 goals in 55 and 53 competitive games for the nation respectively.

In fact, the only player who holds a better England record for goals scored is former Manchester United striker and current Derby boss Wayne Rooney.

The 35-year-old scored 53 goals in 120 England caps altogether, with 37 of them coming in the 74 competitive appearances he made.

But he was under no illusion that Kane would come breathing down his neck, with the ex-Everton star last month backing the 28-year-old to break his overall England goalscoring record.

‘I said when I stopped playing that I was fully expecting Harry to get that record,’ said Rooney. ‘He’s a fantastic player, a goalscorer, and obviously he’s got time on his side.

‘I’d be the first to congratulate him. Records are great, of course, but they’re there to be broken.

‘When Harry does break that record, he deserves all the credit and praise he gets, because it’s a great honour to hold that record.’

While tonight will not be THAT night, Kane could at the very least equal Rooney’s record – or better still – be all out on his own for competitive goals for his country.

But how do the stunning records of the duo – who appeared in the same England team on 12 occasions and started together seven times for their country – compare competitively?

There are very few stark differences in terms of the data provided by Opta between the former England skipper and the current incumbent.

One of the biggest differences is their respective minutes to goal ratio, with Kane’s return of a goal every 140 minutes far superior to Rooney’s 225.

However, Manchester United’s record goalscorer netted an incredible 14 braces as part of his competitive England record, a feat his successor has only managed on half a dozen occasions.

Kane has managed competitive hat-tricks on three occasions, namely against Panama at the last World Cup and against Montenegro and Bulgaria – the latter being the last by an Englishman to date – in Euro 2020 qualifiers.

But it is a feat Rooney never managed to achieve for his country once.

Rooney, however, netted six England goals in competitive matches from outside the area, something Kane had failed to replicate once until his dipping drive past Poland’s Wojciech Szczesny in the 1-1 draw in Warsaw last month.

But aside from that it is very tightly contested, with Kane just edging goals inside the box with 35 strikes compared to Rooney’s 32.

However, both players have scored 24 competitive goals with their right foot, and four with their left, while Rooney has one more header.

It is also fascinatingly close when it comes to the arenas in which they have scored for their country, with Rooney narrowly edging it with 15 goals on home soil compared to Kane’s 14.

Rooney is a little further clear when it comes to away fixtures, having also netted 15 goals compared to Kane’s 12.

But it is the Spurs striker who comes out on top when it comes to neutral venues, and which gives a clear indication as to who holds the superior record in World Cup and Euros finals.

In tournament and qualifying games combined, Kane has 16 goals in World Cup games, just one short of Rooney’s 17. The latter rules the roost when it comes to qualifying games for this specific tournament, having netted 16 compared to Kane’s 10.

But when it comes to the big event itself, Kane has found the net on six occasions – all of which came in his only tournament three years ago in Russia – while Rooney’s sole tournament strike came in a 2-1 group-stage defeat by Uruguay in 2014.

However, Rooney currently leads when it comes to goals at Euros finals, having netted on six occasions. Four of those came when he announced himself on the international scene at Euro 2004, while the others arrived in games against Ukraine in 2012 and the infamous Iceland defeat four years later.

Kane, meanwhile, scored all of his Euros tournament goals this summer, netting a brace against Ukraine sandwiched between goals against Germany and Denmark, as Southgate’s men made the final.

There is also very little to separate them when it comes to Euro qualifier goals, with Spurs star Kane netting 15 while his former team-mate registered just one fewer in his 15-year England career.

Kane of course has had the benefit of two editions of the Nations League to add to his tally for competitive goals, but so far has managed just one, which came against Croatia in November 2018 to help his side dramatically seal a place in the semi-finals of the tournament.

It is now six years since Rooney broke Sir Bobby Charlton’s long-standing goals record, which had stood for 45 years.

And while Kane will still have some distance to catch him up on that record even if he is on the scoresheet on Tuesday night, he could take one of the most significant steps towards doing so at Wembley.