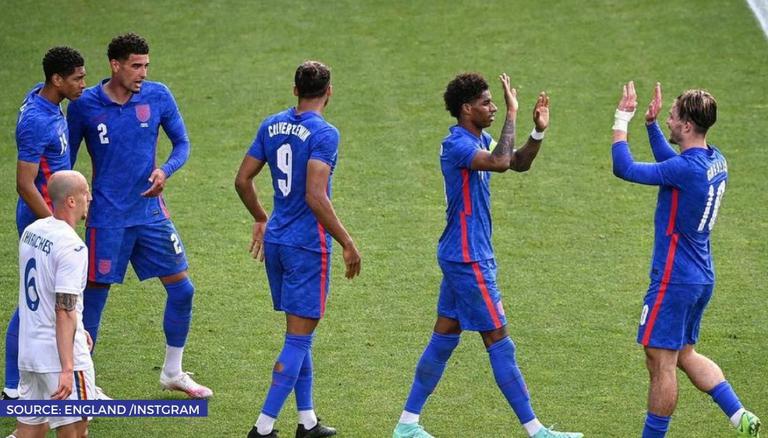 The Three Lions have released the England squad numbers for the upcoming Euro 2020. Gareth Southgate who cut down his 33-man provisional squad to 26 players last week has revealed the numbers which the England players will wear in the European Championship.

The highly anticipated European Championship was postponed for a year amid the ongoing pandemic and is set to kick off in Rome with Italy squaring off against Turkey in the tournament opener on June 11. England will head into the tournament as one of the top teams in the competition and will start as favourites to win the competition. However, they will face tough competition from the likes of Spain, Belgium, Germany, France, Italy, Portugal among others as all the best teams across Europe lock horns to win the coveted trophy.

The Three Lions confirmed their squad numbers for the Euro 2020 with Everton goalkeeper Jordan Pickford set to wear the No. 1 shirt. Team captain and Tottenham Hotspur star Harry Kane will wear his preferred No. 9 shirt with Aston Villa star Jack Grealish set to don the iconic No. 7 for the national team. With Trent Alexander-Arnold ruled out of the tournament due to injury, Ben White has been called up as his replacement with the defender also set to wear Alexander-Arnold’s No. 22 in the Euros.

England vs Croatia time in UK and other details

The Three Lions are set to kick off their Euro 2020 campaign with a match against the 2018 World Cup finalists Croatia. England suffered a heartbreaking loss to Croatia in the semi-finals of the 2018 World Cup and will be aiming to take their revenge on their opponents and also look to kick start their European Championship with a win. The England vs Croatia clash is set to be played at Wembley Stadium, on Sunday, June 13. The kickoff scheduled for  2:00 PM BST with 25 per cent stadium capacity allowing spectators to watch their favourite team in action.

With all of England’s three group games alongside the semi-finals set to be played at Wembley, the 4th ranked team on FIFA standings will fancy their chances of progressing and featuring in the Euro 2020 final. The ultimate match of the European Championship is also scheduled to be played in London at Wembley on July 11 with Gareth Southgate’s men hoping to not only play the final but also win it and lift the European Championship in front of fans on home turf.