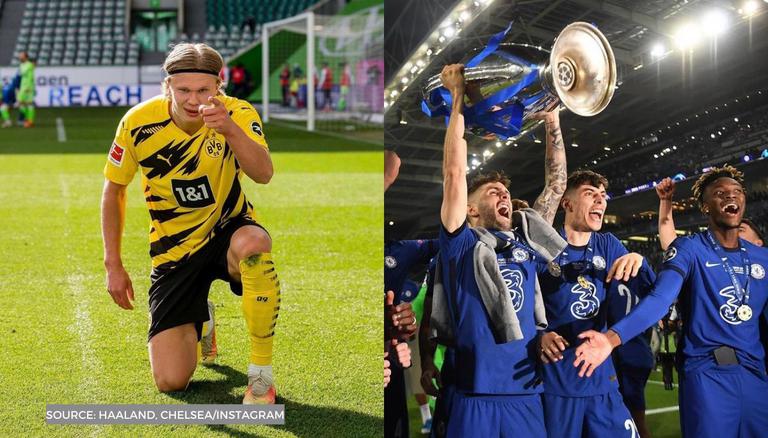 Erling Haaland transfer news sees the Borussia Dortmund striker edge closer with a move to the Premier League as Chelsea transfer news reported how the Blues are steps away from signing the Norwegian striker in the upcoming summer transfer window. Let’s have a look at Erling Haaland latest update and see how close he is to joining Chelsea.

The Dortmund forward has been one of the best No. 9s this season with the Norwegian striker finding the back of the net 41 times in 41 games across all competition during the 20-21 campaign. He has been linked with a move away from the Bundesliga giants in the upcoming transfer window.

The 20-year-old attacker has attracted interest from a lot of clubs with Man City transfer news linking the reigning Premier League champions with a move for Erling Haaland. However, their Premier League rivals, Chelsea, are expected to be leading the race and look likely to acquire the Norway international’s services.

The Blues head coach Thomas Tuchel is reportedly a big fan of Erling Haaland and has asked the club to lure the Norwegian forward to Stamford Bridge. Chelsea owner Roman Abramovich is also said to believe in the German tactician’s vision and the Russian billionaire has given the green light to fund a move for the Dortmund forward.

Erling Haaland price tag not an issue for Chelsea

The Blues are expected to consider Haaland their number one target with head coach Thomas Tuchel considering the Norwegian as a “missing” player who could help Chelsea mount a title challenge next season. Timo Werner’s poor outing in his first season has led the German manager in desperate need of signing a new striker with Chelsea continuing to ‘working intensely’ in acquiring the Dortmund forward’s services.

Borussia Dortmund have time and again shared their thought process of keeping hold of the Norwegian attacker. They have also placed a hefty price tag on Erling Haaland demanding well in excess of £150million for the 20-year-old attacker. However, the Dortmund chiefs could be forced to sell him if Man City or Chelsea manage to fulfil their demand and manage to collect the money for the transfer.

The German outfit will be looking to sell off Haaland in the upcoming summer transfer window rather than waiting for the 2021-22 season which could see Halaand’s value drop down to around £65m due to his release clause. It will be interesting to see how the Erling Haaland transfer pans out with two of the biggest teams across the world battling each other out for the youngster.