When it comes to the promotion of inclusivity and tolerance in football, UEFA continues to talk the talk whilst struggling to walk the walk.

The latest decision from European football’s governing body has seen them ask Euro 2020 sponsors to refrain from using rainbow-colored advertising at stadiums in Baku, Azerbaijan, and St. Petersburg, Russia, during the quarterfinals, tournament partner Volkswagen said on Friday.

“Due to UEFA’s concerns about the legal framework for venues in Russia and Azerbaijan, the association informed us it wouldn’t be possible to use rainbow-colored advertising in St. Petersburg and Baku,” the German carmaker said in a statement on Friday. 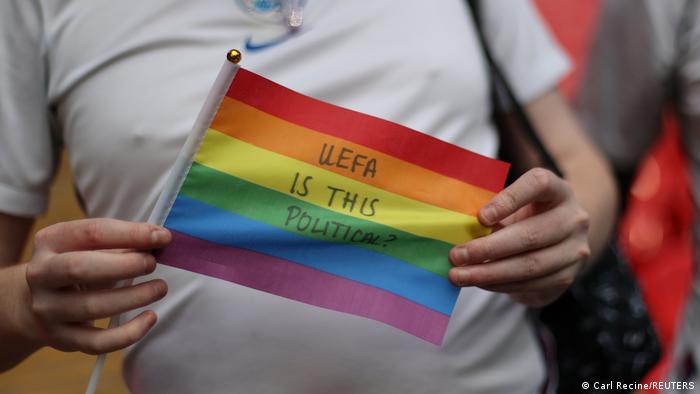 Pitch-side hoardings will remain in place in Munich, Germany, and Rome, Italy, as well as for the semifinals and final in the UK capital, London. Nevertheless, VW said they “regretted” UEFA’s decision because they wanted to continue sending “a clear signal in favor of diversity.”

Ahead Denmark’s quarterfinal victory over the Czech Republic in Baku on Saturday, photographs portrayed stadium stewards confiscate a rainbow flag from Danish supporters.

Two supporters in Denmark jerseys were waving the flag during warmups before stewards appeared to take the flag away.

UEFA told the German DPA news agency that it had not instructed stewards to confiscate flags in the stadium, which it operates during Euro 2020. The football confederation said the flag has since been returned to the fan and the incident is being investigated.

Rainbow colors are the internationally recognized symbol for the LGBTQ communities and have hit the headlines more than once during the multi-country competition.

UEFA last week rejected a request from Munich’s city council to have their stadium illuminated in rainbow colors for Germany’s group game against Hungary, citing the political nature of the appeal.

Several Euro 2020 sponsors, including Volkswagen, instead used rainbow-colored ads in stadiums during the round of 16 matches, although none of those games were played in Russia or Azerbaijan.

In response, UEFA put out a statement that claimed the colors of the rainbow were “a symbol that embodies our core values, promoting everything that we believe in — a more just and egalitarian society, tolerant of everyone, regardless of their background, belief or gender.”

In the fight for respect, tolerance and equality, UEFA’s latest decision continues to send mixed messages during their showpiece summer event.