Skip to content
Home » FA Cup: Crystal Palace come from behind to beat Millwall in the third round – Daily Mail

FA Cup: Crystal Palace come from behind to beat Millwall in the third round – Daily Mail

Michael Olise inspired a terrific second-half Crystal Palace comeback as the Premier League side overcame Millwall to reach the fourth round of the FA Cup.

Millwall were much the better side during the opening 45 with Benik Afobe capitalising on Jack Butland’s indecision to give the Lions a deserved lead.

Palace were much improved after the break and drew level just a minute after the restart, as Olise cut inside onto his left foot before firing unerringly beyond George Long. 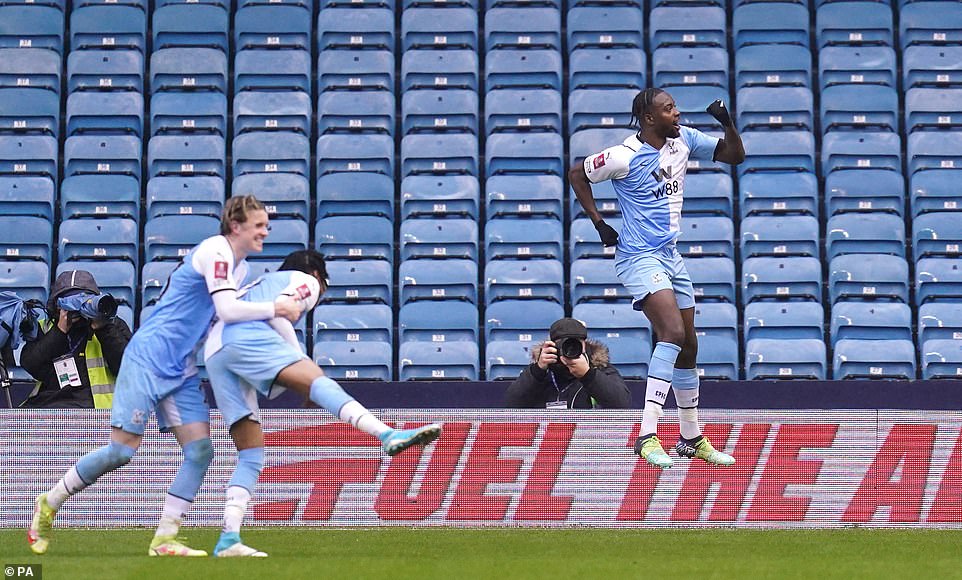 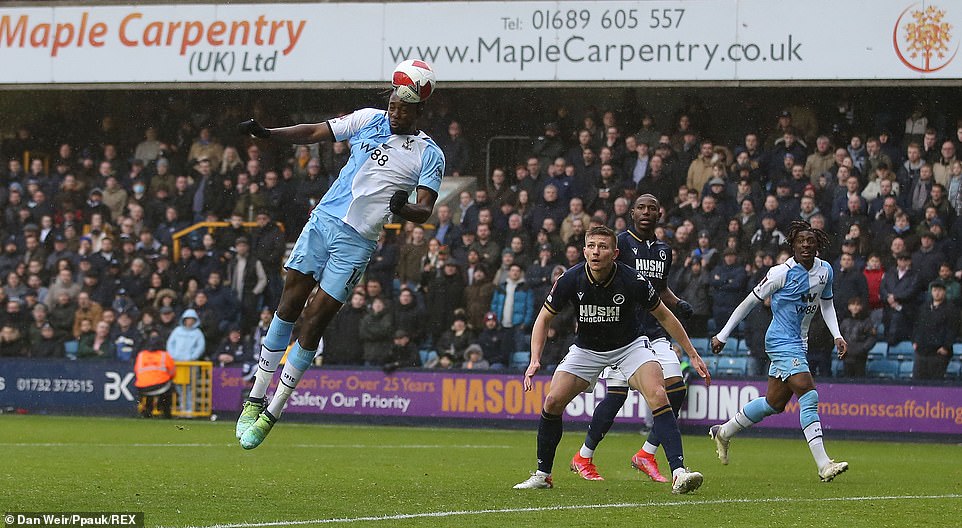 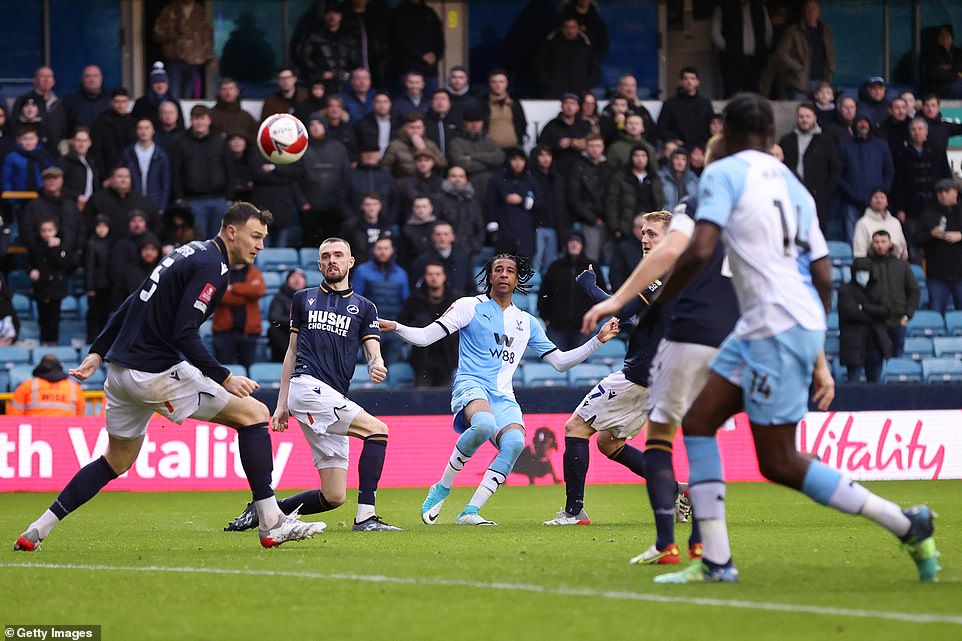 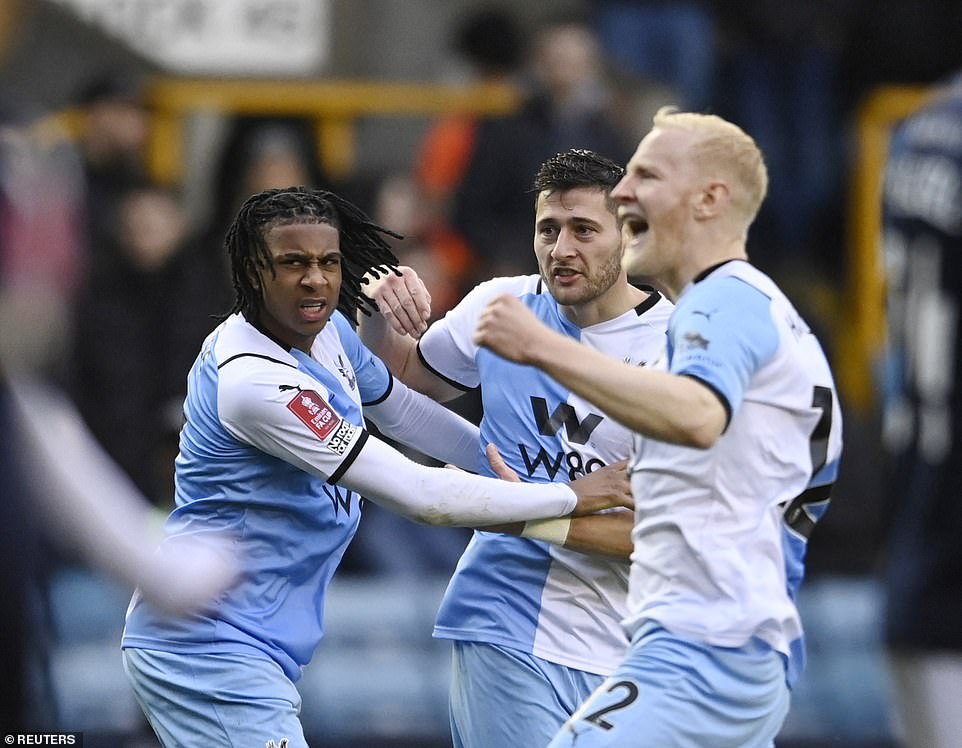 Having struggled to assert themselves during the opening half, Palace re-emerged a different proposition and soon levelled

Olise repeated the trick moments later, delivering a pinpoint cross onto the head of Jean-Philippe Mateta to turn the game on its head.

This new-look Palace team under Patrick Vieira is certainly exciting to watch and the former Arsenal captain is desperate to replicate the success he achieved as a player in his managerial career.

Vieira, a five-time FA Cup winner, made his intentions clear by naming a strong starting XI but he was forced to rotate his front line with Wilfried Zaha and Jordan Ayew on Africa Cup of Nations duty.

Mateta, Olise and Eberechi Eze came in, making up a dynamic front three.

It was the hosts, however, who started on the front foot, Afobe blasting high over the bar when well placed inside the Palace penalty area. 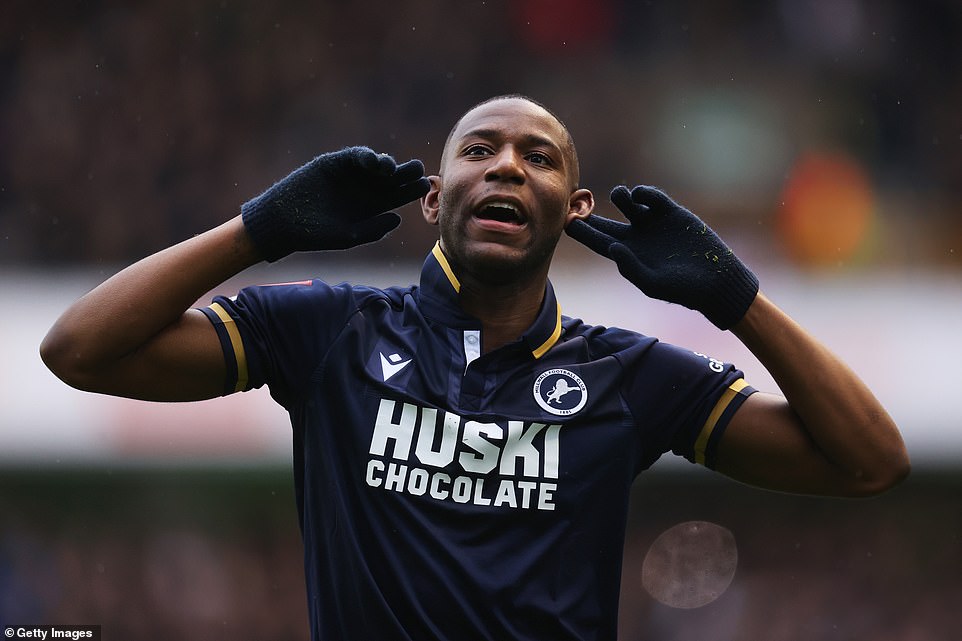 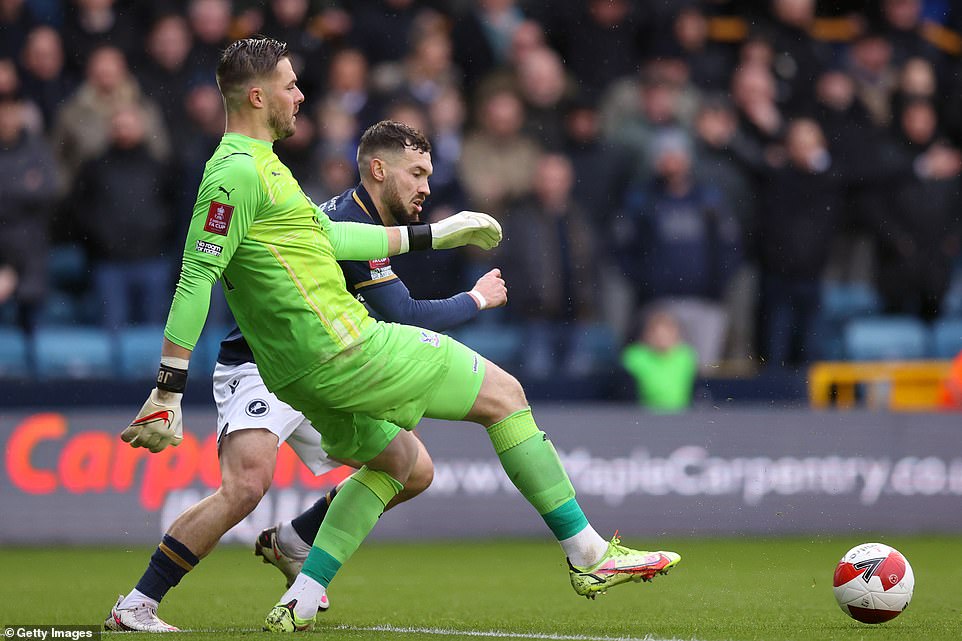 Butland passed the ball straight to Afobe while trying to pass the ball out of defence, leaving the striker with a simple finish

That merely served as just a sighter for the former Arsenal youngster who 10 minutes later capitalised on a horrendous mistake from goalkeeper Butland to give Millwall the lead.

Receiving the ball under a high Millwall press, Butland was caught in two minds and gifted possession to Afobe who pounced to slot the hosts in front.

The Championship side had their tails up. Jack Saville reacting quickest to a long throw to force Butland into a low save to his left.

It took half an hour for Palace to finally get a foothold in the game, Conor Gallagher firing narrowly wide after a strong burst by Eze.

The Premier League side finished the first half on top and drew level just a minute after the restart through Olise. 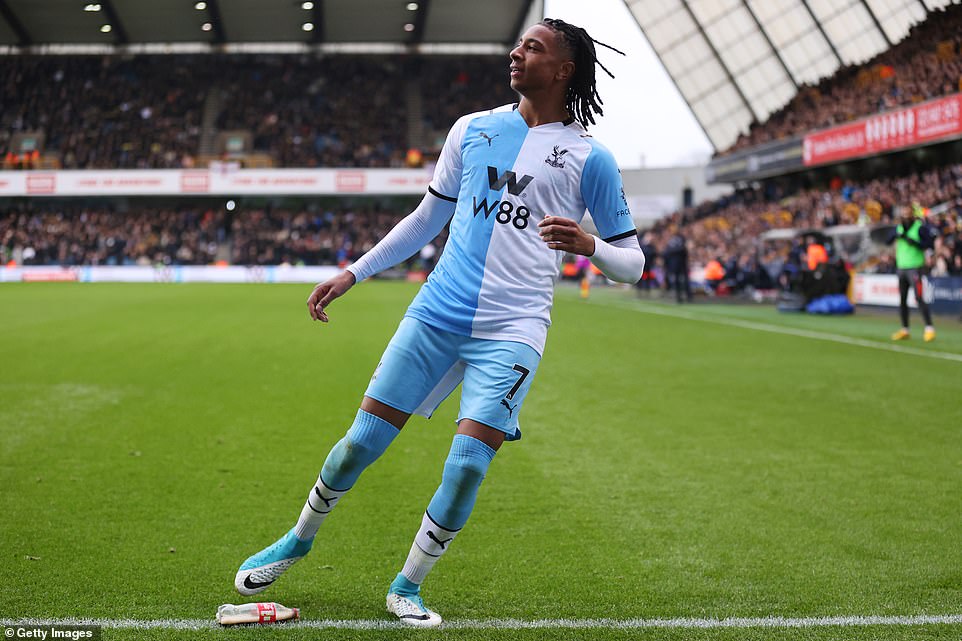 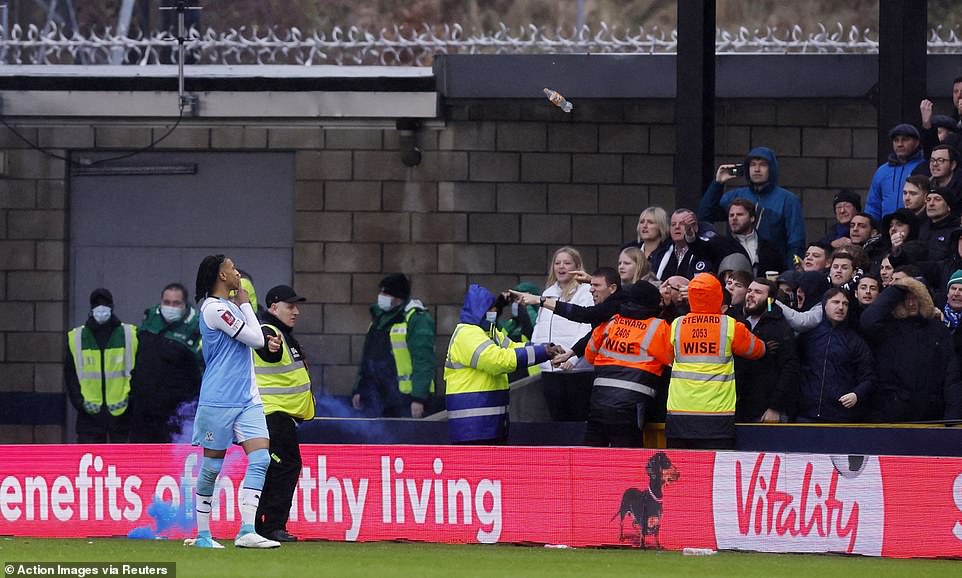 The winger was pelted with bottles, a flare and other objects as he shushed the home fans after Palace had taken the lead 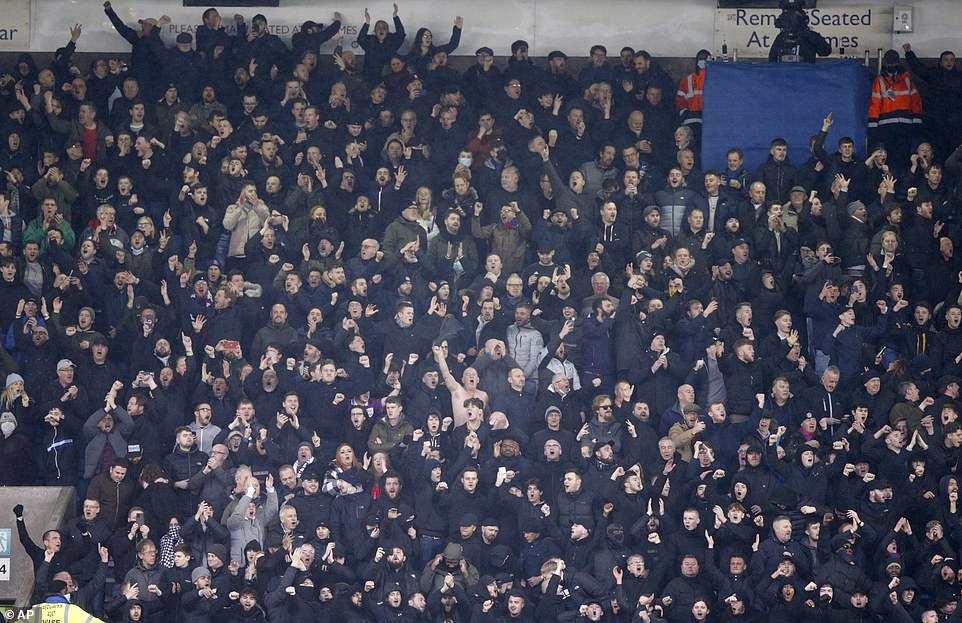 The lively winger stepped inside onto his left foot to curl a terrific strike in off the post to quieten the home support.

Olise then struck the same post moments later after drifting inside onto his left, but this time his effort bounced clear of danger.

It was little surprise that Olise was involved once again just before the hour mark as Palace went in front.

The Eagles broke and immediately looked for Olise, who had created space for himself on the right wing. He then breezed clear before checking back on his left side to deliver a pinpoint cross onto the head of Mateta.

Palace will be hugely grateful to Olise for his game-changing impact and while Vieira continues to mould his new-look team, dreams of replicating his success as a player will certainly be a major ambition for Vieira the manager.