Kenya’s fastest man Ferdinand Omanyala qualified for the 100m semi finals in the Tokyo Olympics after finishing third in Heat 5.

Omanyala kept Kenya’s hopes for a maiden medal in the 100m alive thanks to his heroics which saw him come behind Canada’s De Grasse and USA’s Fred Kerley.

The Kenyan clocked 10.01, which equaled his personal best as he finished in third place in heat one.

Omanyala, who is the lone ranger for team Kenya in the 100m, will now compete in the semis in the hopes of becoming the first Kenyan to make it through to the final in the 100m. 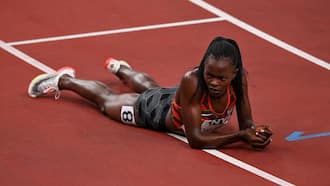 Overall, the Kenyan’s time placed him fifth among all runners on the day, which was quite impressive.

It is also kind to note that his heat comprised of some of the fastest 100m sprinters in this edition of the Tokyo Olympics.

Do you have a groundbreaking story you would like us to publish? Please reach us through news@tuko.co.ke or WhatsApp: 073248269