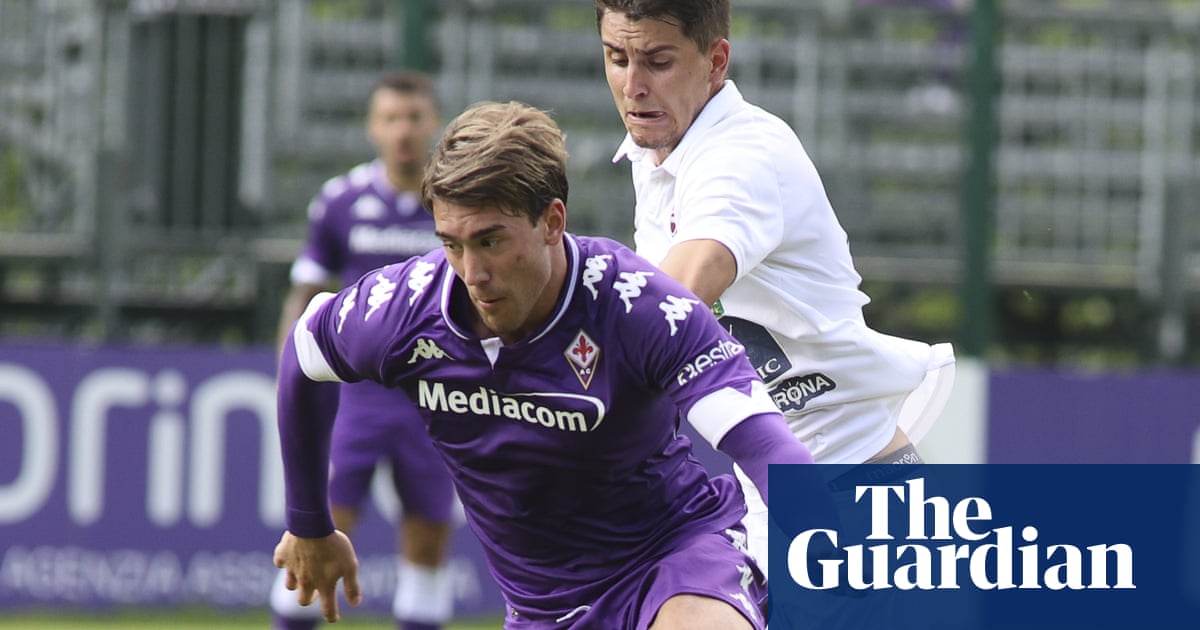 Arsenal have entered the race to sign the Fiorentina hotshot Dusan Vlahovic. The Serb, who scored 21 Serie A goals last season, has been heavily linked with Spurs recently, with Atlético Madrid of La Liga also keen on the 23-year-old target man. Corriere dello Sport in Italy reports that while reluctant to sell, Fiorentina would consider a deal at the right price, but have now set a deadline of Sunday to receive a firm offer from one of the interested clubs.

That may not fit Tottenham’s timeline, however: any concrete offer from Spurs for Vlahovic will naturally depend on how the Harry Kane saga plays out. The forward is due to join Tottenham’s pre-season training for the first time on Thursday, after spending time in isolation following his post-Euro 2020 sunshine break, having rubbished any suggestions of going on strike. He may even feature in Sunday’s opener against Manchester City.

Romelu Lukaku has flown into London – to Biggin Hill airport, of all places – in order to complete his near-£100m move to the European champions Chelsea. Thomas Tuchel’s side, who won the European Super Cup via a penalty shootout on Wednesday night, are crying out for a proven finisher after Jorginho finished top scorer in the league last season with seven goals.

Tuchel and Chelsea have also been linked with a move for the Sevilla and France defender Jules Koundé. But the Mirror report that Monchi, the Spanish club’s sporting director, has rejected claims of a formal bid for a player valued at around £80m. Monchi said: “To this day there is no real offer on the table … obviously, there’s been a lot of noise, a lot of clubs have asked about him.” A come-and-get-him plea from Monchi, if ever the Rumour Mill has heard one.

The Ligue 1 club Lyon have agreed personal terms with Liverpool’s Xherdan Shaqiri but the two clubs remain in negotiations over a fee, as Fabrizio Romano has tweeted. Jürgen Klopp and his money men want more than the €6m on the table.

In more Arsenal news, the Gunners have ended their pursuit of the Sheffield United goalkeeper Aaron Ramsdale after failing to agree a fee with the Blades, who reportedly want £30m for the 23-year-old England youth international. Mikel Arteta wants competition for their first-choice goalie, Bernd Leno, but clearly feels a £30m fee would amount to having his fingers Bernd. (Sorry.)

Newcastle are understandably keen to secure the full-time services of Arsenal’s Joe Willock after he popped up with a number of crucial goals while on loan last season. The £22m deal now seems to have hit a snag, however, with the Magpies and Willock’s representatives still a long way from agreeing personal terms.

Elsewhere, it appears to be all systems go for Jannik Vestergaard’s move from Southampton to Leicester. Reports suggest a fee of £15m has been agreed, and the Denmark centre-back is due to travel to the Midlands to complete a medical and tie up the finer points of his new contract.

Last but not least, Leeds have reportedly agreed a fee with Celtic to bring the 17-year-old Leo Hjelde to Elland Road. The defender spent last season on loan at Ross County, whose manager, John Hughes, tipped the Norwegian as “the next Virgil van Dijk”. No pressure, then.