Manchester United were held to a 1-1 draw by the Toffees at Old Trafford and many have blamed the Norwegian boss for not starting his talisman Ronaldo.

The five-time Ballon d’Or winner came in the 57th minute while the score was at 1-0 in favour of the Red Devils. 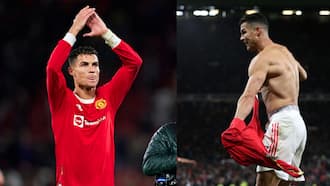 Ronaldo’s best chance in the game was a half chance when Jadon Sancho put him through inside the box but his shot flashed across the face of goal.

The 36-year-old also laid down a glorious back-heel for Sancho but the 21-year-old could not connect to the ball cleanly.

And former England international Agbonlahor was left fuming with Solskjaer’s decision to leave a player of Ronaldo’s magnitude on the bench.

The Villa legend insisted that Solskjaer’s change of tactics was a sackable and unforgivable offense.

“It’s a sackable offence not to start Ronaldo in itself,” the former striker was quoted saying.

“He’s in that squad to win the Premier League this season. Ole Gunnar Solskjaer is not going to win the league for Manchester United,” he added.