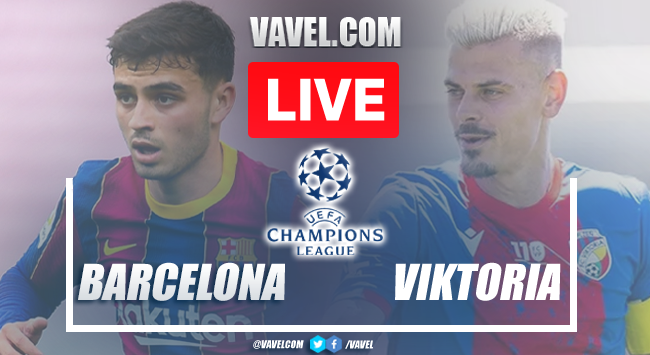 It’s over! Barcelona beats Viktoria by a landslide.

Koundé’s cross is pushed back into the area.

Barcelona dominates the game in search of more goals.

Alba’s cross was headed away by Jemelka.

Barcelona changes. Memphis Depay and Gavi are replaced by Pedro and Dembélé.

Goal, goal, goal for Barcelona! Ferran received an aerial ball, with the tip of his toe he pushes the ball to score the fifth.

Goal, goal, goal for Barcelona! Alba’s cross and Lewandowski appeared to shoot into the goal and score the fourth.

De Jong’s cross, but no one appears inside the box and the defense clears the ball.

Barcelona look for the fourth, but Viktoria’s defense prevents the arrivals.

The match is resumed.

Halftime in Barcelona, the home team beats Viktoria by a big score.

Goal, goal, goal for Barcelona! Lewandoski scores his brace with a header from Dembélé’s cross.

Dembélé’s shot, but Stanek pulls the ball out.

Goal, goal, goal for Viktoria! Sykora pops up inside the box and sends a lethal header into ter Stegen’s net to cut the lead.

Dembélé’s cross, but Sergi Roberto fails to direct the shot.

Goal, goal, goal for Barcelona! Lewandoski blasted home at the far post to increase the lead.

The penalty kick is disallowed, the referee signals a foul on offense.

VAR! A possible foul prior to the foul will be reviewed.

Penalty for Viktoria!!! Christensen takes Mosquera and the referee awards the penalty and sends off the defender.

Goal, goal, goal for Barcelona! Kessié sends Kessié’s cross into the net with a lethal header.

Sergi Roberto sends in a cross, but the ball is rejected and then flagged offside.

The action kicks off at the Camp Nou.

Both teams are already warming up on the field, getting ready to give their all on the pitch.

Barcelona are already at the Sopotify Camp Nou, ready to play a great match in their Champions League home debut.

Viktoria is already present in Barcelona’s stadium, looking for a difficult victory.

Watch out for this

Barcelona announced that Pjanic will not continue to wear the Blaugrana colors this season.

In 2011 these teams met for the first time in this same competition, in both matches Barcelona won.

After a series of accumulated injuries, Ansu Fati will start for the first time in 10 months.

We’re back for a minute-by-minute update on the match between Barcelona and Viktoria. We will shortly share with you the most relevant information, as well as the confirmed line-ups.

Stay tuned for the Barcelona vs Viktoria live stream.

In a few moments we will share with you the starting lineups for Barcelona vs Viktoria live, as well as the latest information from the Camp Nou Spotify Stadium. Keep an eye on the action with VAVEL’s minute-by-minute live online coverage of the match.

Where and how to watch Barcelona vs Viktoria live online

What time is the Barcelona vs Viktoria UEFA Champions League Matchday 1 game?

How is Viktoria coming into the game?

How does Barcelona arrive?

The match will be played at the Camp Nou Spotify Stadium.

The match Barcelona vs Viktoria will be played at the Spotify Camp Nou Stadium located in Barcelona, Spain. The stadium has capacity for 55,865 people.

My name is Lore Solórzano and I’ll be your host for this game. We will provide you with pre-game analysis, score updates, and news as it happens live here on VAVEL.