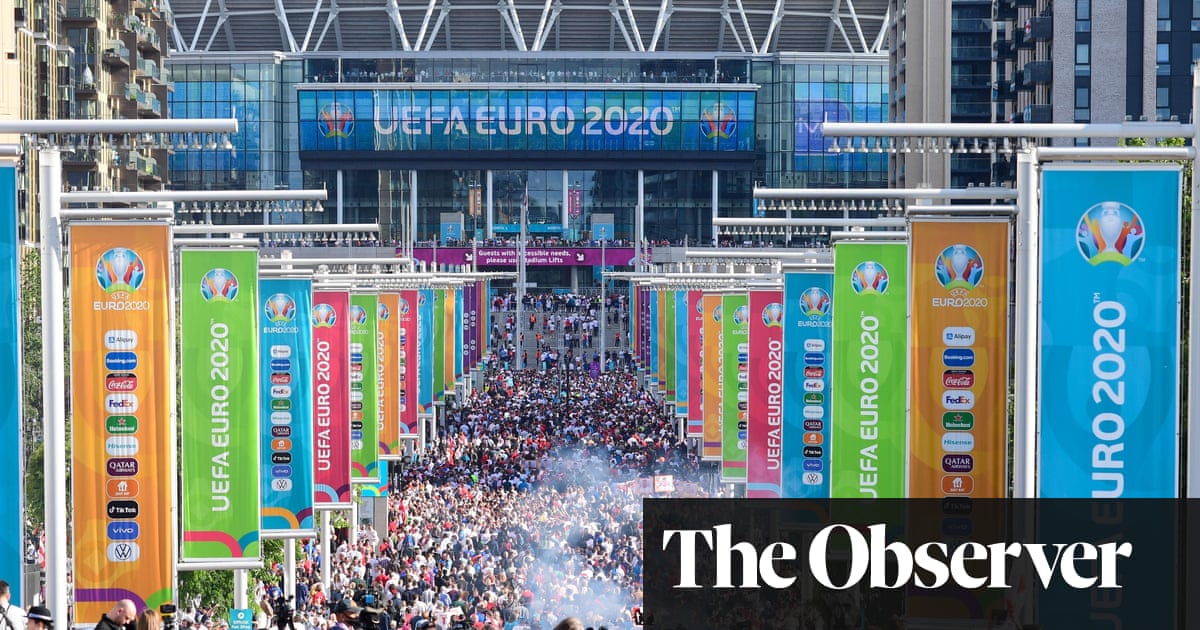 More Denmark fans have come forward to say they were verbally abused by England supporters at Wembley during Wednesday’s Euro 2020 semi-final, with one parent describing how her nine-year-old son was “booed in the face” and that she and her husband were shouted at after the game.

Imaan Madsen, a Danish citizen living in the UK, told the Observer that the family of three had not experienced any problems during the game but as they left the stadium England fans shouted “fuck Denmark” and other slurs at them.

“Our nine-year-old son was booed directly into his face by one fan,” she said. “He had the Danish flag painted on his face and wore a Viking hat and a Denmark kit. We had to wipe the colour off his face and cover up his clothes to stop the abuse. I am absolutely gutted with the behaviour of some English fans, especially towards a child.”

On Friday Jeanette Jørgensen told the Guardian that people had shouted “you don’t belong here” and tried to take her Danish flag. “We had a Danish flag and they were trying to take it away from me,” she said “but I pulled it back and said: ‘Just leave it.’ Then they started pulling my hair as well and I couldn’t believe what was happening. It was quite frightening.”

Allan Nielsen told the Observer on Saturday that he saw Denmark fans being spat at and nearby police doing nothing about it. “Overall the whole experience was very frightening and we felt like we were walking in a war zone and that it was just a matter of time before someone would come at us,” he said. “We saw English fans spitting at kids.”

He said he was surprised at the lax security at the game. “When we entered the stadium security didn’t check the Covid app for test results. They hardly checked our bags either. I just told them what I had in my belt bag and that was fine – no wonder they could bring fireworks and laser pointers.”

Other fans who contacted the Observer and the Guardian were also upset with the security inside the stadium and the fact that England supporters managed to sit in the Denmark sections. Birgitte Surtees went to the game with her English husband and their Danish-English son.

“Going through security at the stadium was very easy and my bag was not checked,” she said. “Also we had been told beforehand to bring our passports in order to match our tickets to our documents but nothing was checked.

“Inside the stadium we took our seats and waited. Suddenly the seats around us started filling up with English supporters. I heard them shout to others that there were empty seats here and suddenly we had about 30 [England] supporters sitting around us. There was no security around and after being shouted at we managed to move a few seats away from the ones we felt were the most aggressive.”

Surtees says one fan shouted in her ear how “shit Denmark was, how shit I was and that I was a whore”. She says her main complaint is that it felt as if there was no crowd control, no seat checking and that there were not enough police or security personnel at the stadium. She and other fans are in the process of making a complaint to Uefa and the Danish football federation.

Søren Moldaschl, who travelled from Scotland for the game, says he was lucky enough to be in a section which had an “amazing” atmosphere for almost all of the game and only a handful of English fans. He says that other Danish sections of the ground “were full of English fans” and that “despite being told to bring photo ID, there was no cross-checking of that with the tickets and seats/sections”.

Uefa said in a statement that it had “not received any complaint to date” but several Denmark fans the Observer spoke to on Saturday said they had sent their observations to the governing body after the game and not heard back.