Jabari Davis @JabariDavisNBA
For the late night crowd, we had a lot of fun on the latest @NBABaseline:
🏀 Cavs 📈all around
🏀 Wild SAS declarations and ridiculous attempts at predicting the future
🏀 Lakers just going to have to get healthy and dig in?
https://t.co/vtauNhXkZE pic.twitter.com/aWGvNmuulH – 11:49 PM 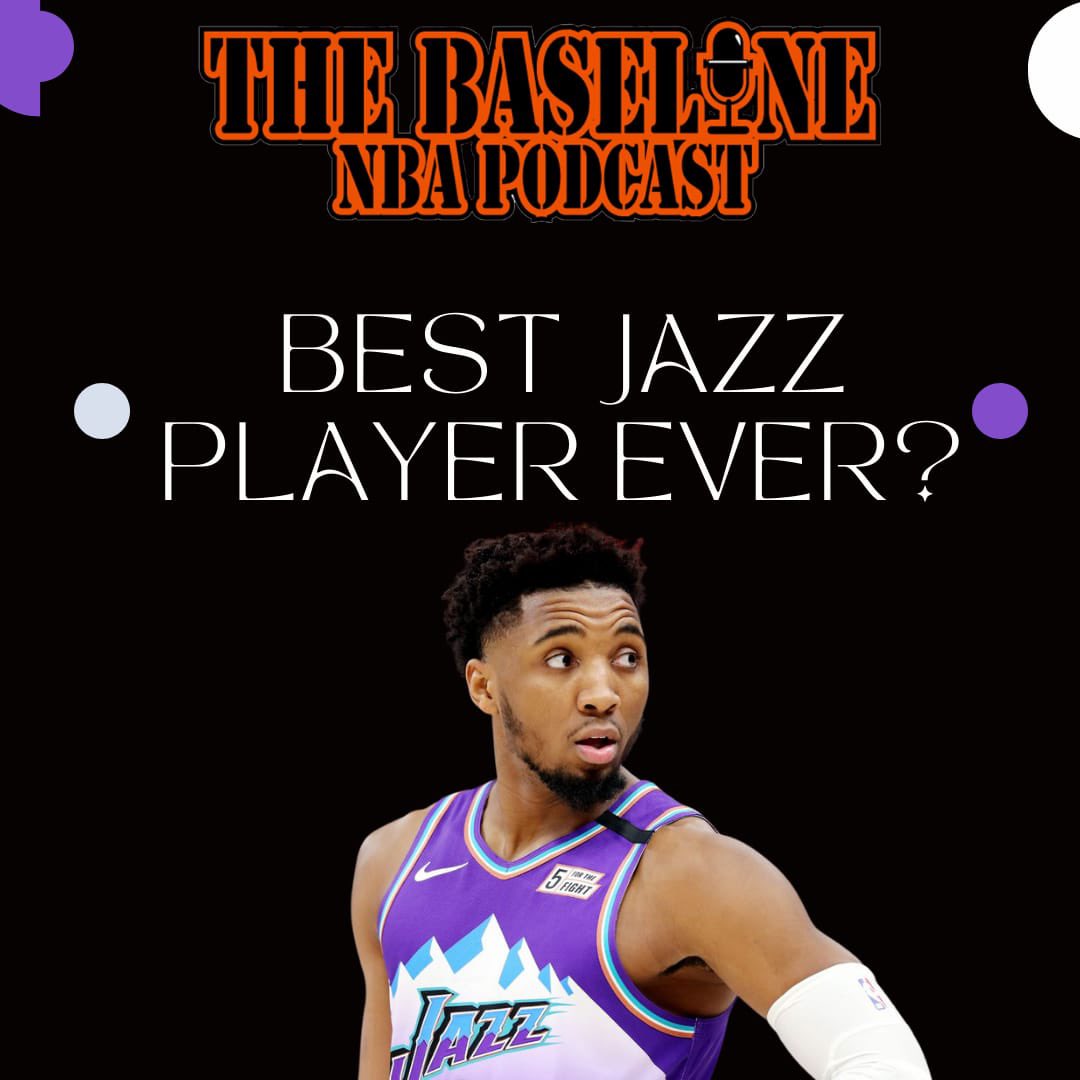 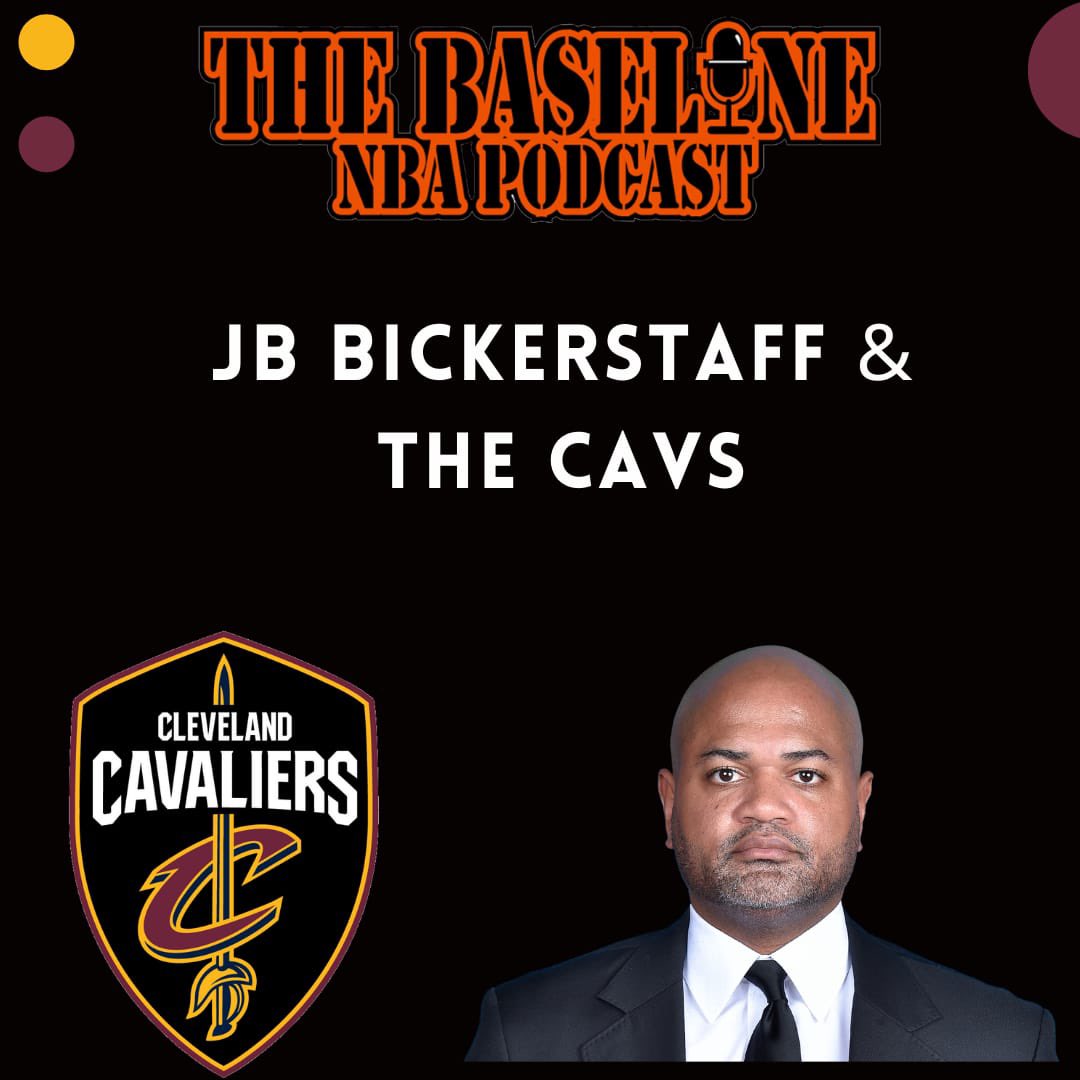 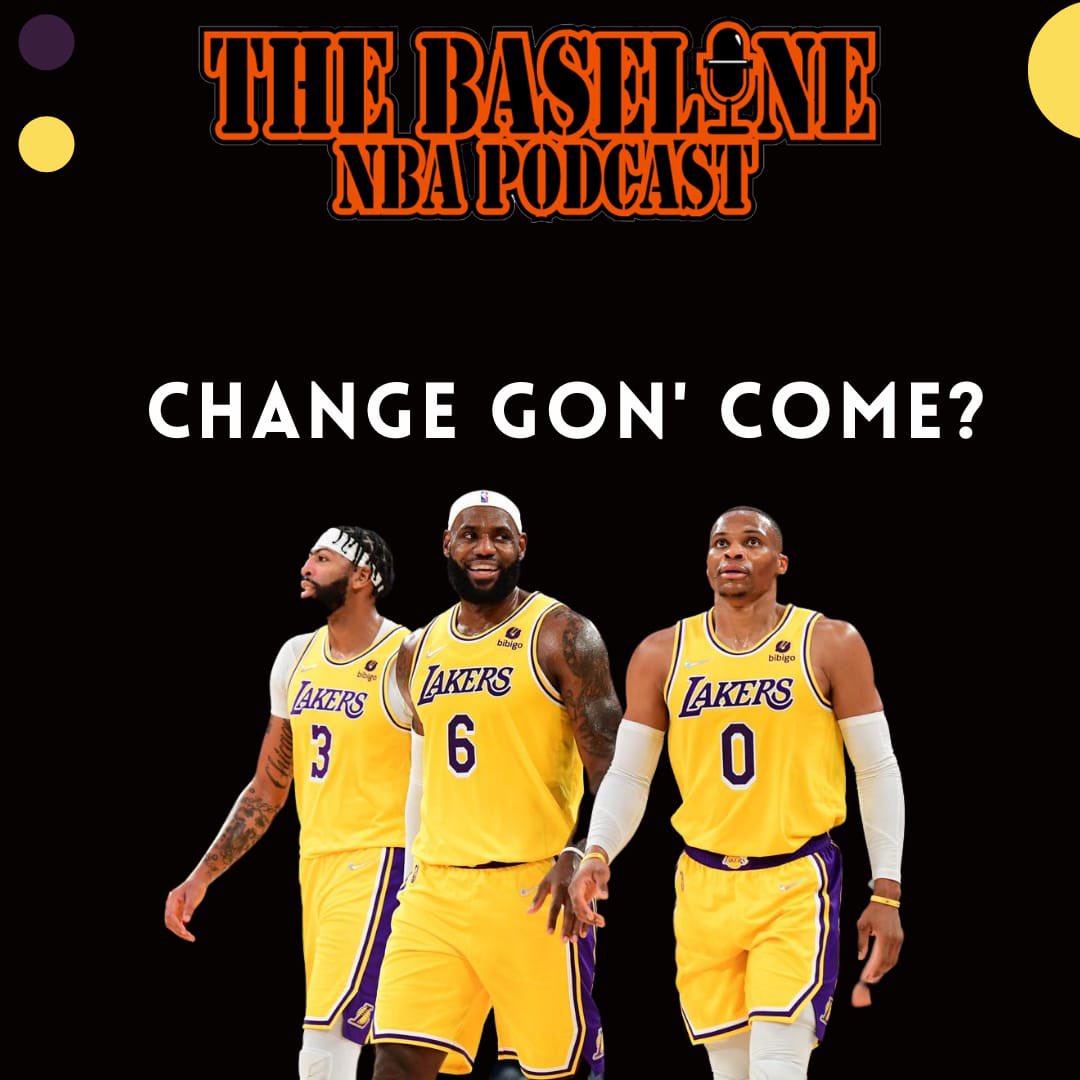 Chris Kirschner @ChrisKirschner
Trae Young on his reaction to seeing the Miami-San Antonio game postponed today while the Hawks continue playing with most of their team out and mostly filled with 10-day hardship exception signings. pic.twitter.com/JW9LHjgbEL – 11:07 PM 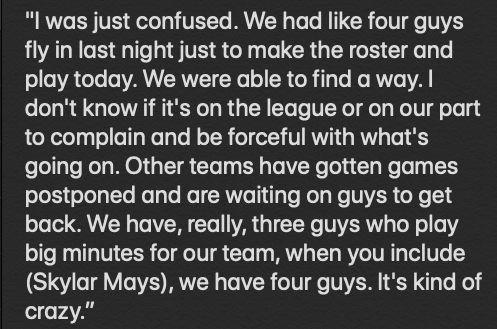 Sam Quinn @SamQuinnCBS
The NBA needs to give Memphis 30 National TV games next year. The league has a responsibility to casual fans across the country to show Ja Morant as much as humanly possibly, because other than heat check Curry, he’s probably the most fun player to watch in the NBA. – 10:41 PM

Anthony Chiang @Anthony_Chiang
Heat is still planning to fly to Houston tonight, as originally scheduled, for Friday’s game vs. Rockets. A recap of an eventful day and what’s ahead for the Heat miamiherald.com/sports/nba/mia… – 7:14 PM

San Antonio Spurs @spurs
No game tonight, so let’s have some fun on here shall we?
Quote tweet or reply with your All-Star vote for our guys and we’ll give out some retweets/follows randomly tonight 💫
REMINDER: each tweet/reply must include ONE player’s #FirstNameLastName or handle AND #NBAAllStar! pic.twitter.com/M9gC67p1O8 – 7:00 PM 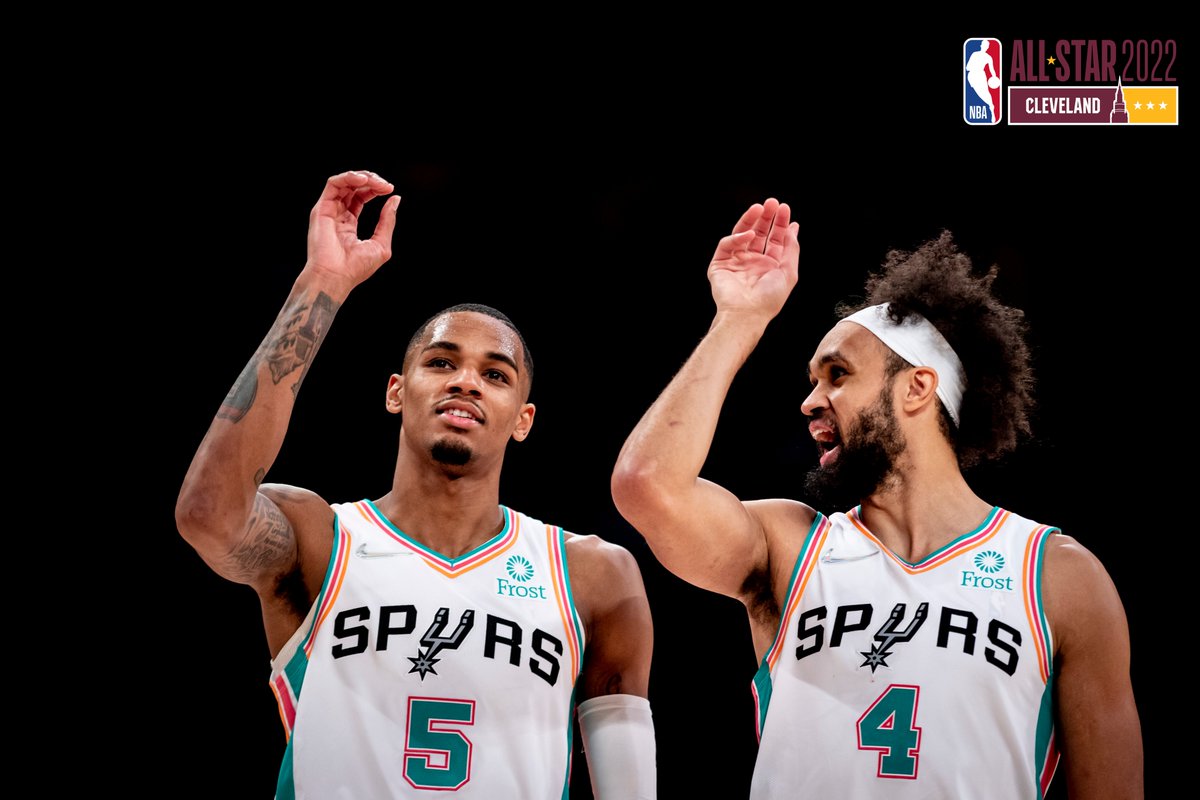 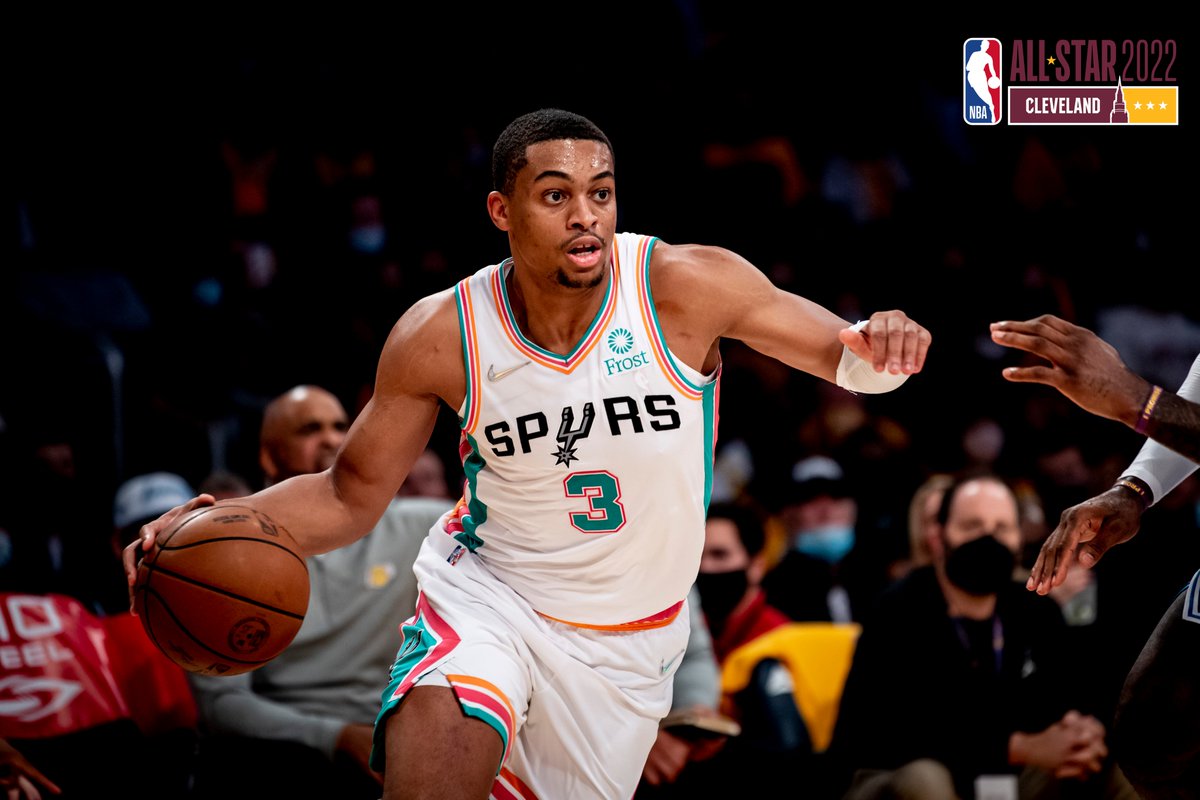 Brady Hawk @BradyHawk305
Tyler Herro is averaging 20.4 points a game this season off the bench, which leads the league
Kelly Oubre is next on that list at 16.2 PPG
The gap between 1st and 2nd is the same as 2nd and 14th
Yeah, the 6th man of the year award is Tyler Herro’s to win, no doubt about that – 6:09 PM

Tom Orsborn @tom_orsborn
Spurs-Heat is the 10th game postponed this season by NBA. None have been rescheduled yet.
SS&E says “tickets and parking will be valid for the rescheduled game, which will be announced at a later date.” – 5:47 PM

Ira Winderman @IraHeatBeat
An update and the details on the three G League players the Heat are bringing in as COVID replacements on emergency 10-day contracts. sun-sentinel.com/sports/miami-h… – 5:26 PM

Anthony Chiang @Anthony_Chiang
Even with COVID-19 replacement players on the way, tonight’s Heat-Spurs game was postponed because the Heat did not have enough available players due to COVID-19 and injury issues.
A recap of an eventful day and what’s ahead for the Heat miamiherald.com/sports/nba/mia… – 5:22 PM

Rod Beard @detnewsRodBeard
#Pistons Dwane Casey said they need to play with more discipline than they did in the San Antonio game. He noted the play where three Spurs got behind the defense for easy baskets. – 5:21 PM

James Edwards III @JLEdwardsIII
Dwane Casey: “We had a day to get somewhat organized.” Said his team can’t wing it despite massive roster change. Thought the team “wing’d” it against the spurs.
“I didn’t see any pull-up 3s against Miami.” – 5:19 PM

San Antonio Spurs @spurs
Tonight’s game between the Spurs and Heat has been postponed. Game tickets and parking will be valid for the rescheduled date to be announced.
More info: https://t.co/vkZ2KqsW4r pic.twitter.com/BXFmN8NmyK – 4:51 PM 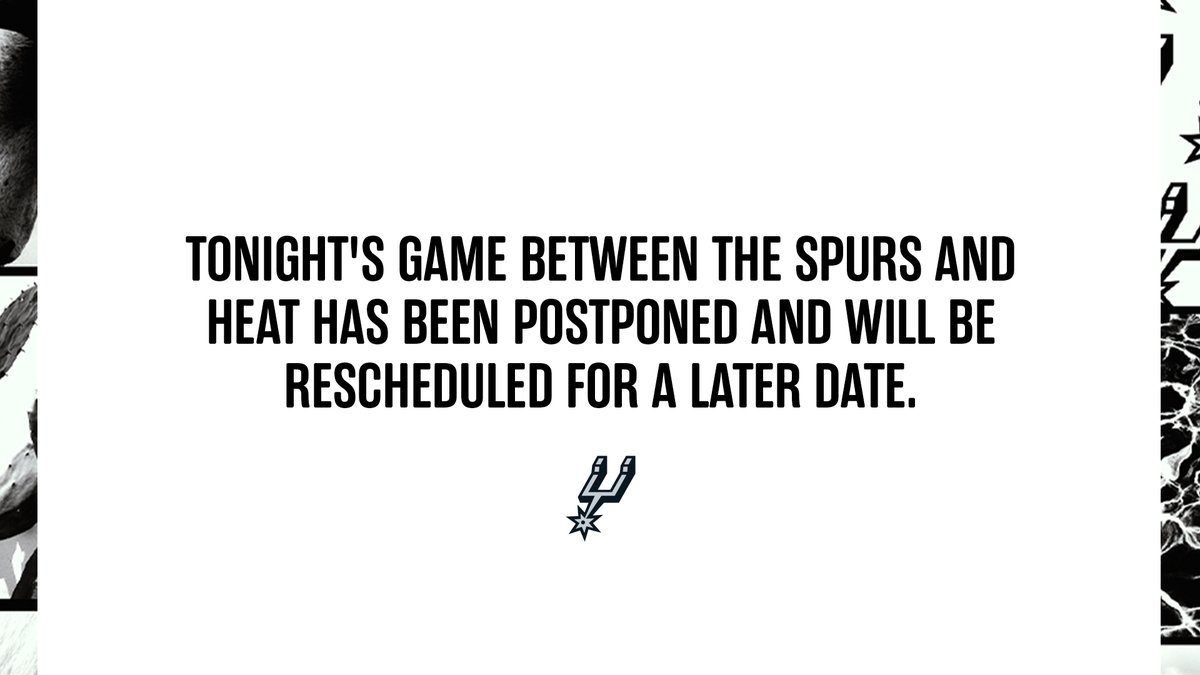 Matthew Tynan @Matthew_Tynan
On the Dejounte Murray front: The only way he’d be available to play against the Grizzlies Friday is if he returns two negatives within a 24-hour period prior to the game. Otherwise he’ll still be in protocols (assuming Sunday is Day Zero). – 4:07 PM

Anthony Chiang @Anthony_Chiang
Heat’s COVID-19 outbreak grows, as Wednesday’s game vs. Spurs postponed. The details on what led to this and what’s next for the Heat miamiherald.com/sports/nba/mia… – 4:07 PM

Detroit Pistons PR @Pistons_PR
The Detroit #Pistons announced today that the club has signed Micah Potter to a 10-day contract using the COVID-related hardship allowance.
Potter, 6-10, 248, has appeared in 11 games (all starts) this season with the @SFSkyforce, the Miami HEAT NBA G League affiliate. – 4:07 PM

Anthony Chiang @Anthony_Chiang
Heat is scheduled to fly to Houston tonight, but still unclear if those plans remain with everything going on. Game vs. Rockets is Friday, so the team could technically just leave tomorrow. – 4:01 PM

Tom Orsborn @tom_orsborn
On positive note for Spurs, it’s more rest for them before long road trip and gives Lonnie chance to heal without possibly missing a game. He was doubtful for tonight with a bruised knee. – 3:56 PM

Ira Winderman @IraHeatBeat
Apparently the final straw that forced the Heat’s postponement is that the players they tried to bring in could not be cleared from protocols. – 3:56 PM

Anthony Chiang @Anthony_Chiang
Heat will likely have enough to play Friday vs. Rockets, as of now. Lowry may be cleared by then since his six-day quarantine runs through Thursday, and Butler’s injury not expected to be long-term issue.
Also, this morning’s round of testing did not result in any new positives. – 3:55 PM

Mike Vorkunov @MikeVorkunov
There were 9 NBA games schedule tonight. Spurs-Heat is postponed. 75 players listed between those teams in health and safety protocol — as of 3:30 injury report.
Hawks have 13 players out with COVID-19
Pistons have 8
Blazers have 7
Celtics, Heat have 6
Bulls, Mavs, OKC have 5 – 3:52 PM

Ira Winderman @IraHeatBeat
Unless NBA schedules three games in three nights, Heat-Spurs cannot be made up during this seven-game Heat trip, unless other games are also moved. – 3:48 PM

Ira Winderman @IraHeatBeat
The Heat’s latest round of testing today, with the results just out, showed no additional positive tests. So for now, player protocols limited to: Lowry, Strus, Haslem, Vincent, Tucker and Cheatham. – 3:40 PM

Kevin Chouinard @KLChouinard
Miami, isn’t there anyone you can sign? pic.twitter.com/dhlxXDHoJp – 3:37 PM 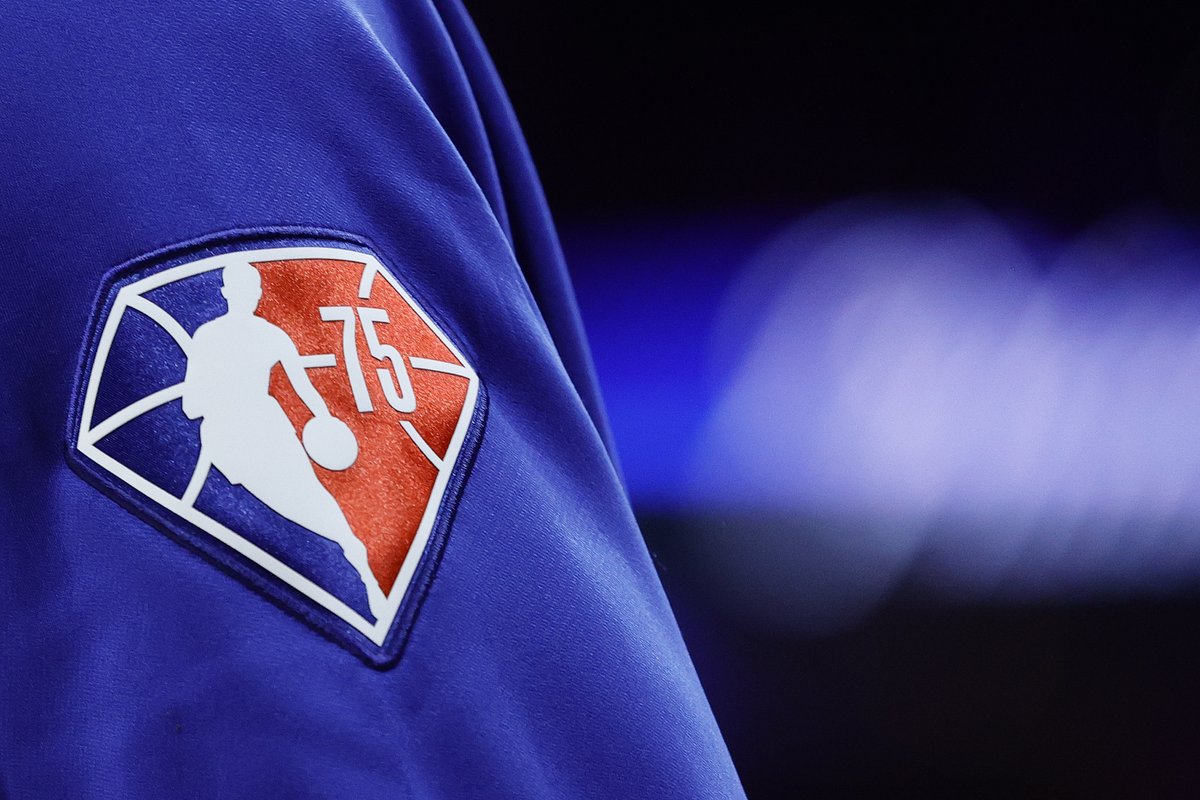 Tom Orsborn @tom_orsborn
The NBA has announced the postponement of tonight’s game between the Spurs and Miami due to the Heat not having the required 8 players needed to play. – 3:29 PM

RJ Marquez @KSATRJ
JUST IN: Tonight’s Spurs-Heat game has been postponed due to Miami not having enough available players to proceed. #KSATsports #GoSpursGo pic.twitter.com/LFpOphceEH – 3:29 PM 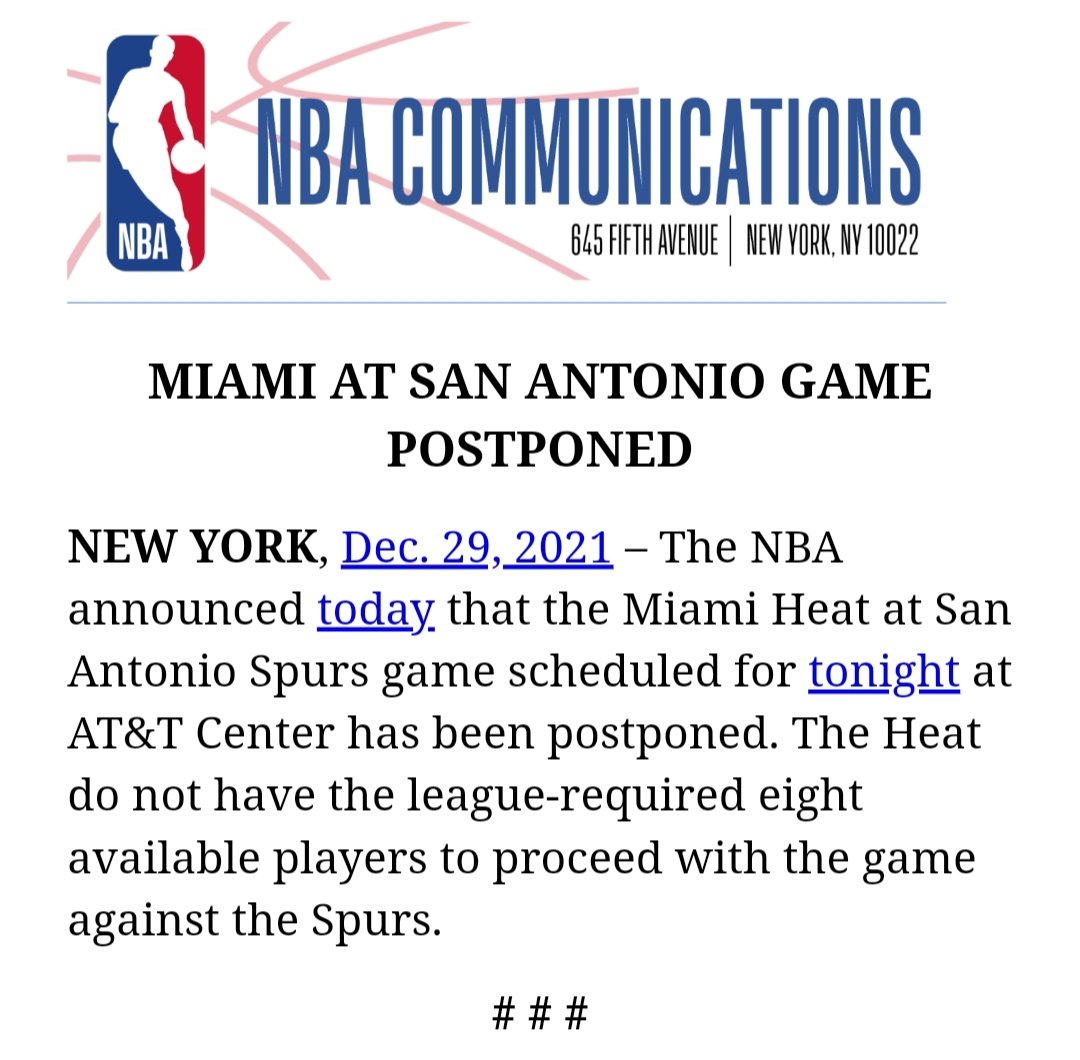 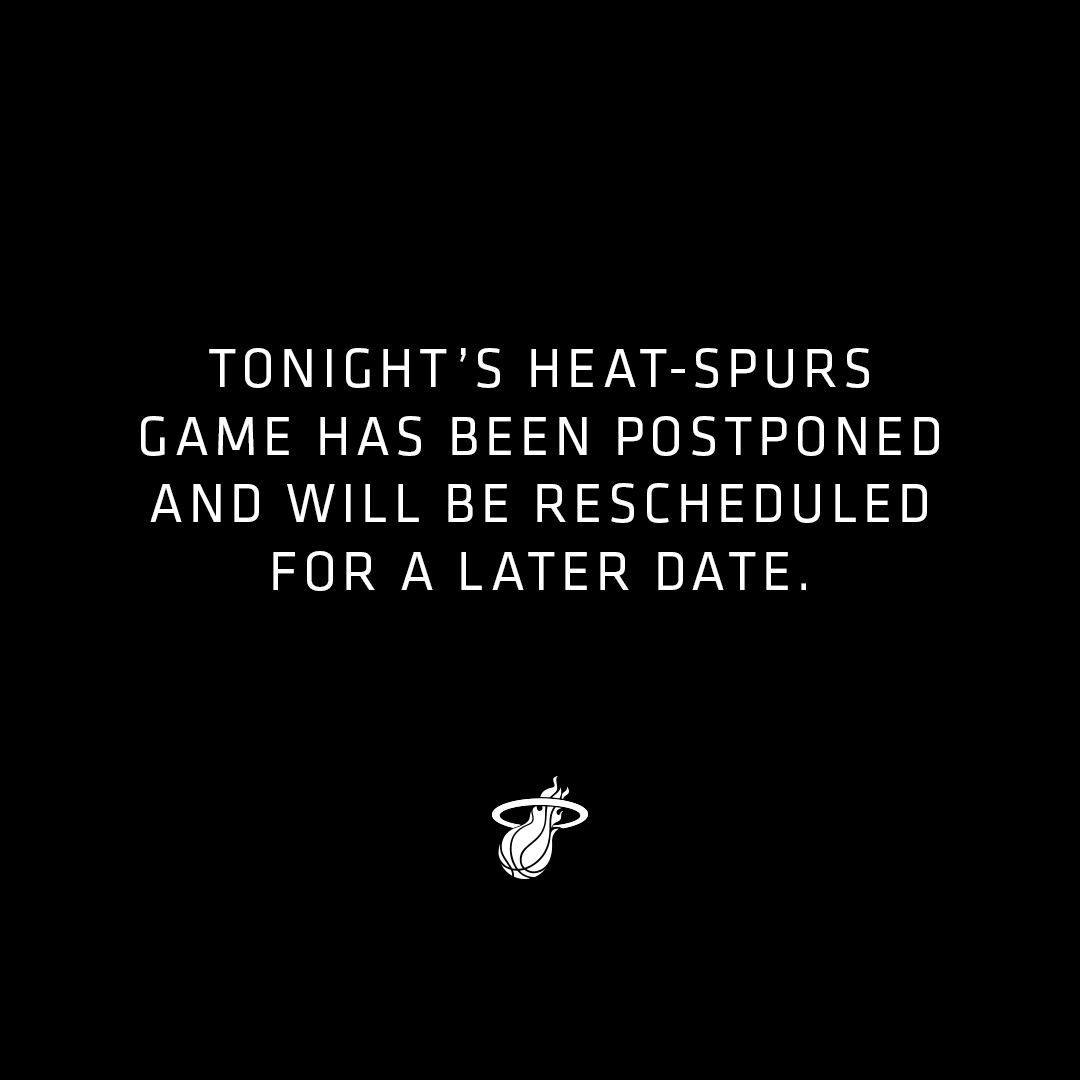 Marc Stein @TheSteinLine
The NBA has postponed its 10th game of the 2021-22 season, calling off Miami at San Antonio. There were 31 postponements last season. pic.twitter.com/YRFQRalIrM – 3:26 PM 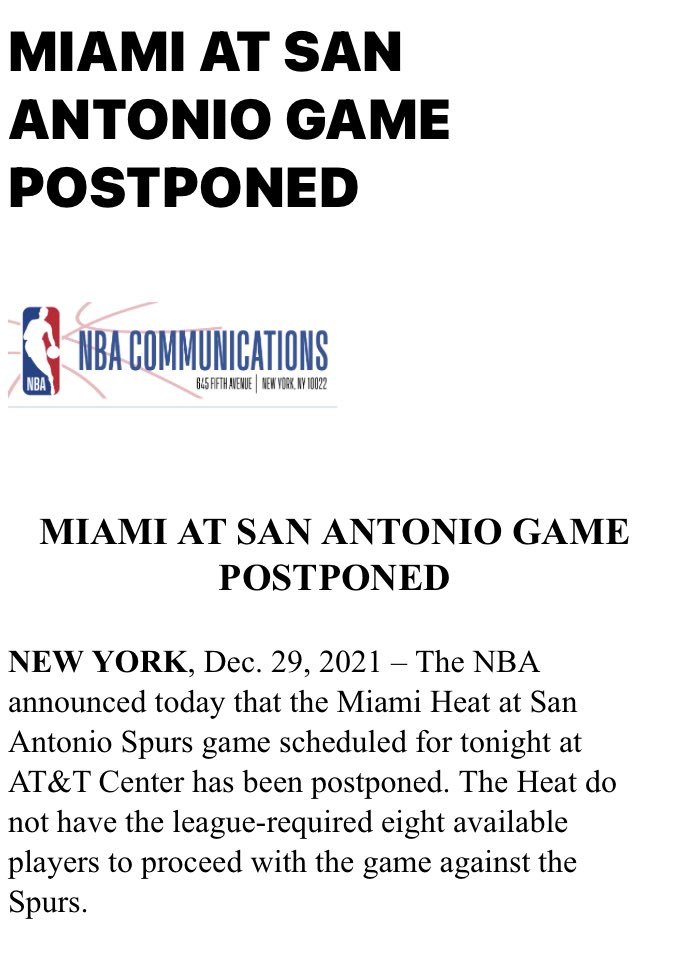 Barry Jackson @flasportsbuzz
Tannehill, to Nashville media today in advance of first game against Dolphins: “I’m thankful for my time in Miami. Grew a lot as person and player.. .As far as people, not a whole lot of players left. There’s been a whole lot of turnover there… I have no ill fillings.” – 2:47 PM