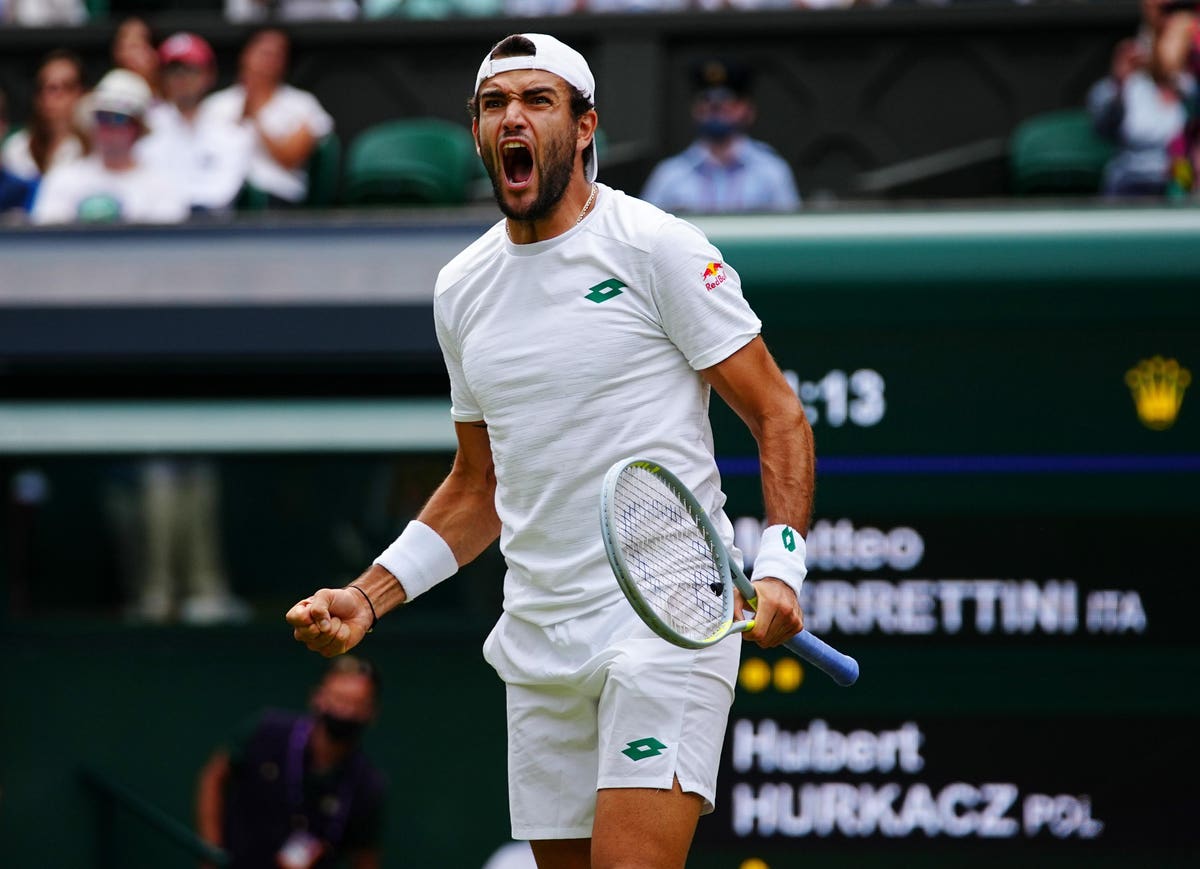 Italy could win not one, but two major championships on Sunday.

On the same day that Italy will meet England in the Euro Cup final at Wembley Stadium, Matteo Berrettini will play for the Wimbledon championship.

The 25-year-old native of Rome became the first Italian man to reach the Wimbledon final when he knocked off Hubert Hurkacz of Poland, 6-3, 6-0, 6-7(3), 6-4 in the semifinals on Friday. Berrettini improved to 11-0 on grass this season.

“I have no words, really,” Berrettini said on court. “Just thanks and I need a couple hours to understand what happened. I just know that I played a great match. I’m really happy, I’m really happy to be here. I enjoy the crowd. My family is here and my whole team. I think I never dreamed about this because it was too much. I’m just so happy.”

No. 7 Berrettini will play for his first major title against the winner of the second semifinal between world No. 1 Novak Djokovic of Serbia and No. 10 seed Denis Shapovalov of Canada. Berrettini is 0-2 against both players.

The winner will take home $2.4 million and the runner-up $1.3 million.

“He’s got a bit of a puncher’s chance, but [it’s] so difficult against Novak,” ESPN’s Darren Cahill said on air of Berrettini.

Djokovic is attempting to win his 20th major title, tying rivals Roger Federer, whom Hurkacz defeated in the quarterfinals, and Rafael Nadal, who opted out of Wimbledon this year to rest.

Hurkacz appeared to have a bit of a hangover early on after defeating Federer in straight sets Wednesday. Berrettini raced out to a two-sets-to-love lead, rolling through the second set.

But in the third set, Hurkacz moved better and played with more confidence, ultimately winning in a breaker.

Berrettini closed the match out with a service winner in the fourth set. He banged out 22 aces, including one at 137 mph, against one double fault in the match, and converted 6-of-10 break chances. His serve has reached 139 mph during the fortnight.

The Italian credited his 2019 semifinal loss to Federer at Wimbledon with preparing him for the next opportunity to reach the final. Federer thrashed the Italian 6-1, 6-2, 6-2 in that match before losing to Djokovic in the final despite holding two match points.

“[Federer’s] just a great legend, and I enjoyed it even if I lost,” Berrettini said. “I think that experience helped me a lot to be ready for today.”

Now he will play in his first Grand Slam final on the same day his nation’s soccer team meets host England for the Euro title.

“So far it’s the best day tennis-wise of my life, hopefully Sunday’s going to be even better,” Berrettini said. “But I’m so proud to bring the flag here.”