‘It’s not about marketing, they are there on ability’ – Friedel hails USMNT stars Pulisic, McKennie and more – Goal.com

The United States men’s national team is experiencing an explosion in talent with many of the squad now featuring for European clubs at the highest level, including Chrstian Pulisic, the newly-crowned Champions League winner with Chelsea.

Pulisic leads a new USMNT generation which tasted success for the first time on Sunday, defeating rivals Mexico for the inaugural CONCACAF Nations League title, with the Chelsea man netting the crucial penalty in extra-time which sealed the win.

While Pulisic, who captained the team which beat Mexico this past week, is starring for Chelsea, the USMNT can also boast of having Sergino Dest at Barcelona, Weston McKennie at Juventus, Zack Steffen at Manchester City, Gio Reyna at Borussia Dortmund, Tim Weah at Lille, Yunus Musah at Valencia and Tyler Adams at RB Leipzig.

Despite the off-field allure of having a marketable U.S athlete in the ranks, this current crop have earned their place at the Champions League’s top sides on merit, according to ex-national team goalkeeper Brad Friedel.

“The U.S. players that are at their clubs, including Christian, are in on merit and their ability alone. It’s not about marketing,” Friedel tells Goal. “The marketing is not as big as people think in the United States just yet.

“As the sport grows in the U.S., there will be opportunities, but today, he’s in on his ability alone. Christian is arguably our best player, [he] definitely is on the attacking front and at one of the biggest clubs in the world.

“It is fantastic for U.S. Soccer [to have him], he’s an outstanding player. You never know what happens with the futures of careers and what happens when head coaches change, someone gets fired and hired, but if he just keeps his head down and works hard, then I don’t see too many coaches not being impressed by him.”

This U.S generation is coming off the back of the unimaginable disappointment of missing out on the 2018 World Cup in Russia. 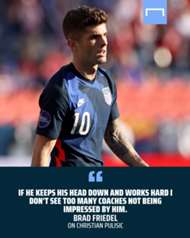 But under Greg Berhalter, the UMSNT has risen again, claiming its first major silverware since the 2017 CONCACAF Gold Cup, and establishing itself as one of the most exciting young teams in international soccer ahead of Qatar’s 2022 World Cup and the 2026 edition on home soil.

With its core all featuring at the highest level, Friedel sees the opportunity for genuine progress in the World Cups next winter and further afield.

“I don’t know if it will be this upcoming World Cup or the next one but this team will be the closest since 2002, if not better it,” says Friedel. “We had Claudio Reyna at the top of his game and John O’Brien starting for Ajax at the time in the middle. We had Brian McBride, myself and Eddie Pope.

“Almost all of our players had big roles at European clubs. That’s what’s happening again. I fully anticipate that we will qualify for the World Cup and once there, there are not too many midfielders better than Weston McKennie and Tyler Adams, that’s providing our backline can stand up to it.

“We have excellent goalkeeping, no matter who ends up No.1 in the games. We have every chance of doing very well in the competition. We have some very exciting young players coming through as well.”

While the failure in Trinidad and Tobago ahead of the 2018 World Cup was a major setback for the senior team, Friedel credits the hard work in the background over the past few years at youth level as the reason why so many U.S. talents are now making the breakthrough. 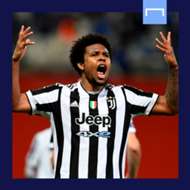 “I was the Under-19s head coach, Omid Namazi was the U18s, John Hackworth U17s. They were all excellent coaches and we had 300 scouts or so all over the country. The U.S. Soccer Federation has since pulled back a lot of that for various reasons but you have to give Tab Ramos an enormous amount of credit, we didn’t miss many players.

“We got to see them all, all the age groups were covered and we exposed the kids to a lot of top-quality competition globally. It gave an incredible amount of competition for the U17 World Cup side and U20 World Cup side which, in turn, also allowed our players to be seen by a lot of scouts globally.

“The players are getting some really incredible exposure; these players, individually, playing with and against the best players on the planet. So things are looking really good for U.S. Soccer.”

Having recently coached the USMNT U19s and subsequently the New England Revolution, Friedel now works as an agent with Promoesport and has recently completed a deal to renew Carles Gil’s contract at the Revs.

“It has been fascinating because, in the U.S., I have worked in the media, coach in the national team and MLS, knowing the youth system, I thought I knew everyone. But being an agent, you go into the business world as well which has been very good, educational and eye-opening at the same time,” he said.

“I know the MLS and USL players inside out along with the young ones coming through. That gives me a birdseye view on what players are worth when we go into doing the contract negotiations which has helped.

“I feel like I can help players, especially on the mental side of things. Also with dealing with the head coaches, having been one myself.”