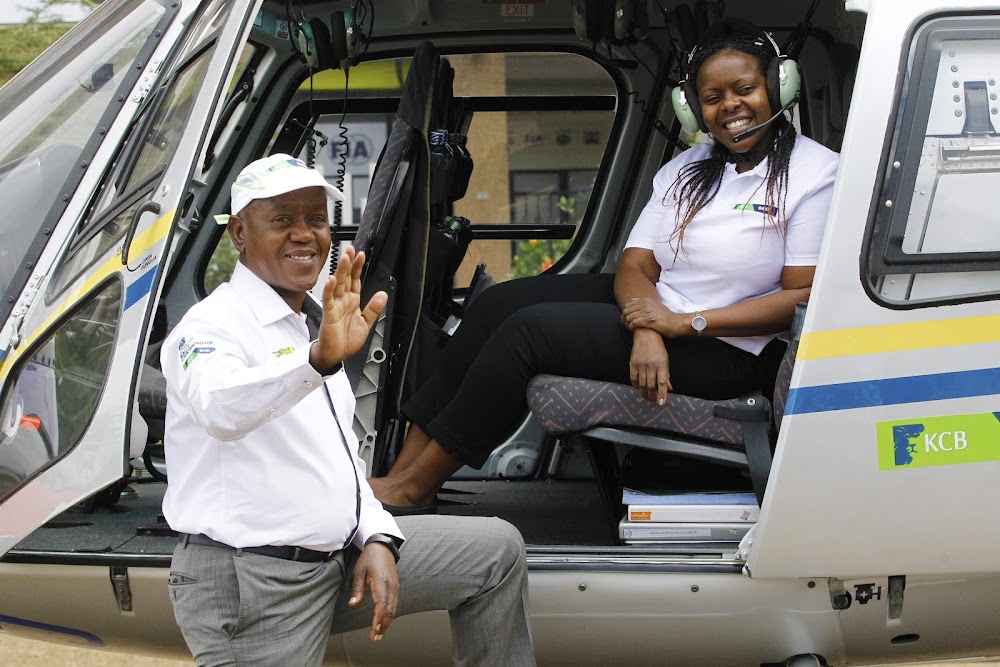 KCB Bank Kenya has unveiled a chopper for the World Rally Championship Safari Rally set for June 24-27 in Naivasha.

The chopper will allow lucky fans a ride during the two-day event in Naivasha and Nakuru spectator stages.

Over 36 lucky fans will get a chance to take the helicopter ride over the Longonot, Soysambu Farm, and Hells gate enabling them to enjoy watching the rally route and cars from the sky.

Speaking during the unveiling ceremony at WRC Safari Rally Centre in Kasarani, KCB Group acting marketing, communication and citizenship director Wanyi Mwaura said the bank is offering rally fans the opportunity to have a joy ride over the track.

“We are looking at giving rally fans a very different viewing experience,” Ms. Mwaura said. “Our fans have stuck with us over the past 19 years when WRC was absent and we want to return the favour by allowing them to experience the thrill of watching the race from the sky.”

The deal cements the bank’s footprint in supporting sports which cuts across various disciplines including motorsports, golf, athletics, chess, rugby, volleyball and football.

“Our sponsorship has sustained motorsports in Kenya over the years and we want to give our pumped-up fans a lively experience,” said Ms. Mwaura.

“You can see the race track a lot better and it looks good from up there rather than looking straight at it.”

The bank is keen on further deepening its contribution towards sports in the East African region, as a way of supporting communities and building a critical mass of sporting talents, which is critically important as the pandemic continues to impact sports activities.

Over the past 18 years, KCB has invested over Sh1.2 billion towards supporting motorsports, largely rallies and autocross circuits, through Kenya Motorsports Federation.

WRC is one of the oldest and leading global motorsport competitions and is governed by FIA. The championship returns to Kenya after a nearly two-decade hiatus. The competition was put off after the Covid-19 pandemic struck.