Kenya’s wait for a 5,000m gold at the Olympics will continue after Uganda’s Joshua Cheptegei won gold for Uganda at the 2020 Olympics in Tokyo on Friday.

Kenya’s lone ranger in the final Nicholas Kimeli could only manage second place as USA’s Paul Chelimo dipped at the line to win bronze.

Help us serve you better by completing our quick survey.

Kimeli who had taken turns with Cheptegei in pacing the race was still happy with the result, but was unhappy with Uganda’s Jacob Kiplimo who seemed to have spiked the Kenyan with one and half laps to go. 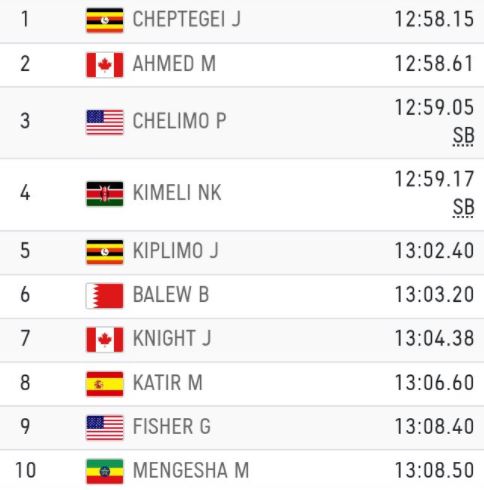 “The race was okay for me although with two laps to go I pulled a muscle and I had to adjust to get to the group that had gone ahead of me.

“At some point Kiplimo (Jacob) from Uganda tripped me and it’s not fair. It derailed me but I’ll come back stronger. This is what God planned. Hopefully, In 2024, in Paris, I will bring gold to Kenya because I felt I wasn’t far from it today,” Kimeli said.

The last time Kenya won the Olympic gold in 5,000m was in 1988 when John Ngugi broke off from the rest of the field in the early stages of the rest and nobody got up with him.

At the Tokyo Olympics though, at least there was a Kenyan athlete in Kimeli in the final as compared to the last Olympics in Rio in 2016 where no Kenyan made it to the final.

Daniel Simiu was eliminated in the heats while Samwel Chebole did not take the track in the heats after getting injured hours to the race.

For Uganda’s Cheptegei it was sweet to have finally won gold in Tokyo after missing out in the 10,000m final on the first day of the track and field programme last Friday.