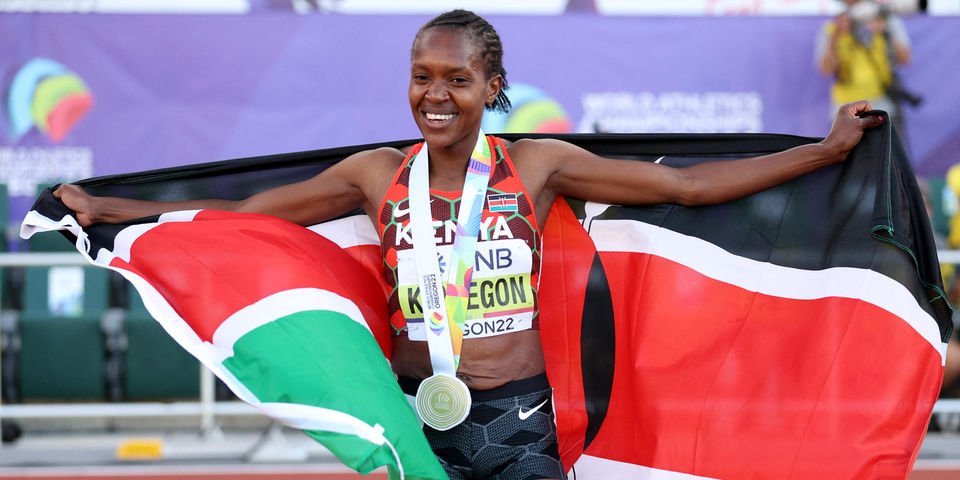 Two-time world 1,500m champion Faith Kipyegon is happy to end her season on a high despite recording a slower time in Zurich Diamond League.

She said the victory came as a surprise because she expected the opponents to give her a run for her money.

“This was a really strong field, but then I kept thinking this was the last race of the season, and I took the opportunity to end it in a nice way. The win feels really special,” Kipyegon said.

She added: “I was hoping they (competitors) would come with me when I pushed and it would be a tough race. I enjoyed it anyway, but it was really funny because I honestly believed they were coming with me so it almost felt that I was running on my own towards the end.”

Kipyegon admitted to having had a long and busy season. At the World Championships in Oregon, she reclaimed the world title she had lost to Netherland’s Sifan Hassan in the 2019 edition.

She was also in action in Monaco, where she ran her personal best time of 3:50.37 (national record). Kipyegon added that racing in Zurich will always be special for her.

“It has been a long season, and, indeed, my legs are tired, but I think I still managed to run a good time. It is really special to race here in  Zurich, and you can really hear it out here,” she said.

Meanwhile, world 800m champion Emmanuel Korir also said his win was unexpected, owing to the competition in the race. He said he had invested a lot of time in training and it paid off well.

Korir obliterated a strong field to win the race in a world-leading time of 1:43.26. Canada’s Marco Arop and Great Britain’s Jake Wightman placed second and third in 1:43.38 and 1:44.10 respectively.

“The last few metres were very tough. I never expected it to be this tough, but I did it. It is not about luck but a result of hard work,” Korir said.

He added: “I had to push it hoping I could finish second or third. I managed to come first in the end though. You know, I was a bit behind today, but I did not give up. I will always do my best, and now I have the Diamond League trophy.”

You may also like
‘There’s never been more buzz around one man passing a drink to another’ – The Indian Express
After his world record-shattering marathon run in Berlin
7 United players who could make their maiden appearance vs City for the club – United In Focus – Manchester United FC News
There are as many as seven Manchester United players
Mikel Arteta issues Antonio Conte response ahead of North London Derby amid Tottenham assessment – Football.London
Arsenal boss Mikel Arteta has issued a response to
What happened in Arsenal training as Mikel Arteta continues mind games with Antonio Conte – Football.London
Arsenal’s preparations for the North London Derby
Your Friday Kickoff: What surprises will Week 33 create for Decision Day? | MLSSoccer.com – MLSsoccer.com
FINALLY. The September international break is over
Supercomputer predicts Arsenal Vs Tottenham outcome ahead of huge North London Derby clash – Football.London
A supercomputer has predicted that Arsenal will just
‘I’m still the best,’ insists Kenenisa Bekele before London Marathon tilt – The Guardian
Kenenisa Bekele insists he still deserves to be considered
The three Tottenham players Antonio Conte could be without against Arsenal in North London Derby – Football.London
Arsenal host Tottenham this weekend in a huge new installment
Go to mobile version