Giorgio Chiellini and Leonardo Bonucci comprise one of the most fearsome centre-back pairings in world football but it is England, not Italy, who boast the best defensive record at Euro 2020 ahead of Sunday’s final. Gareth Southgate has found a winning formula.

Mikkel Damsgaard’s stunning free-kick ended their record-equalling run of clean sheets at the tournament but England have not been beaten from open play since March, when Poland’s Jakub Moder fired past Nick Pope during a World Cup qualifier.

Raheem Sterling and Harry Kane have been the standout performers during the run to the final, scoring three and four goals respectively and rightly earning plaudits for their match-winning contributions.

But England’s success at Euro 2020 has been built on solid foundations. Southgate’s side are well organised and difficult to break down. Their backline is formidable but it is also flexible and there is one, often unheralded player who makes the system work.

At Wembley on Wednesday, it took less than 10 minutes of England’s semi-final win over Denmark for Kyle Walker to show why he is uniquely important to Southgate’s defence.

In his first confrontation with Joakim Maehle, Denmark’s most dangerous attacking outlet, he left the wing-back sprawled helplessly on the turf, regaining possession for England and setting the tone for an individual duel he would win emphatically.

Shortly afterwards, he was sprinting back towards his own box to prevent Damsgaard from scoring the opener.

The 21-year-old had burst through a gap in England’s defence, leaving Harry Maguire and John Stones trailing in his wake, but Walker was alive to the danger, his pace enabling him to get back and rescue the situation.

Those two moments – barely a minute apart – summed up why Walker has become a mainstay in this England side.

Walker has had some awkward moments in possession during the tournament, particularly in the opening game against Croatia, when a string of misplaced passes caused England some discomfort. But he has performed his two primary duties impeccably.

The 31-year-old has faced some difficult opponents on England’s right flank, including Croatia’s Ivan Perisic, Germany’s Robin Gosens and of course Denmark’s Maehle.

But it is no coincidence that none of those players was able to create a single scoring chance or even register a shot on target in their games against England.

They couldn’t navigate a route beyond Walker and the statistics prove it. According to Opta, he has not been dribbled past once in 480 minutes of action at this tournament.

Walker is an outstanding one-on-one defender and the blistering recovery run to deny Damsgaard in those early stages against Denmark was not an isolated incident either.

In fact, Walker has been seen snuffing out opposition counter-attacks repeatedly during the tournament, much as he does for Manchester City domestically. His athleticism allows his club to play a high defensive line and it is the same story with England.

He has not generally defended on the front foot during the tournament – his numbers for tackles and interceptions are therefore relatively low – but crucially he is averaging more ball recoveries per 90 minutes than any of England’s other outfield starters.

That statistic highlights Walker’s effectiveness when it comes to reading danger and dealing with it, and just as importantly, he also offers Southgate tactical flexibility.

He can be an effective weapon offensively but he is also comfortable tucking in at centre-back, providing the defensive balance needed to allow Luke Shaw to bomb forward on the opposite flank.

The Manchester United left-back has certainly enjoyed that attacking freedom, providing three assists at the tournament and drawing comparisons with Brazil’s Roberto Carlos. But it is Walker on the right who has given him the platform to impress.

Walker’s versatility also enables Southgate to change his system, both between games – as he did for the last-16 triumph over Germany, when the back four became a three – and during them – as he did when Kieran Trippier was brought on for Jack Grealish to see out the closing stages against Denmark. 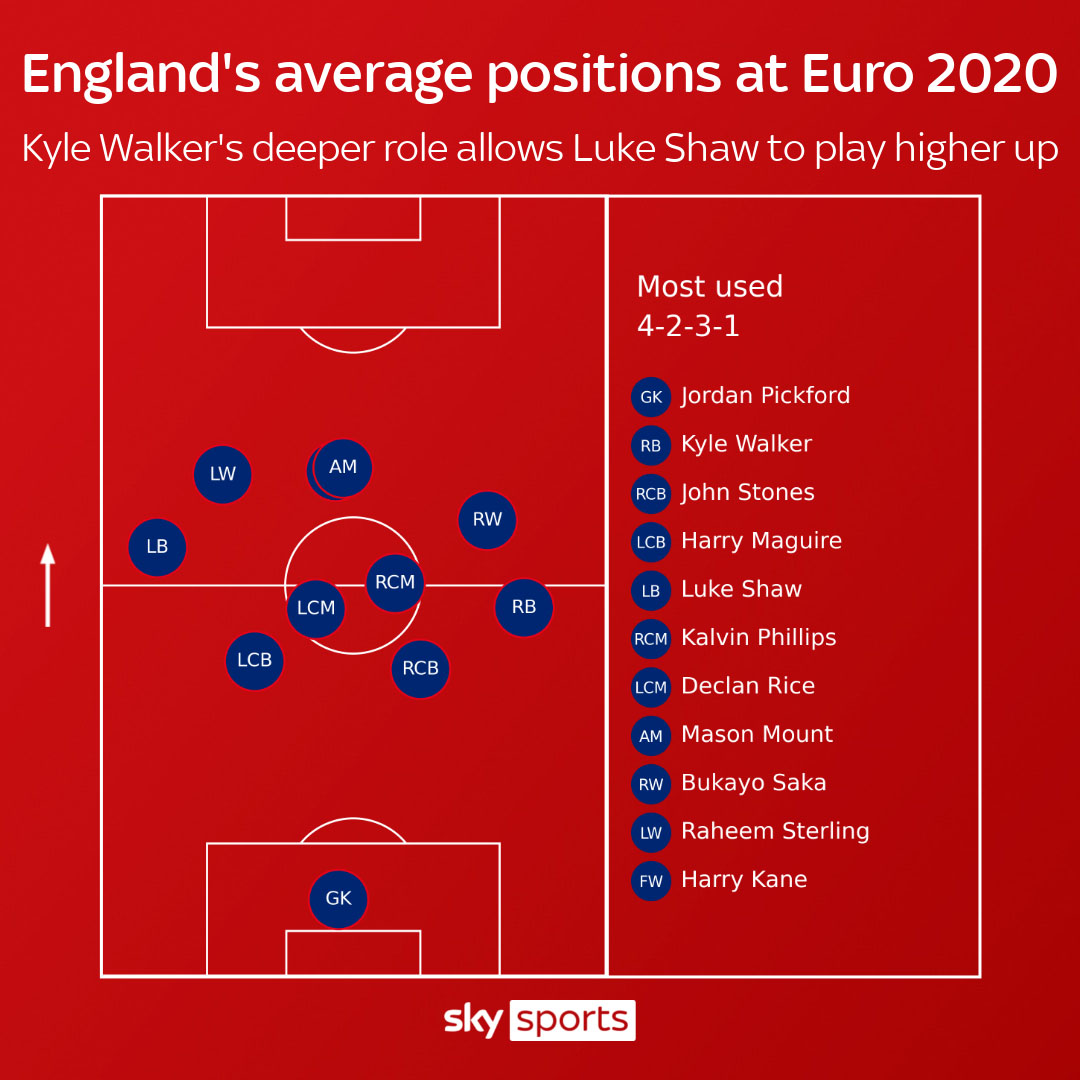 Walker is not viewed as one of Southgate’s “tribal elders”. Those roles belong to Kane, Sterling, Harry Maguire and Jordan Henderson. But he is in fact the most senior player in the squad having turned 31 in May and his experience is undoubtedly valuable.

Bukayo Saka would certainly testify to that.

The Arsenal youngster received a constant stream of on-field instructions from Walker when playing in front of him against Denmark and the Manchester City defender’s guidance is sure to be just as important for whomever lines up there against Italy.

For Walker, Sunday’s final is territory that looked beyond him only last year, when he was found to have breached Covid guidelines, reportedly angering Southgate, having already lost his place in the England manager’s squad.

He returned to the fold last September, making his first England appearance in over a year against Iceland in the Nations League, but a red card in Reykjavik left him fearing his 49th cap may prove to be his last. “Hopefully I will be back,” he told Sky Sports after that game. He did not sound like he believed it.

It is to his immense credit that he was able to work his way back into contention and he now heads into England’s first final in 55 years as an undisputed starter in a side which stands on the brink of glory.

He faces another stern test up against Lorenzo Insigne, one of the tournament’s outstanding performers on Italy’s left flank, but perhaps it is him who should be worried. As Perisic, Gosens and Maehle have already found out, Walker takes some beating.

The Euro 2020 Final preview: Will England or Italy lift the trophy? | Selection dilemmas, tactical analysis, key players, and the view from Italy

England are preparing for their first ever Euros final – but can they beat Italy to lift the trophy? Jasper Taylor is joined by Kaveh Solhekol, Peter Smith and Oliver Yew to discuss what Gareth Southgate’s side will have to do to make sure they come out on top in Sunday’s showdown.

Sky Italia reporter Valentina Fass is also on the show to give us an insight into the Italian camp, the team’s renaissance under Robert Mancini, and what Italian supporters think of this England side.

Plus we hear from Gary Neville on the incredible atmosphere at Wembley and how that affects players, and Jamie Redknapp on why stopping Jorginho could be the key to England’s hopes.