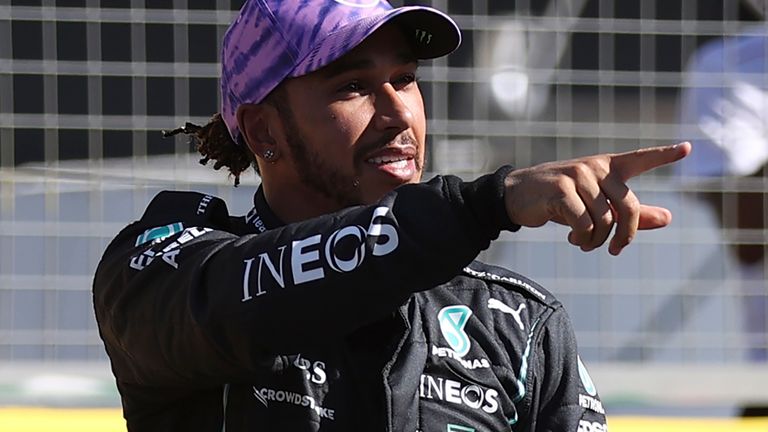 Formula 1 teams and governing bodies have united to show their support for Lewis Hamilton after the online racist abuse the Mercedes driver received in the wake of the British GP.

Red Bull, whose driver Max Verstappen crashed out of Sunday’s race after a lap-one collision with Hamilton, said they were “disgusted and saddened” by the subsequent abuse aimed at the seven-time world champion.

Racist messages including ‘monkey emojis’ and other racial slurs were sent as replies to a post by the Mercedes team on Instagram celebrating Hamilton’s Silverstone success.

Hamilton won his home Silverstone race for a record-extending eighth time despite collecting a 10-second penalty for the lap-one collision with Verstappen, his title rival.

Max Verstappen hit the barriers after colliding with Lewis Hamilton during the first lap of the British GP, resulting in a red flag.

A joint statement issued by F1, the FIA and Mercedes on Monday morning said Hamilton had been “subjected to multiple instances of racist abuse on social media” both during and after Sunday’s race.

Strongly condemning the abuse, the statement added: “There is never any excuse for it, there is certainly no place for it in our sport and those responsible should be held accountable.”

A number of other teams have publicly shown their own support for Hamilton too.

Issuing their own strong statement against the abuse, championship rivals Red Bull said: “While we may be fierce rivals on-track, we are all united against racism.

“We condemn racist abuse of any kind towards our team, our competitors and our fans. As a team, we are disgusted and saddened to witness the racist abuse Lewis endured yesterday on social media after the collision with Max.

“There is never any excuse for it, there is certainly no place for it in our sport and those responsible should be held accountable.”

Posting on his Instagram account, Red Bull boss Christian Horner said that “whilst the rivalry is intense on track for the Championship, highly charged emotions should never cross the line into racist abuse”.

“We have a zero-tolerance approach to racist behaviour within our team and I personally feel strongly that those responsible for this sort of abuse should be held to account.

“We will continue to support the FIA and F1 in order to eradicate this from our sport.”

McLaren stands with Formula 1, the FIA, and our fellow teams and drivers in condemning the deplorable racist abuse towards Lewis Hamilton.

Racism must be driven out of our sport, and it’s our shared responsibility to unite and eliminate it.

We are saddened and horrified to see the racist abuse suffered by Lewis Hamilton following the British GP.

There is no place for racism within our society, and we stand shoulder to shoulder with Lewis, Mercedes, and all our colleagues in F1 in our commitment to eradicating it. https://t.co/qNEogxdjak

Facebook – the parent company of Instagram – told Sky Sports News: “The racist abuse directed at Lewis Hamilton during and after the British Grand Prix is unacceptable and we’ve removed a number of comments from Instagram.

“In addition to our work to remove comments and accounts that repeatedly break our rules, there are safety features available, including Comment Filters and Message Controls, which can mean no one has to see this type of abuse.

“No single thing will fix this challenge overnight but we’re committed to the work to keep our community safe from abuse.”