Lewis Hamilton received online racist abuse following dramatic British GP win; Formula 1, the FIA and Mercedes condemned abuse and called for action to be taken against those responsible; seven-time Formula 1 world champion is a high-profile voice in the fight against racism

Lewis Hamilton said “for the first time in this sport I didn’t stand alone” after praising Formula One’s united grid for condemning the online racist abuse he suffered following the British Grand Prix.

Hamilton was targeted after his opening-lap crash with Max Verstappen at Silverstone earlier this month.

F1, its governing body, the FIA, and Hamilton’s Mercedes team moved quickly to issue a joint statement denouncing the abuse.

Hamilton, F1’s sole black driver, was targeted by racists during a pre-season test in Barcelona 13 years ago, but said the sport took no action. 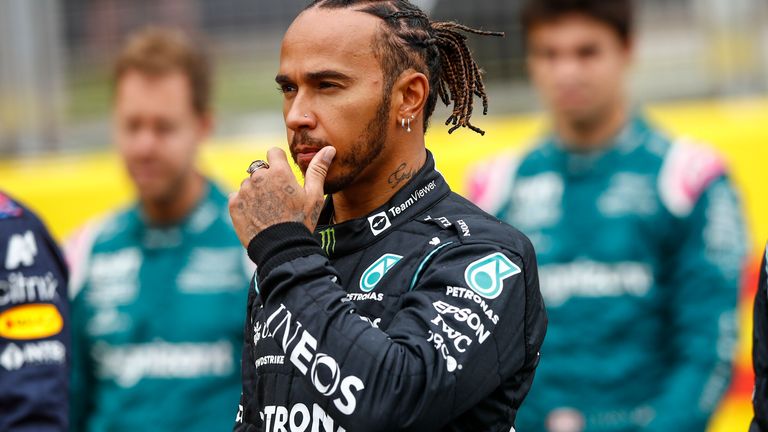 However, speaking ahead of this weekend’s Hungarian GP – the concluding round before the summer break – the 36-year-old said: “It was amazing to see the support from my team, and from some of the drivers.

“I felt for the first time that I didn’t stand alone in the sport. For all the other years I’ve been racing, no one would have ever said anything. When it happened before no one said anything. So it was really amazing to see the steps that have been taken.

“There’s no room for that sort of abuse but if I have to be on the receiving end of that in this industry for people to become aware, then that’s part of my journey.”

Hamilton has been a high-profile voice in the fight against racism and called for tangible action to create a more diverse and inclusive society.

Hamilton: I put no energy into Red Bull challenge Hamilton said he was not concerned by Red Bull’s challenge to his penalty at Silverstone and will not change his driving style as a result of his clash with Verstappen.

“I don’t really put any energy to it,” he told Sky Sports F1. “These past couple of weeks, even the build-up to the British GP, with the release of the Hamilton Commission and Mission 44 charitable foundation – that is where my energy is going.

“I’ve been so grateful to be in this sport for a long, long time and experience lots of different things, but having the chance to change things and have a real impact for the future, that is the most exciting thing for me.

“I love what I do, I just don’t give it any air. I’ve been racing a long time, I’ve face stewards, right and wrong decisions my entire life. There is nothing you can throw at me that I have not faced before – we deal with it.

“I am going to continue to race how I race, continue to fight as I have, it’s got me to this point.”

Sky Sports is committed to making skysports.com and our channels on social media platforms a place for comment and debate that is free of abuse, hate and profanity.

If you see a reply to Sky Sports posts and/or content with an expression of hate on the basis of race, sex, colour, gender, nationality, ethnicity, disability, religion, sexuality, age or class, please copy the URL to the hateful post and screengrab it and email us here.