There were thrills, spills and controversy as 140,000 fans at Silverstone witnessed a British Grand Prix for the ages, won by Mercedes’ driver Lewis Hamilton at his home track. 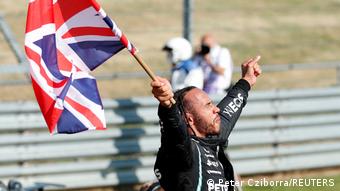 A fierce start to proceedings produced a first-lap incident involving the two when Verstappen spun out into the safety barriers. The 51G crash sent championship leader Verstappen to the hospital for further evaluations, while Hamilton was handed a 10-second penalty that drew boos from the fans in attendance at Silverstone.

Hamilton dropped from second to fifth after serving his penalty in the pits. It gave him 11 laps to chase down the leading Ferrari of Charles Leclerc and the final pass was made with just two laps as he roared back to the delight of the home crowd.

“What a great job guys. Thank you so much for continuing to push this year, I am so inspired by you guys. There’s a long way to go but I believe in you guys,” said Hamilton as he completed a victory lap brandishing the British flag to celebrate cutting the gap to Verstappen in the drivers’ championship from 33 points to seven.

Talking the press after the race, the defending champion refused to be drawn on the first-lap incident. “I always try to be very measured. Max, he’s very aggressive,” Hamilton said after the 99th Grand Prix win of his career. “Today, I was fully alongside him and he didn’t give me the space, so…

“But regardless of whether I agree with the penalty, I take it on the chin and I just kept working. I wasn’t going to let anything get in the way.”

Drive of the day

Hamilton was pushed hard by the opportunistic Charles Leclerc. The Ferrari driver who only has two Grand Prix wins to his name, none this season, nursed minor engine problems whilst holding off the challenge from his Mercedes’ counterpart. He admitted after the race that he could “hear Hamilton’s pace” and a P2 finish marks the end of a positive weekend for the 23-year-old.

Quote of the day

Red Bull boss Christian Horner on the first-lap incident involving Hamilton and Verstappen: “Max has had an accident at 51Gs. [Hamilton] shouldn’t be making manoeuvers like that – it’s unacceptable. The biggest result for us today is Max is uninjured.

“To put a wheel up the inside at a corner like Copse… that, you know, you just don’t do that. He was nowhere near ahead and then there was contact. Lewis has got more than enough experience to know that is unacceptable. I’m just very disappointed that a driver of his calibre should make a move like that. It’s dangerous, it looked desperate.”