Vincent Kipchumba had to settle for silver during the 2021 London Marathon after finishing second behind Sisay Lemma of Ethiopia.

Lemma won the race in 2:04:03, with his fellow countryman Mosinet Geremew finishing third during the Sunday, October 3, race.

The race featured four of the seven men who have run 2:03 or faster in the marathon.

Birhanu Legese was a strong favourite to win goal, all thanks to his personal vest of 2:02:48. 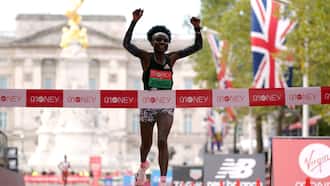 However, strong cases could also be made for Geremew, Evans Chebet, Titus Ekiru and Kipchumba who finished second during the 2020 edition.

While defending champion Shura Kitata was also competing, nothing much could be said about him as he was understood to be nursing an injury.

The injury appeared to take a toll on him midway the race and was forced to drop off the back as Cheney and Lemma led the pack through the 10km-mark.

Kitata was hoping to defend his title from last year when he stunned Kenyan marathon icon Eliud Kipchoge to claim victory.

However, this was not the case in 2021 as he missed out on the medal standings altogether.

TUKO.co.ke reported Brigid Kosgei was aiming for a third consecutive victory in the London Marathon but faced some tough competition to finish fourth. 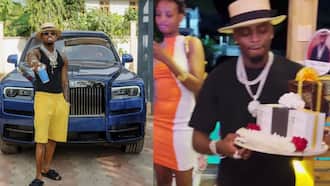 The time posted by Jepkosgei saw her ink her name in history books as she became the seventh-fastest female marathoner in history.