Chelsea will look to maintain their grip on top spot in the Premier League when they host the struggling Norwich City on Saturday.

The Blues have won four of their last five league games to sit one point clear of Liverpool after eight matches.

Thomas Tuchel’s side are coming off a 4-0 thrashing of Malmo in the Champions League and will fancy their chances of putting a few past Norwich, who have the league’s second-worst defence.

The last time these two sides met, in July last year, Chelsea eked out a 1-0 win thanks to Olivier Giroud’s first-half strike.

Chelsea will be without both Timo Werner and Romelu Lukaku, who picked up injuries in the win over Malmo.

Christian Pulisic will also be unavailable as he continues his recovery from injury. Hakim Ziyech, however, is in contention to start after shaking off a shoulder problem.

Edouard Mendy produced one of his greatest ever performances in Chelsea’s 1-0 win at Brentford in their previous game. He followed it up with another clean-sheet against Malmo and will undoubtedly start between the sticks against Norwich.

Thomas Tuchel is likely to stick with the back-three system that has served him well so far this season.

Antonio Rudiger returned to the lineup against Malmo, replacing Malang Sarr. He appears to be free from the back injury that prevented him from featuring against Brentford, and should start at centre back in the Chelsea lineup against Norwich.

Rudiger will likely be joined by the ever-impressive Trevoh Chalobah and Andreas Christensen in the Chelsea defence.

Reece James came off the bench against Malmo, but he could be handed a start at right wing-back in place of Cesar Azpilicueta considering the nature of the opposition.

Ben Chilwell has been in red-hot form for Chelsea in recent games, wrestling the left wing-back position away from Marcos Alonso, who had started the season strongly. Chilwell, who has scored three goals in his last four games for club and country, should get the nod once again.

Ruben Loftus-Cheek turned in a fine performance in the middle of the park for Chelsea against Brentford and he is in contention to start once again. He could replace Jorginho despite the Italian’s two goals against Malmo in midweek. 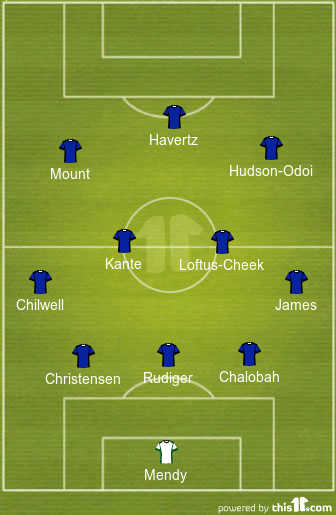 N’Golo Kante will likely partner Loftus-Cheek in the centre of the midfield. The Frenchman played just over an hour against Malmo and should be fresh for this fixture.

With Werner and Pulisic unavailable, Callum Hudson-Odoi could get make the Chelsea lineup. The Englishman has made just two appearances in the Premier League this season and will hope to use this game as a catalyst to turn his fortunes around.

Mason Mount is likely to start on the opposite flank. The England midfielder will be tasked with adding creativity and energy to the Chelsea attack.

Lukaku’s absence means Kai Havertz should get the nod as a false nine. The German has played that role several times before for Chelsea and should have no trouble slotting in against a porous Norwich defence.