Manchester City have extended their unbeaten run in the Premier League to five matches following their 6-0 win over Nottingham Forest at the Etihad Stadium.

Having survived the Crystal Palace scare earlier in the weekend, City were keen not to repeat their mistakes when they hosted the newly-promoted side on Wednesday night, August 31.

Summer signing Erling Haaland was once again the man of the moment during the EPL cracker as he bagged his second hat-trick of the season against the Reds. 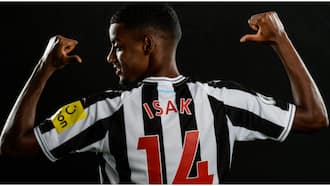 Haaland registered his first treble against Palace over the weekend, scoring thrice in City’s 4-2 thrilling comeback win over the Eagles.

The Norwegian picked from where he left against Nottingham as he took his tally to nine goals from five outings.

The Norway international doubled the advantage in the 23rd minute with a tap-in from close range, thanks to another Foden assist on the edge of the six-yard box.

Haaland completed his hat-trick in the 38th minute, nodding home a header across the face of goal from about a yard out.

Joao Cancelo and youngster Julian Alvarez joined the goal fest in the second half, with the latter bagging a brace in what was his full debut for the reigning champions. 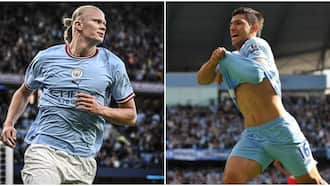 Efforts by the visitors to score at least a consolation proved futile as they fell to yet another defeat.

City’s huge win has them firmly in second on the standings after Arsenal won their own encounter against Aston Villa.

Earlier, Sports Brief reported that Premier League managers are reportedly consulting among themselves on how they can stop Manchester City striker Erling Haaland.

Haaland has hit the ground running, weeks after he sealed a stunning summer transfer to the Etihad Stadium.

The former Borussia Dortmund hotshot is currently leading the goalscorers charts, having already found the back of the net six times in just four matches.