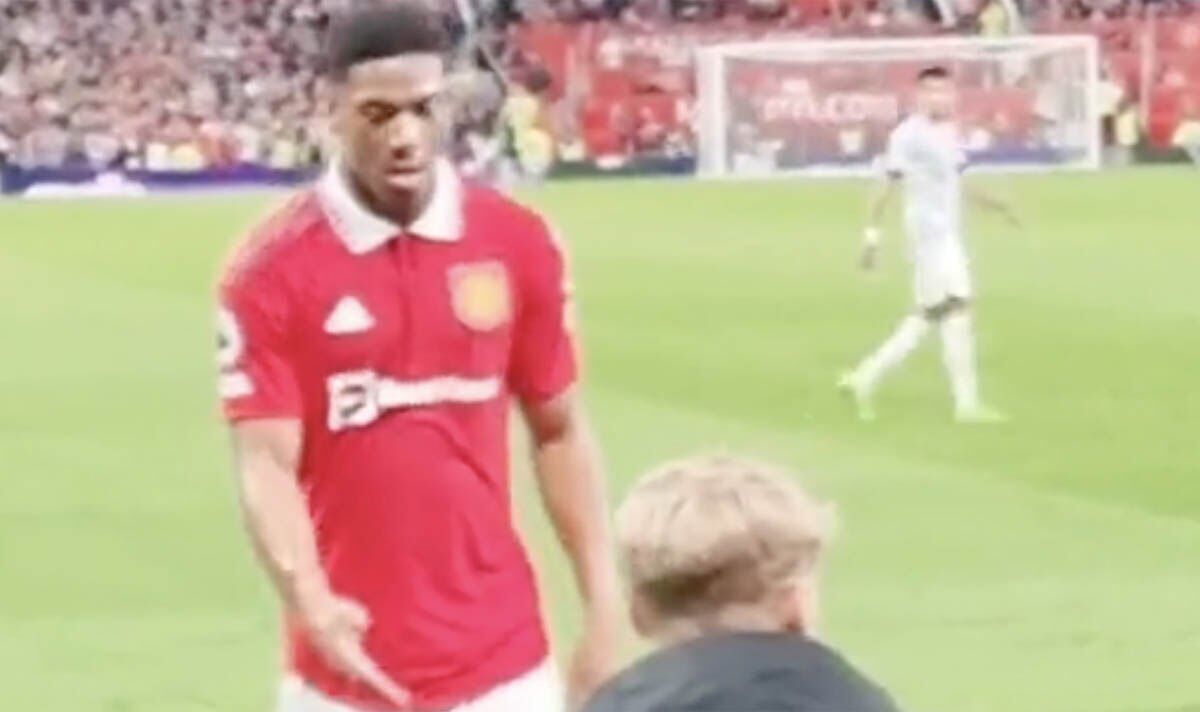 A clip of Anthony Martial is doing the rounds on social media after the Manchester United star appeared to tell a ballboy to slow down during the club’s 2-1 win over Liverpool on Monday night. Few gave the Red Devils a chance of claiming victory against Jurgen Klopp’s side. However, despite enduring a nightmare start to the new Premier League season, they were able to bounce back in style at Old Trafford.

Manchester United flew out of the blocks against Liverpool and should have opened the scoring earlier, with Anthony Elanga hitting the post in the first half.

However, in the 16th minute, Jadon Sancho showed remarkable composure to slot past Alisson Becker.

And Marcus Rashford doubled their advantage eight minutes into the second half, with Mohamed Salah netting a consolation for the visitors in the closing stages.

Martial was introduced for Elanga at half time and a video uploaded by @StettyEnd on TikTok, shared by @UtdPlug, shows him telling a ball boy to slow down when it came to giving him the ball in the closing stages.

And supporters have now reacted on Twitter, with many loving the 26-year-old’s antics.

“It is only a start. We can play with much more composure and much more danger. Be a team and have a good spirit – and that is what we saw today.

“It is not always about what I said. I said we have to act and not to talk a lot and make sure you are a team and battle and be brave and give each other options.

“It makes me happy that Rashford and Sancho got the goals. Fernandes took the responsibility and the captaincy encouraged him.

“He showed leadership with Varane. They made a huge difference. It is not just them; we need more leaders. When you want to win you need leaders and the spirit we showed today.

“I am happy with the performance but we have to bring it every game. Don’t just bring it against Liverpool. Every Premier League game is difficult, we need to bring it to every game. It starts, once again, with the spirit.

“I have a squad and we have to use the squad. We play 50-60 games, from game-to-game we will see what team we will pick.

“I don’t have to mention Maguire and Ronaldo – they are amazing players and they will play a role in the future and the short-term future as well.

“We have the right players, I am convinced of that. The window is not closed and you need numbers and also quality.”

Liverpool boss Jurgen Klopp, meanwhile, rued his side’s lack of aggression during the early stages as his side failed to win a third match on the trot.

“They were really aggressive in the beginning, it was clear what will happen,” he said. “They were more aggressive than us and they hit the post early on.

“They scored the goal and we took over and played the game we wanted to play. We were unlucky with situations against an opponent like United, it would have been helpful to score and go 1-1 at half time.

“The second goal does not help then it was a hectic game after our goal, definitely not the result we wanted.

“When we calmed down we have extreme number of shots for an away game at United. we should use more of these moments, the second half David de Gea made a fantastic save. If you score then the game turns then we did not have enough time or power in the end.

“When you are in a game like this fighting, these guys talk to each other and on the pitch it is a different conversation. It was not a perfect performance, it was clear United would get out of the blocks but we were not 100 per cent ready.

“We had to keep chasing the game and that is not what you want to do. It makes it difficult with their counter-attacking threat. The second goal is hard to take, it was offside, but we have to work with it.

“We are in a tricky situation injury wise, we got through the week with 14, 15 senior players available and now have to make sure they don’t get injured. We should have won this game, I know it sounds ridiculous but that is how I saw it.

“I am concerned about our situation, but that is how it is. We prepare for Bournemouth and Newcastle now.”