Chelsea will return to Premier League action on Saturday with a visit to the Community Stadium to face west London rivals Brentford.

The Blues are sitting top of the Premier League table with 16 points in seven games, with Liverpool in second and reigning champions Manchester City in third.

They went into the international break on a high by beating 10-man Southampton 3-1 and Thomas Tuchel will expect more of the same from his boys at Brentford, who have enjoyed a solid start to the Premier League season following their promotion this term.

Chelsea boss Thomas Tuchel has been boosted by the return of N’Golo Kante and Reece James to training ahead of the trip to Brentford. Kante has recovered after testing positive for Covid-19 while James has shaken off the injury that made him withdraw from the England squad for the World Cup Qualifiers against Andorra and Hungary.

Christian Pulisic has returned to training after overcoming an ankle problem but Chelsea faces an anxious wait over the fitness of Romelu Lukaku and Antonio Rudiger after they both suffered injury concerns while on international duty with Belgium and Germany respectively.

Plus, Tuchel will already be without Thiago Silva due to the Brazilian international not returning from South America in time to face Brentford.

Edouard Mendy is Chelsea’s undisputed no.1 and should start in goal against Brentford.

Due to Thiago Silva’s potential unavailability and injury concerns for Antonio Rudiger, Tuchel will be forced to alter things at the back. Trevoh Chalobah is likely to be handed a start with Cesar Azpilicueta and Andreas Christensen completing the back three. 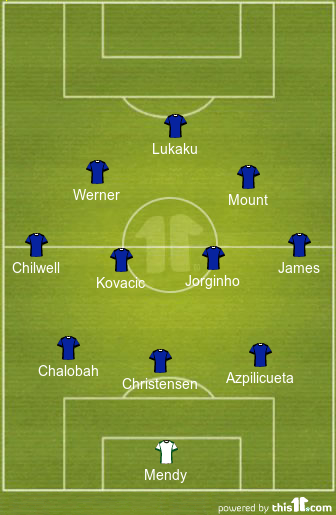 Reece James’ return to training is positive news and he could go straight into the Chelsea lineup. He will start at right wing-back with Marcos Alonso set to be preferred ahead of Ben Chilwell again for the left wing-back spot.

N’Golo Kante has recovered from the Covid-19, and is raring to go but Tuchel could go with Mateo Kovacic and Jorginho in the middle of the park at the Community Stadium. Kante and Ruben Loftus-Cheek are good options to have on the bench.

Mason Mount makes the Blues tick with his passing, movement and high work rate, so he is a certainty to start against Thomas Frank’s side. Timo Werner had a productive international break with Germany and should be eager to get himself on the score-sheet after his goal against Southampton at Stamford Bridge.

With Romelu Lukaku should start up top as Thomas Tuchel revealed the Belgian is fit to make the Chelsea lineup.