Visalli was found by Julia Simic’s cross in the second half of the weekend’s game, and the midfielder confidentially dispatched her headed effort into the bottom corner of the net for her second goal of the season.

The American was delighted to help the Irons secure the win against the Glovers, and said that her goal was predicted by the side’s general manager.

“I’m so happy to score, but it’s really weird,” Visalli told whufc.com. “Before the game I was talking to Russ, when I told him I was feeling really confident and I felt like I was going to score.

“He looked back at me and said he thought I was going to score as well, and he felt like it was going to be a header. It was like he just knew!

“I saw him straight after the match and he had a big smile on his face, just like I did! It was so weird, but I’m just happy to get the goal and help the side win another game.”

Sunday’s result at Yeovil gave Matt Beard’s side their third consecutive league win, and Visalli is delighted to end the 2018 FA Women’s Super League run with such an impressive vein of form. 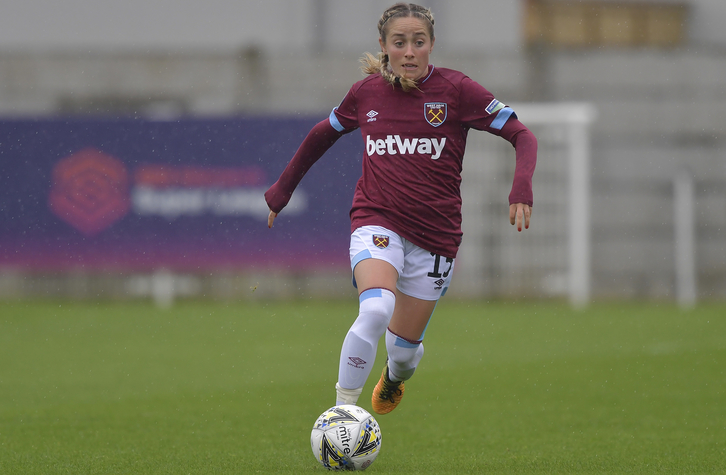 She continued: “We’ve been playing well and I feel like our win against Yeovil was us showing our best football so far this season. Whereas in the other games, we really had to grind out the results, we just played some brilliant football on Sunday.“Everyone was excellent. We were 3-0 up at half-time but we just wanted to keep that going in the second half. We didn’t let up and we deserved the result. It’s a great feeling.”

Up next for the Hammers is Charlton Athletic in the Continental Tyres Cup on Wednesday, and Visalli is eager to go into the festive break on the back of a fourth consecutive victory.

“We are now focusing on Charlton,” Visalli added. “We know they are doing really well in the division below us, and that we will need to be at our best to keep our winning run going.

“Hopefully we can end our 2018 with another good result!”