Neves in, Xhaka out? Why Arsenal want £35m Wolves star for midfield shake up – Goal India

Mikel Arteta is looking to revamp his squad this summer, and one of his mainstays at the Gunners could be on his way out

There have been few more divisive figures at Arsenal in recent years than Granit Xhaka.

Since he arrived in 2016 for £35 million ($49.4m) from Borussia Monchengladbach, Xhaka has polarised opinion amongst the fanbase.

There are plenty who love him, but there are just as many who have been desperate to see him shown the door in north London following a series of high-profile errors and controversies.

And now – five years after joining – those who fall into the latter category look like they are about to get their wish, with the Switzerland international edging towards a move to Roma.

But while there is no doubt that Xhaka has his faults, selling him is a big call by Arsenal.

His tendency to hand the opposition the occasional gift may have been a source of great frustration, but he has remained a key player under Arsene Wenger, Unai Emery and now Mikel Arteta.

Since the start of the 2019-20 season, Xhaka has made 86 appearances in all competitions for Arsenal. Only Nicolas Pepe (89) has made more.

But of those 86 appearances, 81 were starts. That is more than any other outfield player.

It is a clear sign of just how important the 28-year-old has been to Arteta since he replaced Emery in December 2019.

Arteta trusts Xhaka and he respects him, not just because of the way he performs on the pitch, but by the way he acts off it.

“He has got a big importance in the dressing room,” Arteta said when discussing Xhaka’s qualities towards the end of last season.

“And if you have to put an example on that pitch about character, then probably it’s him.

“He’s played more minutes than anybody else, but he keeps going, even when he is so tired. He tries to help the team in the right way.” 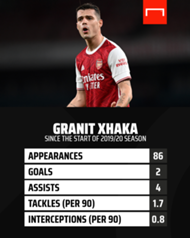 When Arteta was appointed 18 months ago, Xhaka looked to be on his way out of Arsenal.

He had just been stripped of the captaincy by Emery after his ugly spat with the Arsenal fans when he was substituted during a game against Crystal Palace and a return to Germany looked imminent.

But one of Arteta’s priorities when he walked through the door was to convince Xhaka to stay. It was an objective he achieved and the midfielder has been a mainstay in his side ever since.

So why is Arteta about to allow him to leave?

The fact is Xhaka is now 28 and will turn 29 just a month into the new season. He has two years left on his contract in north London, and all parties feel it is the right time to part ways.

That is why talks with Roma are progressing amicably, even if the Italian side are yet to come in with a bid that the Gunners feel is acceptable.

Arteta has spoken several times about the need for Arsenal to be ruthless this summer and selling the lynchpin of your midfield is exactly that.

But the Spaniard knows that if his side are to improve on two successive eighth-placed finishes in the Premier League, then changes must be made and that reshaping his midfield is key.

That is a process that started last summer with the addition of Thomas Partey from Atletico Madrid, and now the next stage is bringing in a long-term partner for the Ghana international.

One of their targets is Ruben Neves, and discussions have been held with Wolves over the Portugal international.

At 24, Neves is viewed favourably by Arsenal. He has Premier League experience, is a leader and a look at his statistics show why Arteta is open to bringing him in.

Neves has plenty of the attributes Xhaka has and that will be appealing to the Spaniard, who likes to have a progressive ball player at the base of his midfield. 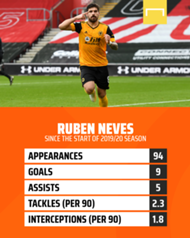 On average, Neves makes 65 passes per game; that’s just five fewer than Xhaka and although his passing accuracy of 83.1 per cent is again below Xhaka’s (89%), that is down in large part to Neves’ tendency to look for more long, high-risk passes out wide to the full-back areas.

Arteta wants to build a team at Arsenal that presses with intensity and wins the ball back quickly.

And while Partey’s arrival has helped with that in the centre of midfield, the addition of Neves should certainly improve things further, judging by his numbers during the past two years with Wolves.

Since the start of the 2019-20 season, Neves has averaged 2.3 tackles per game, more than Xhaka’s 1.7. He also makes 1.8 interceptions per 90 minutes and 8.1 recoveries. Again, that puts him ahead of Xhaka on both counts, with the Gunners star averaging 0.8 interceptions and 6.6 recoveries.

So defensively, the addition of Neves could certainly improve Arsenal and offensively he offers more of a goal threat in the final third, having scored nine times in the past two seasons for Wolves, although four of those did come from the penalty spot.

So you can see why Arsenal are keen on Neves and view him as a potential long-term partner for Partey, but one reason why his potential move to Emirates Stadium is dividing the fanbase is his lack of mobility.

While a lot of fans want to see some genuine athleticism added to the midfield, Neves certainly appears more of a like for like replacement for Xhaka.

He is technically solid and good on the ball, but lacks the sort of pace and dynamism that makes Brighton’s rising star Yves Bissmoua so appealing to supporters.

For Arteta, however, the positives could outweigh the negatives.

Neves has the ability to strengthen Arsenal’s midfield, he has the leadership qualities to help counter the loss of Xhaka and at 24, he has the capacity to improve and add far more to his all round game.

Whether he ends up being the man to replace Xhaka remains to be seen, but it is clear to see why Arsenal and Arteta are keen on signing the Portugal star.