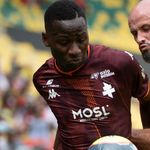 Tottenham have agreed a deal to sign exciting Metz midfielder Pape Matar Sarr for a fee in the region of £14.6m plus add-ons.

The 18-year-old is undergoing a medical on Tuesday but will not be part of Nuno Espirito Santo’s Premier League squad this season.

Tottenham’s deal with Metz includes a loan back to the Ligue 1 side for the remainder of 2021-22.

Sarr only joined Metz as a development player from Generation Foot less than a year ago, but his talent quickly shone through and he became a regular in the club’s first-team, scoring four goals in 25 appearances.

He has featured in all three of their Ligue 1 games so far this season, although none have ended in victory.

Sarr is expected to be in attendance at Tottenham’s home clash with Watford on Saturday, meaning he will miss Metz’s next game against Clermont on the same day.

Spurs are reported as having beaten off competition from five other clubs to secure Sarr, who also made his senior international debut for Senegal earlier in 2021.

He is understood to be signing a six-year deal after agreement was made on personal terms once a deal was concluded between the clubs during a visit to England by Metz president Bernard Serin.