Ugandan athletes who won medals at the just concluded Tokyo Olympics will be gifted a car and have houses built for their parents, according to President Yoweri Museveni.

Museveni spoke at the Kololo Ceremonial Ground on Wednesday where he received Ugandan athletes who did the nation proud in the just concluded Tokyo Olympics.

It was during this reception that the Uganda head of state renewed his promise to grant all athletes who clinched a medal at the Olympics a reward which entails a brand new car and a house for their parents. 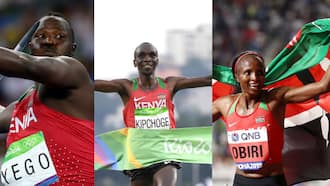 “I made an order in 2013 that anybody who wins gold at a continental level, commonwealth or Olympics should be paid KSh 154000 per month all the time and UShs1 million (KSh 30,000) for silver and bronze medalists. It was not honored,” Museveni said as quoted by Daily Monitor UG

“I was told they are being paid quarterly. I didn’t say quarterly. I speak English very well. All their areas will be paid. What they should have been paid. And because I’m now a happy man, I will give each of these medalist a car. I will build for their parents a house each,” he went on.

The Uganda Olympics team returned to the country on Tuesday, August 10 and were accorded a grand welcome, with photos doing rounds on social media exhibiting the royal treatment they were subjected to upon arrival. 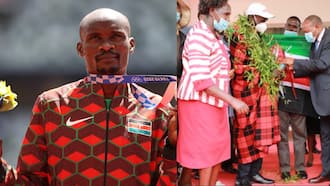 Uganda was the second-best performing country at the Olympics in Africa behind Kenya, despite only collecting a total of four medals.

Joshua Cheptegei won gold in the 5000m men’s final and managed a silver in the 10000m while Jacob Kiplimo managed to clinch bronze in the 10000m.

The country’s other gold medal came from Peruth Chemutai, who powered to victory in the women’s 3,000m Steeplechase final.

Museveni also boldly declared his country performed better at athletics than other counterparts because they are “naturally gifted”.

“I read an article recently saying that it was a miracle for Uganda to win medals…because Kenya spends KSh 14 billion on sports, while South Africa spends over KSh 6 billion and that in Uganda we spend about KSh 500 million.”

“This was not a miracle. The fact of the matter is that Uganda is uniquely endowed by both the natural resources and the human resource. The unfortunate thing is that some people don’t see this and they are trying to mess up some of the endowments like the environment” The President observed.

In recent times, Uganda has upped her game in terms of giving back to athletes who committed their careers to the country.

Former Uganda Cranes Captain Denis Masinde Onyango was on Thursday, May 6 honoured with a brand new Pajero Sport after ending a 16-year spell with the country’s national football team.

Onyango’s gift came barely a year after the goalkeeper called out the Uganda government over a botched promise to gift the national team KSh 100 million.