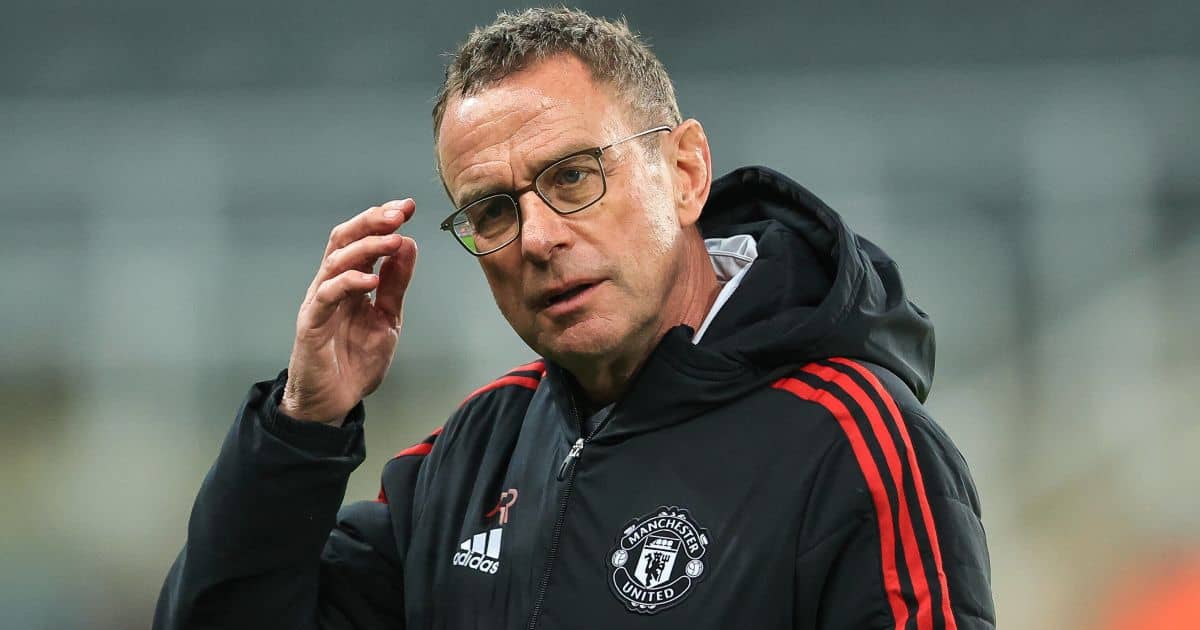 Manchester United boss Ralf Rangnick has warned his players to up their physical workload in games in order to compete in the Premier League.

The interim-coach, who took over at the start of last month, has not seen the honeymoon period he would have liked at Old Trafford. The German coach has drawn two and lost one of his six Premier League games and there has been no visible improvement in their style of play.

That has led the veteran coach to publicly call out a squad, he believes is divided.

Ahead on Monday night’s FA Cup third-round clash with Aston Villa, Rangnick was withering in his assessment of the team. The former RB Leipzig boss demands an energetic, high-pressing game from his charges, but so far United have not delivered.

In fact they sit bottom of the official Premier League table for “high claims” this season, with just seven. The leading team Brighton have managed 35.

While, United’s running metrics after the first nine games of the season ranked the club 14th for distance covered in the Premier League.

Ole Gunnar Solskjaer’s team recorded lower distances in seven of those fixtures. And things have not improved under Rangnick’s tutelage.

“This is the only way we can compete in this league and at that level,” said Rangnick, who wants his players to work harder.

“This is what we have to do. We have to develop into this kind of team.

“I said after the first game against Crystal Palace, we showed at least in the first half a lot of those things and it’s about implementing this into the team in a sustainable way.

“This is our job and we have to do it together with the players and we have, obviously, to develop the players, identify for each game, the players who are willing and able to do that and to deliver.”

Rangnick believes he is not asking his players to do something they are incapable of. And pointed to the wins over Burnley and Crystal Palace in which they pressed their opponents effectively.

“The team is able to dominate games, to win games. Both games against Burnley and Palace that was the case and this is exactly what we have to achieve in the next weeks to help the team develop into a dominating team.

“This can only be done in possession and out of possession they do things together,” said Rangnick.

The 63-year-old has though hinted at division in the camp. He is well aware of players that are unhappy with their playing time and has pointed to Edinson Cavani as the “role model”.

Cavani, who has been linked with a January move, has confirmed he is not leaving before his contract is up in the summer.

“Edi told me that I can rely on him to stay until the end of the season and give his very best and be a role model for the young players.

“If he plays from the start, he’s available and he’s happy to play. But even if he’s not playing, he will be trying to be the best possible role model for the other players.

“It is good news because Edi if one of those players with his vast amount of experience, with his mentality, his work ethic, I think he could really be a perfect role model for the other players.” added Rangnick.