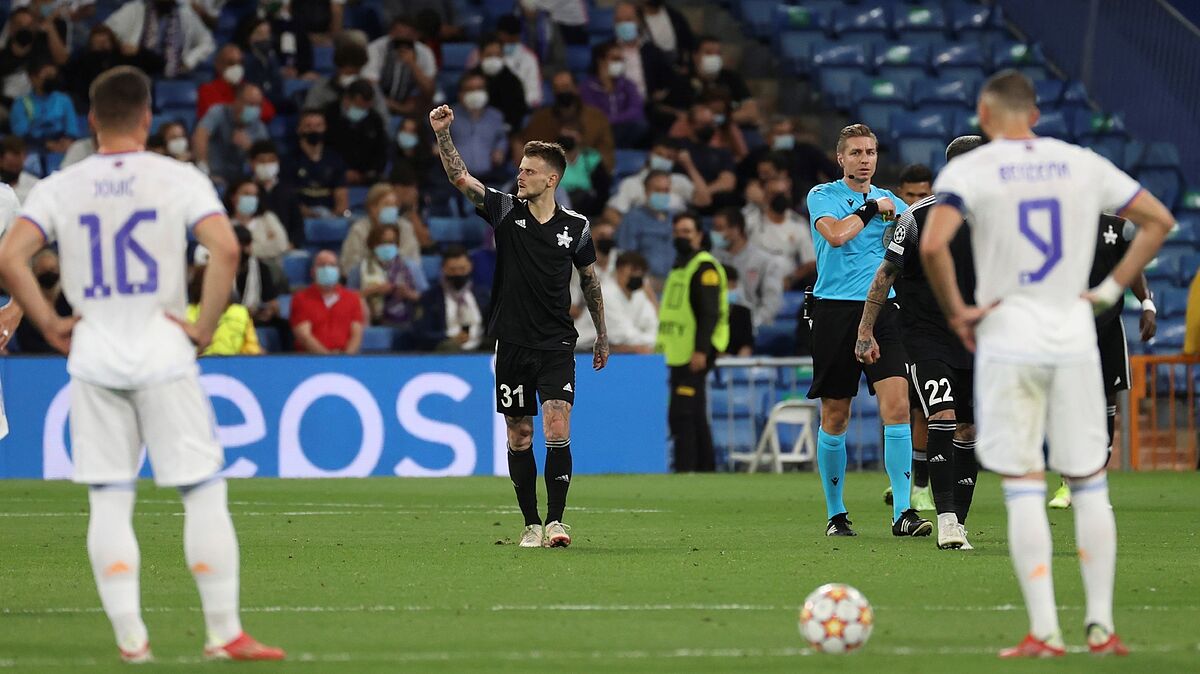 Real Madrid suffered one of the most stunning and shocking defeats in their gilded European history with a 1-2 loss to Sheriff Tiraspol in Group D of the 2021/22 Champions League on Tuesday night at the Estadio Santiago Bernabeu.

The upstart visitors jumped out to a 1-0 lead, but a strong second half from Los Blancos, including a Karim Benzema penalty conversion, had everyone believing that the 13-time European champions would pull through like always.

But the narrative was turned on its head on a firecracker of a goal from Sebastien Thill, who surely sent shockwaves not just through the Spanish capital but also the entire continent with a late strike that will forever live in Sheriff folklore.

To no one’s surprise, Real Madrid came out on the front foot, but had to wait a bit before the first chance came when Benzema fired a free-kick that was parried away by Sheriff goalkeeper Giorgos Athanasiadis, who was nothing short of superb the entire night.

Sheriff were hanging tough and midway through the half they stunned the Bernabeu by taking a surprise 0-1 lead. A counter-attack ended with an inch-perfect cross from Cristiano for the unmarked Jasurbek Yakhshiboev, whose header beat Real Madrid goalkeeper Thibaut Courtois.

Real Madrid got right to work to try to pull themselves level, but an error from Courtois almost resulted in a second for the guests, with Yakhshiboev hooking a shot just wide.

Ancelotti’s men continued to hammer the Sheriff area, but could only shake their heads when Vinicius, Hazard and Benzema failed to finish chances just minutes apart.

Real Madrid’s dominance carried into the second half as they peppered the Sheriff area, yet the visitors stayed compact and were resolute in their defending. Minutes after Hazard had a crack from outside that forced Athanasiadis into a diving save, Real Madrid had a big penalty shout when Vinicius went down in the area after a clip from Fernando Costanza, but VAR said otherwise and play continued.

Vinicius kept at it, and moments later VAR would rule in Real Madrid’s favour for an Edmund Addo foul on the Brazilian in the Sheriff area. Benzema was tasked with penalty duties and promptly deposited the spot kick into the back of the net to make it 1-1.

Right after the goal, Ancelotti went to his bench and made four changes, with Toni Kroos, Modric, Luka Jovic and Rodrygo all entering the pitch for Miguel, Casemiro, Hazard and Nacho respectively.

Vinicius was the player doing the damage for Real Madrid and a deflected effort almost fooled Athanasiadis for the home side’s second of the night. That was then followed by chances for Modric and Eder Militao, but once again Athanasiadis stood tall to make the saves.

All of Real Madrid’s attack was coming through Vinicius on the left wing and a cut-back pass from Rodrygo was begging to be finished, but instead it went over the crossbar.

The desperation of the Real Madrid attack and the supporters inside the Bernabeu was felt on every chance that went by the wayside, including a Jovic one in front of goal in the final minutes.

There was still the sensation that a winner would come, but nobody would have ever guessed that it would be Sheriff to do it, but that’s exactly what happened in the final minutes when a ball fell perfectly for Thill, who took it on the bounce and fired an absolute bullet into the left corner of net to deliver the shock 1-2 victory.