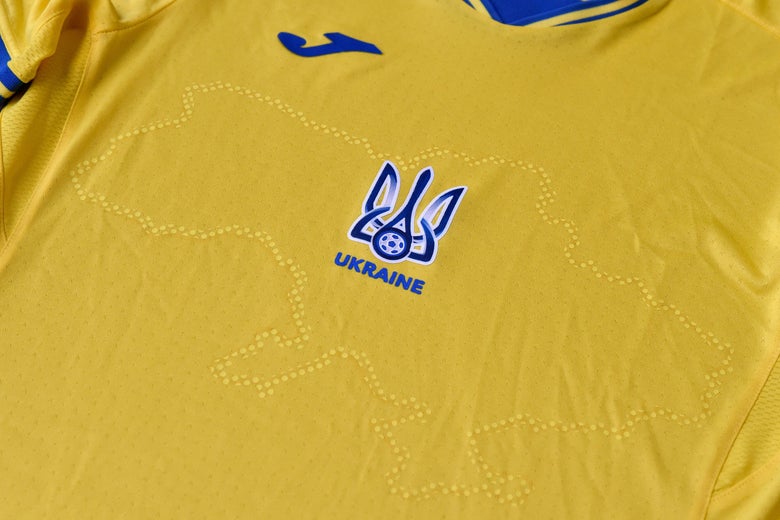 Euro 2020 kicks off Friday, a year late, but not without some intra-continental squabbling. The soccer championship pitting the continents best national teams against one another is a quadrennial affair and second only to the World Cup in prestige and competitiveness. That’s to say, it’s a big sporting stage, and one that a certain participant plans to use to make a point. Ukraine unveiled its tournament jerseys over the weekend, which include a silhouette of the nation’s borders on the players’ chest. The map’s faint outline encompasses the region of Crimea, a move seen as a stealth political barb over Russia’s 2014 annexation of the Black Sea territory.

In response to the jersey, Russia, which is also participating in the tournament, first squawked and then lodged a formal complaint Tuesday to UEFA, Europe’s governing body for soccer, about the jersey. Russia then started doing Russia things, namely making reality-bending statements meant to muddle. A Russian MP called the shirt a “political provocation.” Foreign ministry spokeswoman Maria Zakharova declared the jersey “attached Ukraine’s territory to Russia’s Crimea” creating “an illusion of the impossible.” Kremlin spokesperson Dmitry Peskov also glossed over the Russian-backed separatist movement that sparked the conflict that persists in Ukraine. “Sport is sport,” Peskov, having a kumbaya moment, told journalists Monday. “We need to be above inciting hatred between Russians and Ukrainians.” Yes, indeed, Dmitry.

The Ukraine jersey, however, had been approved by UEFA, which generally prohibits political statements on team kits, because despite Russia forcibly swiping Crimea from Ukraine, it remains an almost universally unrecognized border change. UEFA allowed the jersey map citing a United Nations General Assembly Resolution that “recognizes the territorial borders as broadly depicted by the design.” So, instead, Russian officials focused on the phrases “Glory to Ukraine!” printed in small lettering above the players’ names on the back of the shirt and “Glory to our Heroes” inscribed inside the collar. Those slogans, too, were approved by UEFA. But this week Kremlin officials pushed claims linking “Glory to Ukraine” to the Nazis and attacked “Glory to our Heroes” as a political slogan used during the sweeping Maidan protests in 2014 that lead to the ouster of Ukraine’s Kremlin-backed president Viktor Yanukovych.

A daily email update of the stories you need to read right now.

The Russian pressure forced UEFA to reconsider and, on Thursday, the body reversed course, demanding that Ukraine remove the phrase “Glory to our Heroes” from the kit handing Russia a queasy soft power victory. There appeared to be but one complaint about the slogans—Russia’s. All Russia wanted to do was flex, display its influence on its smaller neighbor, that even on the pitch it could exert control, and it worked. “Become sporting heroes and you will have glory,” foreign ministry spokeswoman Zakharova crowed after the decision. “Do it that way and not with nationalist slogans saying the motherland should be glorified.”

Slate is covering the stories that matter to you. Become a Slate Plus member to support our work. Your first month is only $1.