Jadon Sancho was handed his first start at Euro 2020 by manager Gareth Southgate in their quarterfinal clash against Ukraine on Saturday.

The 21-year-old wasn’t named on the bench for England’s opening group game against Croatia and since then, he has made just one substitute appearance.

In fact, Borussia Dortmund’s Erling Haaland took to social media and called for Sancho to be introduced as England and Germany Round of 16 game was goal-less at half-time.

Former Chennai Super Kings batsman Billings, who earlier expressed his happiness with Sancho moving to Old Trafford, was left in splits as he came across a meme of Southgate only handing a start to the 21-year-old following his transfer to Manchester United! 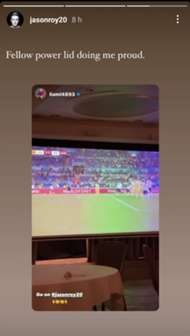 In the second half, Harry Kane was brought down by Serhiy Sydorchuk and from the ensuing free-kick delivered by Luke Shaw, Harry Maguire rose highest and planted his powerful header beyond the reach of Heorhiy Bushchan into the bottom-left corner.