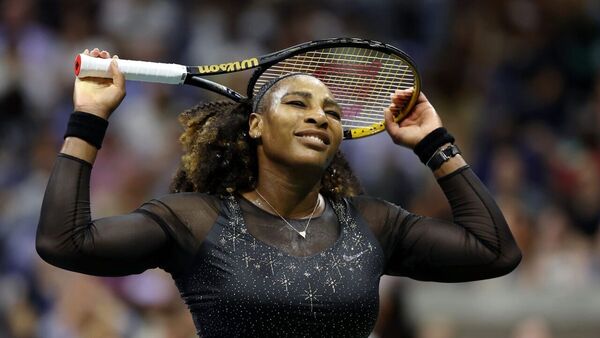 Waving everyone good bye, an emotional Serena said, “I wouldn’t be Serena if there wasn’t Venus. So thank you, Venus. She is the only reason Serena Williams ever existed.”

Williams lost to Australia’s Ajla Tomljanovic in three sets at Arthur Ashe Stadium in New York on Friday, a day after she and her sister Venus exited the doubles competition after a first-round loss.

Serena has been an inspiration to many – from children to adults and has been the most successful female tennis players. Both the sisters, Serena and Venus took the tennis world by storm when they emerged from the courts of crime-ridden Compton, California as teenagers and went on to dominate and change the face of the predominantly white sport.

Throughout her career, Serena has been associated with many big brands like Nike, Wilson, Intel, Lincoln Motor Company and many others. Female athletes have long had to fight for what they’re worth, from sponsorships or institutional pay.

The sports icon has worked with a number of brands, beginning with a five-year Puma SE sponsorship at the beginning of her career that was valued at $13 million, as per Bloomberg report. A longstanding partnership with Nike Inc. followed in 2003, which has grown to include an in-house incubator for fashion designers. The company has also dedicated the largest building on its Beaverton, Oregon, campus to her. “The thing about Serena is she’s going to transcend sport,” said Tanya Hvizdak, the vice president of global women’s sports marketing at Nike. “She’s been able to show it’s beyond performance. Obviously that’s provided her a platform, but her engagement in so many different other aspects and showing the dimensions of herself, whether it’s as a mother or a champion of diverse designers or other aspects, will be her legacy.”

Jeff Kearney, global head of sports marketing for Gatorade, said Serena has made a permanent impact on marketing budgets everywhere and her overwhelming success convinced the Pepsico Inc. division, which first partnered with Williams in 2009, to spend more on female athletes.

“Across brands and the different companies she works with, they’re investing more on the women’s game,” said Kearney. Another major sports sponsor, Anheuser-Busch InBev SA’s Michelob Ultra beer brand has been associated with Williams in the late stages of her career, with Super Bowl ads such as one alongside WNBA star Nneka Ogwumike and Women’s World Cup champion Alex Morgan. Ricardo Marques, vice president of marketing, said Williams played a pivotal role in boosting dollars spent on women in sports.

“Serena was a catalyst,” said Marques. “She gave confidence to brands like us to come forward and put these commitments, dollars, to make that support more visible.”

Apart from this, Delta Air Lines Inc. and JPMorgan Chase & Co. have also been sponsors. In 2017, Tech giant Intel partnered with Serena. In 2018, Serena associated with Lincoln, which is an American luxury car maker owned by Ford where she endorsed Lincoln’s Navigator SUV. In 2018, Serena Williams has launched her own apparel line called Serena. When she appeared in an inspirational Chase commercial, it showed her return to the game following the birth of her daughter. Her other brands also include Gatorade, Beats by Dre, Audemars Piguet, Bumble, IBM.

The US Soccer Federation announced only this year that male and female athletes would be compensated equally, and pay disparities persist for female golf, basketball and tennis players. Nike also changed its pay policies for pregnant athletes after runner Allyson Felix and others alleged that they were mistreated during their pregnancies. In March, the company also unveiled a new think-tank initiative, which includes Williams and 12 other Nike-sponsored female athletes. According to Celebrity Net Worth, Serena William’s net worth is an estimated $250 million.

Support of Brands and Beyond

Support of brands also includes standing by Williams and other athletes as they navigate inequities baked into tennis. The Williams sisters were both made to endure racism throughout their careers, and Serena is no stranger to calling out double standards and unfair treatment. Her sponsors have followed suit. After the French Open objected to a jumpsuit she wore to the 2018 tournament, Nike tweeted its support.

“Support in those moments is key because not only does raise an element of yes, that was in the arena of sport and us supporting that athlete, but even more so, women’s rights and opportunities in that aspect,” said Hvizdak. That the jumpsuit supported Williams in both design and functionality — it provided compression to help with blood clots — underscored Nike’s commitment to work with Williams and other female athletes with regard to what they individually need, she added.

“You’re seeing the money come into play, but there needs to be more of it industrywide,” said Nike’s Hvizdak. “We continue to lead in this space and we need to pull people with us. That’s the goal.” And although Williams may soon be bidding the tournament circuit farewell, brands aren’t moving on from working with her if she’ll have them. “Her name is always at the top of the list, Gatorade’s Kearney said.

“Her name is always at the top of the list,” said Gatorade’s Kearney.

Meanwhile, Williams, who turns 41 later this month, plans to “evolve” away from tennis following the US Open campaign. She has also written her first children’s book which will be on sale in September end.

She also clarified she will re-direct her curiosity and drive into her investment firm, Serena Ventures. She’ll kindle her spiritual life. She’ll evolve as a mom. “I think I’m good at it,” she says of parenthood. “But I want to explore if I can be great at it.”

Speaking about her next, i.e. Serena Ventures, she told Vogue earlier this month, that the investment firm has now funded 16 companies valued at $1 billion or more, and that 78 percent of its portfolio are companies started by women or people of color.

Catch all the Sports News and Updates on Live Mint. Download The Mint News App to get Daily Market Updates & Live Business News.

* Thank you for subscribing to our newsletter.