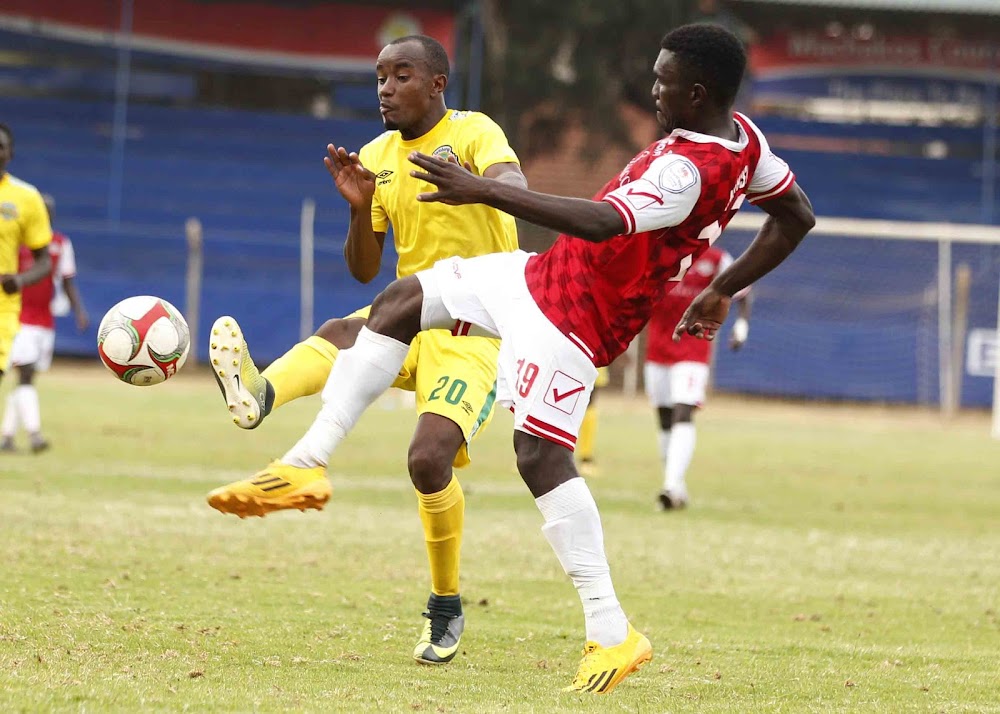 Western Stima slowed down Kariobangi Sharks’ quest for a maiden top-flight title after holding them to a two-all draw in the only Football Kenya Federation Premier league encounter of the the day at Thika Stadium on Monday.

But despite their mojo, Stima were soon to eat humble pie. Golden boot contender Eric Kapaito capitalised on Vitalis Akumu’s grave howler to put Sharks ahead in the 14th minute, effectively sending his season’s goal tally to 17.

Stima stumbled upon a glorious opportunity to restore parity in the 21st minute when Tom Teka sent Baron Oketch tumbling down in the area for a penalty.

It was, however, Olango’s moment to bask in glory as the shot stopper threw himself on the path of Oketch’s resultant kick to maintain the scoreline in Sharks’ favour.

Then in the 36th minute, Patilla Omoto shuffled his feet past his markers while anticipating a clinical finish. But when he was just about to complete the job, Rogers Ouma lunged at him and left him sprawling in the area. Kapaito stepped up to double Sharks’ advantage, fattening his tally in the process.

Referee Badir Yassin should have slapped Ouma with a straight red card but he seemed lenient, given six minutes earlier, the forward had been cautioned following a rash challenge on Olango in the heat of a goalmouth melee.

Undeterred, Stima took the fight again to their opponents, and on the stroke of half-time their efforts bore fruits when Akumu rose unmarked to head in Oketch’s well calibrated delivery into the area.

Stima apparently emerged from the tunnel with an upped voltage. In the 52nd minute, Oketch’s effort from a set piece 20 yards out was cleared on the line by centre-back Kuol, Ojunga missing the target by a whisker on the second bite of the cherry.

Then in the 71st minute, Oketch was to redeem himself from the missed penalty when he came on the end of a long range pass to level the terms. The outcome leaves Sharks fifth on the log with 35 points while Stima remain second last with 17.