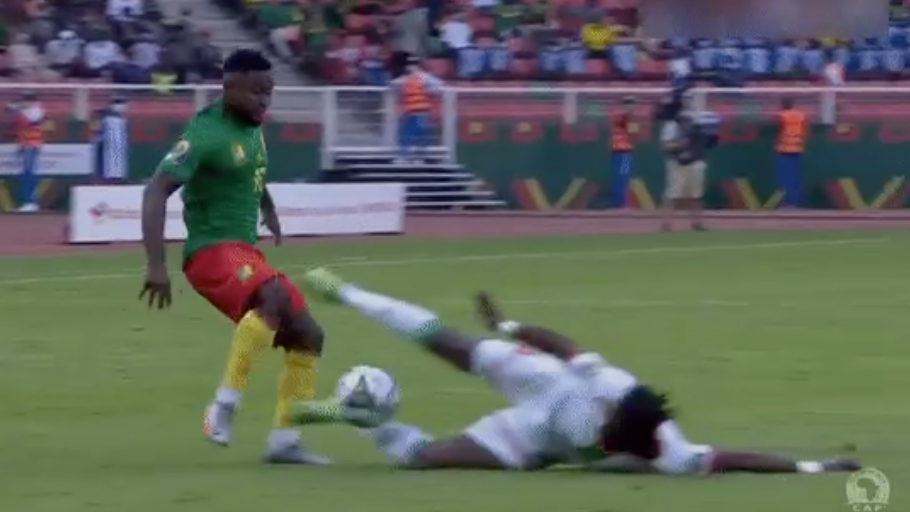 It took Burkina Faso’s Steeve Yago just 40 seconds to pick up the first yellow card of the African Cup of Nations, after a poor challenge on Collins Fai.

With most of the continent’s best players ready to get underway, although not all of them, it was hosts Cameroon who had the honour of kicking things off, against Burkina Faso.

It took just 25 seconds from the opening whistle for the action to really get going, as Yago went in on Fai, with an extremely poor sliding challenge.

The referee had no problem issuing Yago with a yellow card, picking up the first caution of the tournament just over half a minute into proceedings, impressive!

The first yellow card in the African Cup of Nations 2022 (AFCON) in the opening 2 minutes of the game. That would have been a red card if that happened at any other point in the game pic.twitter.com/Qjxu9bQkHs

— Has the Referee or VAR made a poor decision? (@PoorEPLreferees) January 9, 2022

Burkina Faso’s Steeve Yago was booked after 40 seconds of their opening #AFCON2021 match with Cameroon.

That was the fastest yellow card given in an AFCON tournament match since André Ayew for Ghana vs. Angola on 24 January 2010 (31 secs). pic.twitter.com/KIVAygwaWy

40 seconds into AFCON and there should have been a red card , Steeve Yago for Burkina Faso with a two footed tackle but it’s only given as a yellow #AFCON2022

I will now forever remember Steeve Yago as the man with the crazy tackle in the first minute of the 2022 AFCON.

On a day when football fans might have been hoping for more shocks from the FA Cup third round, especially with Tottenham Hotspur and Liverpool going behind to lower league opposition, Burkina Faso then delivered one by opening the scoring.

After just 24 minutes of the opening match, Gustavo Sangare opened the scoring with a brilliantly taken volley, following a passage of play that also saw his team hit the woodwork.

However, Kamou Malo’s side were unable to keep hold of their lead for too long, as Cameroon soon equalised from the penalty spot, in the 40th minute, with Vincent Aboubakar slotting it home.

Aston Villa’s Bertrand Traore, who set up his side’s goal, attempted to win the ball in the box but didn’t get to it and took out Fulham’s Andre Zambo Anguissa, with the referee eventually giving the decision after the VAR official told him to check the screen.

Cameroon had their second penalty of the game in injury time at the end of the first half, this time it was Issoufou Dayo’s to make a reckless challenge, and Aboubakar doubled his tally.

It’s been a hell of a hectic start to the tournament, may it continue throughout the month!